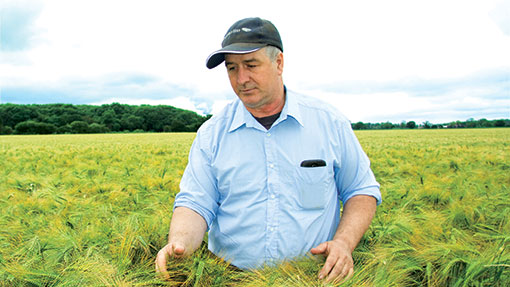 The promise of higher yields was enough to tempt Yorkshire grower Neil Welburn to try hybrid winter barley, with his first crop drilled in autumn 2010.

Despite this initial attempt being a disaster, he stuck to the task and is now in his fourth year with the crop, growing Syngenta’s hybrid six-row variety Volume.

“We’re high-input, high-output farmers. So an opportunity to push yields a bit higher was too good to ignore,” he says.

Winter barley has always been grown on the farm, with malting barley in the rotation until thirty years ago. “But once the premiums took a dive, we made the decision to grow feed varieties,” he adds.

That coincided with the establishment of a 600-head bull-rearing enterprise, which used all the barley produced. This year, half of Mr Welburn’s winter barley area will be crimped, in order to produce the best quality feed possible for the cattle, as well as maximising yields.

He is comparing Volume to one of the highest-yielding two-row feed varieties, Glacier, this year. His original intention was to grow equal areas of each, but he has ended up with 38ha of Volume and just 2ha of Glacier.

At the end of May, the hybrid barley crop looked better and the plants had a thick stem and showed vigorous growth.

Mr Welburn admits that his previous experience with hybrid barley has helped him to fine-tune the agronomy and adapt accordingly.

“The first year’s disaster was due to the crop being drilled far too late, just ahead of a very cold winter. It wasn’t the barley’s fault – everything was against it,” he says.

In the second year, he achieved a yield of 8.6t/ha from Volume and 7.4t/ha from a conventional two-row barley.

“The hybrid barley got hit by a bad BYDV [barley yellow dwarf virus] infection, but it still managed a very respectable yield. There was a clear line between the two varieties in the field, showing its susceptibility to BYDV,” Mr Welburn adds.

“We’re high-input, high-output farmers. So an opportunity to push yields a bit higher was too good to ignore.”
Neil Welburn

But last year’s results were the best he has ever recorded from winter barley. A final yield of 10.28t/ha showed Volume’s potential, and he is hopeful of beating that figure this year.

“We’ve got a weighbridge on the farm, so we can check all our yields,” he adds.

He uses a seed rate of between 90-105kg/ha for hybrids, depending on soil type.

“The seed is a bit more expensive, even at these lower rates. Due to the BYDV threat, it will have Deter seed dressing on it this autumn, which pushes the cost up further,” Mr Welburn says.

His normal practice is to drill the barley before the wheat, starting on 10 September, and he says the seed needs to go in when the weather is dry.

This coming autumn he plans to plough after wheat to bury any blackgrass seed, and then create a stale seed-bed which can be sprayed off before drilling. “That’s if everything goes according to plan. Blackgrass is becoming a real threat to cereal production,” he says.

The more vigorous, bigger plants produced by the hybrid barley is important to his weed control efforts, and he hasn’t seen any blackgrass in the barley yet, so the competitiveness has worked for him to a degree.

The only potential downside of hybrid barley is that the grain can have a lower specific weight. “It isn’t as bold as some varieties. But as we don’t sell it, there hasn’t been any issue with the grain for us,” Mr Welburn adds.

He is keen to see how Glacier performs this year. He has a target yield of 7.5t/ha for a conventional variety, but has managed as much as 8.6t/ha in the past.

Mr Welburn grows winter barley instead of second wheats, finding it difficult to get high yields from second wheats and having to spend more on them.

The wheat is all grown for the soft biscuit market, to meet local demand from a mill that is just three miles from the farm.