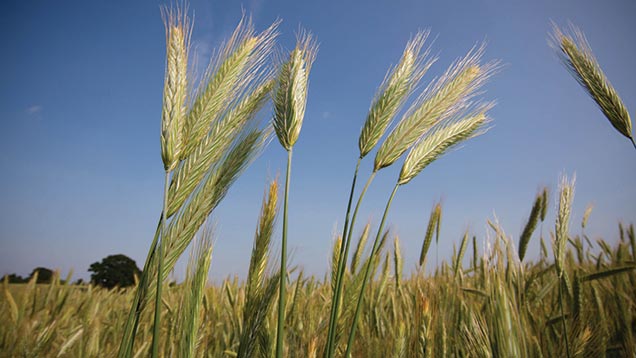 Hybrid rye could eventually take a chunk of the UK wheat area by delivering attractive margins and bringing major rotational benefits as well.

Rye has traditionally been grown for milling, but during the past couple of years the area of hybrid rye has increased as a result of the crop being grown as a feedstock for biogas plants.

See also: The rye way to feed your anaerobic digester

Yet for growers who cannot tap into the AD market or grow on a milling contract, Agrovista’s Craig Green believes there could be interest in other opportunities in the feed market, either for wholecrop or grain if more varieties suitable for grain harvest come on to the market.

And in Denmark, rye is set to become the main cereal for its cattle pig sectors.

Even with the new markets, growers will only select hybrid rye if it delivers a better gross margin compared with wheat. This is likely to be on lighter soils, where it performs well due to its extensive rooting system, which scavenges efficiently for nutrition and where wheat would drought off, he says.

Input costs are lower with less nitrogen required and reasonable fungicide costs compared with wheat. Crown rust and mildew are less demanding and older chemistry such as triazoles and strobilurins can be used, although doses must be maintained to prevent resistance developing, he adds.

The biggest constraint for growers will be its height – it reaches to almost six feet, which means no scrimping on growth regulation.  And although it is billed as a lower-input crop, Mr Green is keen to point out that it shouldn’t be seen as a cheap crop to grow.

But rye need not be restricted to the lightest soils. “The better quality soils you give it the bigger the yields.”

And Mr Green believes it could also find a position on farms where blackgrass is proving problematic.

Agrovista’s trials across the UK have demonstrated the smothering capability of rye and the effect it has on diminishing blackgrass populations by cutting out the light that reaches the base of the plant. Whole-cropping before any remaining seeds are viable then prevents any further seed return.

Therefore, in medium-pressure situations where the gross margin of wheat is already suffering because of blackgrass, or growers are considering a switch to spring wheat, rye could offer a viable alternative.

For growers with cattle it is ideal as a wholecrop, yielding about 36-41t/ha freshweight, he says.  And even those choosing to harvest the grain for feed and incorporating the straw back into the soil can reap additional benefits.

“There is a massive potash reserve in the stalks, which can help build organic matter and improve the water retention ability of the soil.”

With evidence suggesting rye can deliver equivalent nutritional feed value compared with wheat or barley, it could replace other grains in cattle, pig and poultry rations.

If this market develops, Mr Green believes it would generate more interest in the crop, especially as wheat yields are not moving forward. Rye’s earlier harvest, before wheat, is attractive and compared with a second wheat it doesn’t suffer take-all, making it a feasible option.

“But if it was brought to market we would need a selection of varieties rather than the ones we have for AD.
“Grain yields would have to be better and certainly around the 7t/ha mark because on light soils wheat is still doing 7-8t/ha and the crop would also be competing with the hybrid feed barley and the malting barley market with its high premiums.”

Breeding work being carried out by KWS in eastern and northern Europe could deliver those much needed higher-yielding varieties. The best new hybrid rye is accelerating yields by about 2% annually, says the firm’s Bill Lankford.

In the past two seasons rye has consistently outyielded wheat in UK trials where the best wheats and hybrid ryes are grown alongside each other.

“As a second cereal in the Yorks Wolds and Dorset, we have seen it outcompete our best wheat by 1.5t/ha and in a first cereal situation at Cambridge, hybrid rye has done 12.2t/ha in trials.”

KWS hopes the UK could replicate the success achieved in Denmark, where hybrid rye has really taken off (see “Danish development below).

KWS agronomist Jacob Nymand, based in Vejle, says hybrid rye is set to become the main grain source for cattle and pigs in Denmark.

“Furthermore, with advances being seen from new material every year, I’d expect the yield gap between other cereals and hybrid rye to be about 33% by 2018.

“This generated great interest in rye in Denmark, which was only tempered after a wet year created issues with ergot in feed rations.

“Now we have managed to minimise these risks, through introducing Pollen Plus technology, which is a combination of genes that have been bred into the newest KWS hybrids that boost pollen supply to ensure successful pollination during the flowering period, and the animal feed market is taking off.”

He point out that pigs number 25m – five times more than the current population of Denmark – and rye has great feed potential at low costs of production.

While rye has a lower feeding value than wheat (4-5% less MJ/t of grain) and a 1-2% lower protein content than wheat, its higher yield generates more feed value/ha on light soils and on heavy soils it is on a par with wheat.

With no historic feed price for rye in Denmark, the industry set an equilibrium price for the crop based on its ability to finish pigs at the same rate as wheat based on 40% rye in the diet.

Assuming wheat at £133/t, and taking into account rye’s slightly lower feed value, the equivalent price for rye is about £120/t.

However with light land rye costing about £46/t less to grow than wheat, farmers quickly realised the potential and the feed industry also took note.

As a result, about 150,000ha of rye is now grown for both human and animal feed purposes in Denmark and the area is expected to grow to 250,000ha by 2050 – largely at the expense of second wheats.

The compounding industry has made the switch to more rye, and winter barley and triticale are now rarely used in the feed market in Denmark; the triticale area, has, for example, dropped from 20,000ha to just 5,000ha.

Keep on top of growth regulation with hybrid rye crop

Hybrid rye has proved its worth for Velcourt farm manager Simon Eddell, who has been growing second and continuous milling rye on the Rougham Estate in Suffolk for a number of years.

He attributes the success of the crop to the inherent drought resistance and ability to scavenge nutrients from the soil.

The variety Phönix consistently achieves more than 8t/ha on the sandy soils that would barely yield 6t/ha of wheat in comparison, he says.

Furthermore the gross margin is similar to first wheat. “But we would never achieve that with wheat on light land.”

The best yields come from early October plantings, but if the weather isn’t suitable, the flexibility on lighter land still allows drilling to be delayed into November. The crop is never rolled as rye is extremely sensitive to compaction.

Inputs are lower than other cereals, most notably the nitrogen requirement at just 150kg N/ha. The milling crop still receives three fungicides for mildew and rust, including one on the ear, while herbicides costs are low due to the early vigour and competitive nature of the crop.

The weed spectrum on the lighter land does not include blackgrass, so a pre-emergence followed up with a spring sulfonylurea does the job, he says.

“The biggest issue with rye is its height. It can grow up to almost 6ft, and can grow twice its height again after flag leaf emergence.”

Keeping on top of growth regulation is very important and timing is key as the gap between GS30-33 can be as little as seven days, he says.

Sequential applications of chlorocholine chloride/Moddus (trinexapac) and a later Terpal (ethephan + mepiquat) keep the height manageable, but those growers who run adrift with their growth regulator programme have problems combining the crop. “We are looking at a new growth regulator in trials this year on rye.”

While ergot continues to be an issue, especially last season on open-pollinating type varieties, breeders are beginning to address it, he adds.