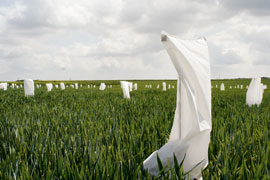 The seed costs a small fortune to produce and buy, there probably won’t be a yield advantage on high yield potential sites, and the previous incarnations were hardly a resounding success.

But that hasn’t stopped Saaten Union from continuing to develop hybrid wheat varieties, with the first of the second generation for the UK, Hystar, commercially available next season through a number of seed merchants co-ordinated by East Anglian-based merchant CropCo.

Placing the variety in the right situation is critical to getting the extra performance needed to justify the increased seed cost, John Poulton of CropCo stresses.

Typically that means lower fertility situations, such as light land, land prone to drought, second or even third wheats. “We want to talk to forward-thinking farmers and identify where they find it most challenging to grow wheat, and use Hystar on these fields to raise their overall farm average.”

The reason why hybrid wheats perform better than standard varieties in those situations is they have greater tolerance to stress and give more vigorous growth, says Guillaume de Castelbajac, the managing director of Saaten Union‘s hybrid wheat operation in France.


Trials observations in France have shown a 46% increase in shoot biomass and 60% increase in root biomass at tillering compared with the hybrid’s parents, which can lead to a 60% reduction in seed rate and a lower need for nitrogen earlier in the season. There is also a longer and faster grain filling period, helped by delaying nitrogen applications, he says.

In French trials, Hystar, an early maturing variety similar to Cordiale, has given 0.8-0.9t/ha higher yields than the market standard variety in that slot.

“Unlike previous hybrids in the UK, Hystar is a high-flier. It’s a soft feed variety, with good resistance to most diseases, including both rusts,” says Mr Poulton.

Mildew and eyespot are the most significant weaknesses.

There is less UK data, although trials in a second wheat situation showed a 0.4t/ha yield advantage over Oakley. In 11 first-wheat trials, yield were similar to Oakley, but those trials tend to be carried out on good yield potential sites, which is not where Hystar is being targeted. That is also the reason why the variety is not being put through the Recommended List process, says Mr Poulton.

Much more data should be available after this year’s harvest, he adds. Together with a network of seed merchants around the country, 108 farmers have sown the variety to test and compare against their standards, together with the variety being placed in a number of trials.

As in hybrid oilseed rape seed production, “mother” and “father” lines are planted in strips, typically 6m wide. But, in contrast to oilseed rape, where the female line is genetically sterile, a chemical growth regulator, Croisor (sintofen) is used to sterilise the mother line so only pollen from the male variety can fertilise the female.

Timing has to be spot on, explains Daniel Hemar, a Saaten Union technician in charge of determining when the sprays should be applied. “We’re looking for the developing ear to be 15-20mm long in the sheath. Usually that is in late April or early May.”

The chemical is applied using a sprayer mounted with protective skirts around the boom to prevent drift onto the male line. Rate is determined by experimentation during the development stage, but typically it is 13-15 litres/ha in 300 litres/ha water.

“The chemical doesn’t penetrate well, and has poor systemic activity, so we add two adjuvants to improve that, and use a high water volume,” Mr Hemar says.

At least 95% of the seed in the field has to be the hybrid to guarantee it meets the 90% EU rules standard. “If it is less than 95%, then the field is rejected,” says Volker Lein, Saaten Union’s research director.

Mr de Castelbajac says that between 10-35% of fields are rejected each season for various reasons.

Seed producers are paid the equivalent of 11t/ha of commercial wheat, yet produce just 1.6t/ha of hybrid wheat seed. That compare with around 8t/ha for a typical conventional seed crop. “The high cost of production and the risk involved is why the seed costs are so high,” he adds.