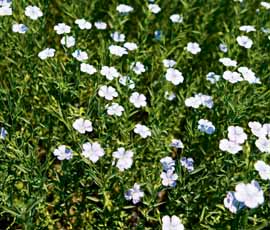 “It’s a legacy of the GM contamination issue,” he says. “A couple of years ago, when exports into the EU were stopped, the crushers had to scratch around for supplies of linseed. They had to pay up, or risk being left short.”

This meant that the domestic market in Kazakhstan became less attractive than the export one, he continues. “Investment in the country’s infrastructure came at the right time. They were able to send their linseed across to Western Europe, where it was very competitive.”

Whether this will continue into 2012 remains to be seen, he adds. “There are some end users who only want West European supplies and they are prepared to pay for them. Otherwise, the supply from the east has been very acceptable to the crushers.”

Mr Probert explains that the UK crop has always traditionally filled the two-month gap after harvest before Canadian supplies are available. “September and October were the opportunity. But now that the crushers are more reluctant to issue contracts, crop movement will have to be more structured.”

That means some growers will have to move their crop into store, he advises. “It’s accepted with the winter linseed crop, but as spring linseed is the last to be harvested, it tends to have to be moved off the farm. There’s no doubt that movement will become more of an issue.”

Some 36,000ha of spring linseed were grown in the UK last year, reports Mr Probert. “We’re not anticipating much change in 2012. Although fixed price contracts are difficult to come by, around 80% of the crop will be contracted.”

The most innovative contracts come from Valorex, which uses linseed in animal feeds for its ability to improve omega-3 content. The price is linked to oilseed rape and is made up of an average of three components – a £30/t premium over oilseed rape, a £350/t fixed price and an open market value.

“They do specify variety, with the main one being Valoal. We are constantly screening varieties for omega-3 content and will be looking at some very high content varieties in the coming year.”

So don’t expect to see linseed contracts at last year’s dizzy heights of over £400/t, he adds. “The values will still be good, but like all crops, they’ve come back a bit.”

That view is echoed by John Thorpe of Openfield, who says that prices are currently around £345/t ex-farm for November movement.

“There has been an understandable move away from spring break crops due to the high winter oilseed rape prices and unpredictable spring weather patterns,” he notes.

However, linseed yielded well in 2011 and has gained a following for its help in removing blackgrass in the rotation. “The prices available now mean that linseed is on a par with spring oilseed rape in gross margin terms. And there are contracts out there.”

Richard Elsdon of United Oilseeds believes that linseed is one of the better break crops and urges growers to make space for it.

“Whether it is chosen as a second break crop, to reduce the frequency of oilseed rape in the rotation, or to help with the threat of herbicide resistance, linseed also has good earning potential in its own right.

“Remember, too, that it can be drilled and harvested with the same equipment as oilseed rape. It can also be sown in the spring, after blackgrass has been sprayed off.”

Once spring linseed is in the ground, there’s a range of herbicides that can be used for both grass and broad-leaved weeds, he advises.

“What’s most important is that a final application of glyphosate is made in early to mid-August. It hastens and evens up ripening and removes any remaining weeds.”

The top selling variety is Abacus, reports Jeremy Taylor of Senova “It has the combination of high yields and early maturity. With 26% of the market last year, it remains popular with growers, who value the ability to get the crop harvested in time.”


See the Digital edition of Crops for a free, interactive spring cropping margins calculator. Type in your own prices and costs, or use the default figures from John Nix, and see how the different crop options compare for your business. Also check out the predicted prospects of each crop in 2012.