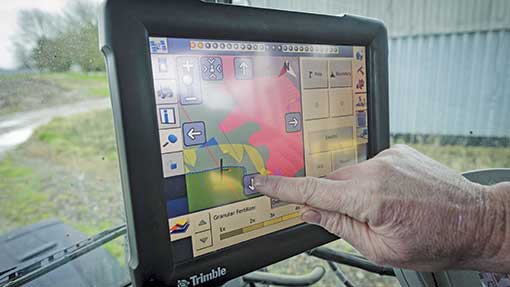 In the final article of our In your hands series, Crops, in association with BASF, shows why the biggest job on earth is in farmers’ hands. This month, Caroline Stocks examines how innovation and new technology will help feed a growing world population.

Even just a decade ago, few arable producers would have predicted the tools they would be regularly using on farms today.

Robots, drones, driverless tractors and biopesticides sound like the stuff of science fiction movies rather than modern agriculture.

Precision farming, ‘big data’ and the use of equipment to target inputs are all commonplace on farms today. Already farmers are actively using tools such as drones, automated systems and an array of sensors to support their agronomy, and certainly all of these innovations will continue to evolve as research and development (R&D) advances.

The data generated from these technologies is valuable, but, fundamental to it delivering tangible business benefits are the decisions a farmer then makes – linked, for example, to field knowledge, rotation, crop yield and quality targets. Simply generating data alone can cause more frustration rather than provide a solution.

As BASF continues to innovate, moving from an era primarily focused on crop protection products into one of ‘ag solutions’, we are actively investing in future technologies such as compounds that will refine and modify available soil nutrients, or products that enhance a plant’s ability to self-defend against climatic stress or attack from a pest or disease. We also see a valuable role in the future for biological crop care used alongside conventional chemistry in both protected and field crops.

It is this drive for innovation that has resulted in an increase in BASF’s investment into agricultural R&D from €470m in 2013 to in excess of €500m for 2014. This investment of about 10% of our sales revenues into farming demonstrates our commitment to the sector and its importance to the BASF business.

Our European teams are also working with farmers and industry partners such as John Deere to develop exciting innovations for the future. It is vital that we develop these alongside equipment advances such as the near-to-market direct injection systems. It is also crucial that we – like farmers themselves – maintain the focus on farm solutions first, not just generating clever chemistry or ‘big data’ in isolation.

Technological innovations have contributed significantly to how farms have been operating during the past few years, helping producers boost their efficiency by targeting and reducing inputs.

And while technology has changed the shape of food production, the biggest technological developments are still to come, predicts David Gardner, chief executive of the Royal Agricultural Society of England (RASE).

“We are doing things now that 20 years ago we could never have imagined,” he says. “There is so much technology still to come that in 50 years’ time, farms will look very different from now.”

To date, the biggest technological advances in the arable sector have concerned precision farming technology, including GPS soil mapping, spraying and planting.

A growing world population, set to reach nine billion by 2050, has required farmers to use data to tailor production more specifically to their land, a kind of management that is only going to become more important, Mr Gardner says.

“Where we are moving towards next is precision land management,” he says. “The successful farmers of the future will be the ones who can measure things that are variable on their land and manage them accordingly. It will mean different things are right for each cropping system.”

See also: In your hands: Growers must focus on food quality

The key to this will be an increasing number of sensors that can measure precise information at all levels of the farm, Mr Gardner predicts.

“In time we will have real-time sensors that will measure what’s going on in plants, enabling farmers to take action right away and become increasingly precise. It may sound far-fetched now, but as scientific and engineering capabilities develop, agriculture will be able to find a use for the technology.”

For David Chandler, a researcher in biological pest control at the Warwick Crop Centre, it is combining these developing technologies that will really enable farmers to produce more food in a sustainable way.

“The Sustainable Use Directive (SUD) has been a real game-changer and set the direction of policy for the next 20 years,” he says. “It says farmers and growers must use integrated pest management processes instead of chemical pesticides.

“It is also generally accepted that it’s difficult to develop new chemical pesticides because of increasing legislative requirement, which is why there is so much movement in the biopesticides industry.”

Developed as an alternative to chemical pesticides when evolutionary resistance began to emerge in pests, biopesticides make use of micro-organisms such as fungi and botanics to manage pests.

While they do not give the same levels of effectiveness as chemical pesticides, Dr Chandler says they could be used to complement them.

“Historically, biopesticides were used in horticultural greenhouses where the environment was controlled and the crops were more protected,” he says. “The challenge now is to overcome ecological complexities and issues of scale when you move out to arable crops in the field.

“We need to understand what temperatures, levels of humidity and conditions they will work in, so we can look for new strains. This was done with pathogenic nematodes, and now we have low-temperature nematodes.

“As with any technology, there are no silver bullets,” he adds. “It’s about finding how best to use these innovations in a cost-effective way. Regardless of the technology, it’s critical farmers are given the tools they need and the proper training to get things right.”

Knowing how to make use of agricultural technology and the data much of it produces is key to the success of any innovations in the industry, says precision farming consultant Ian Beecher-Jones.

Innovations such as driverless tractors and robots to carry out phased harvesting, seeding depth to moisture, permanent planting positions and crop scouting could reduce the need for workers in the field.

But rather than reducing the need for traditional farming skills, technological developments will be more important than ever.

“People will need to be able to sift through all the information to make decisions in the field,” he says. “The computer may say ‘yes’, but the weather says ‘no’, so you need to be able to know what the right course of action is.”

Investing in smart technology has been vital for reducing input costs and maximising the production capabilities of Cambridgeshire grower James Peck’s business.

Travelling around the world as part of a Nuffield farming scholarship in 2010 made Mr Peck realise the importance of investing in technology.

On his return to the UK he implemented 12m controlled-traffic farming across all the land he farms and installed Trimble technology with RTK on all farm equipment.

“We have been using the technology for three years and have mapped all our land, which has enabled us to be more precise, but also to minimise reliance on resources such as phosphate and potash,” he says.

“We are able to measure the land in terms of its make-up and how we should be farming it to reduce inputs and increase outputs where possible.”

In 2011, Mr Peck also installed five ground-mounted tracking photovoltaic units on the family farm, which follow the sun as it moves across the sky.

The 98kW panels, which were the first of their kind to be installed in the UK, provide renewable energy for drying grain in the farm’s grain stores.

“Adopting new technologies is a significant investment, but as a modern farming business we couldn’t afford not to do it,” he says. “The technology has helped us reduce our reliance on fossil fuels, cut costs and reduce our effect on the environment.”

Using the latest technology has enabled the business to streamline its farming practices, allowing it to act sustainably without compromising profits, he adds.

“We have seen significant improvements in crop output, soil compaction and energy use since we started controlled traffic farming, while GPS has enabled us to improve the precision of our inputs. We are starting to map organic matter to see if our practices are helping to increase it.”

In the future, Mr Peck says farming technology will enable harvesting operations to work more seamlessly. “I want to see turning on headlands become fully automated,” he adds. “They can account for up to 25% of the field, so it’s important to get their management right.

“Whether it’s a combine or a drill, I want the machines to follow the same tracks while turning to ensure there is no unnecessary compaction or that sprayers do not overlap.” 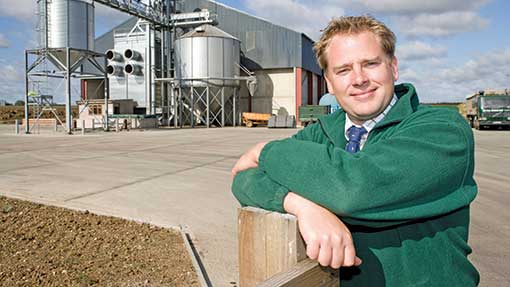