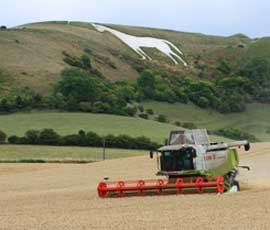 Martin Smart has just finished cutting the last of the winter wheat at Ashton Farms, Trowbridge, Wiltshire, and is about to move into the final 20ha of spring rape.

“We’ve got two combines in 80ha of spring beans today (11 September), so there’s a light at the end of the tunnel,” he said.

Spring beans had done very well, yielding 4.3-5t/ha on good ground, while spring barley had ranged from 6.t/ha on thin soil to 8.6t/ha on better land.

“It’s produced a nice sample and there was an awful lot of straw,” said Mr Smart. “But we did a trial applying 150kg/ha of nitrogen compared to 200kg/ha – and saw no difference in yields whatsoever; clearly 150kg is the plateau.”

Wheat yields had been variable, with crops drilled in November and December proving a total waste of time, he added.

“They just had no roots, so the hot spell in the early summer caused some real damage.” Milling wheat, sown into better conditions, was far more pleasing.

But oilseed rape proved similarly variable. “Some of it was disastrous and made me think we should have ripped up more than we did,” said Mr Smart.

“The better stuff on heavy ground managed 4.3t/ha – and we’d normally expect to get 5t/ha off that.

“But we’re lucky really, although we had everything against us from the word go, there are many other farmers in worse positions,” he added.

“And we’ve got our oilseed rape variety trials sown into super conditions, so that’s good news.”