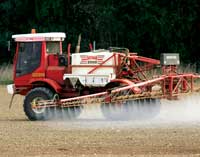 The timing of IPU application usually coincided with barley yellow dwarf virus (BYDV) treatments, offering growers a one-hit solution to annual meadowgrass and aphid control. It also had the benefit of delaying spraying operations until drilling was completed.

Without IPU, growers are faced with several alternatives. One option is to go down the pre-emergence route but, as this requires a major change to autumn operations, it is unlikely to win favour among most farmers, says UAP’s Chris Bean.

“If growers don’t have a significant blackgrass problem, they are very unlikely to move to a pre-emergence strategy for annual meadowgrass control.”

There are still good post-emergence treatments available, he says.

“A switch to chlorotoluron (CTU) is much more likely as it can be used as a post-emergence product and is still effective if left to coincide with BYDV treatments. CTU can almost be used as a straight replacement for IPU and is effective against meadowgrass until tillering – it also has excellent activity against wild oats.”

But growers do need to check varieties are CTU-compatible, he warns. “It is safe to use CTU on most varieties, but it shouldn’t be applied to Cordiale, Duxford, Humber, JB Diego or Grafton – there are also a few others to be avoided, so it pays to check compatibility carefully.”

Pendimethalin at about 800g/ha of active ingredient or diflufenican at up to 100g, used in a mix with CTU, gives sustained annual meadowgrass and broadleaved weed control, he says. Crystal (pendimethalin + flufenacet) or Liberator (flufenacet + diflufenican) also give good results and can be used at reduced rates with CTU.

Using Othello (mesosulfuron + iodosulfuron + diflufenican) earlier at the two to three leaf stage, rather than the usual “fire-fighting” tool later in the season, will also give good control of meadowgrass and broadleaved weeds, he says. “It can be used at lower rates with the same residual partners as CTU to broaden the weed spectrum, add residual activity and reduce the risk of resistance. Prices will be more comparable to CTU mixes at around £28/ha.”

Use of an insecticidal seed treatment such as Deter (clothianidin) could also end the need for a BYDV spray, he says. “I am hoping most of my customers have used Deter seed dressing, so it will be unlikely they will need to make an early application for BYDV. However, the situation will need monitoring as in open autumns/winters repeated fly-ins can occur.”

Peter Riley of Prime Agriculture agrees that post-emergence CTU is one option, but would prefer to see a shift toward pre-emergence spraying. This strategy keeps growers options open and takes the pressure off CTU and Othello. “It is good stewardship as there are more products to choose from, which can be rotated to avoid over-use and resistance issues.”

For some growers, it may mean stopping the drill to catch up with spraying, but it is the right way to go, he says. “It may even be worth considering using a contractor to take on the extra workload.”

A number of herbicides can be used, says Mr Riley. “Flufenacet, prosulfocarb and, on tolerant varieties, chlorotoluron are good pre-emergence actives for annual meadowgrass and can be combined with diflufenican and pendimethalin to give good poppy and mayweed control.”

If the workload does preclude pre-em work, then very early post-emergence applications can work well. But the later they are left, the less effective they will be, he warns. “Chlorotoluron can be left a little later than flufenacet and prosulfocarb, but is not effective on tillering meadowgrass.”

Using Deter seed dressing should solve the BYDV dilemma, he adds. “In most cases growers will not need to go back.”

If pre-emergence or early post-emergence really isn’t an option, growers can consider using Othello, says Mr Riley. “Othello gives the most effective annual meadowgrass control later in the season and is really the only option once meadowgrass has tillered.” But this shouldn’t be relied on as overuse can lead to resistance, he warns.

TAG’s Jim Orson agrees. “Othello is a sulfonylurea which we rely on for broadleaved weed control – if over-used, resistance can build and we are already seeing some cases of resistance in chickweed and poppies.”

Over 90% control can be achieved using other options mentioned above, says Mr Orson. But he expects growers will favour post-emergence treatments for now.

“It will be easier, but I would like to see a range of products used.”