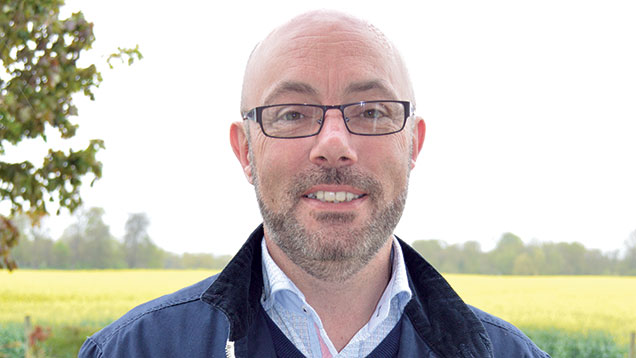 Irish wheat yields are on average the highest in the world, driven by higher rainfall, mild winters and long cool summer days that help grain filling.

Yields over a 10-year period are nearly 10% higher than the UK and well above those of New Zealand, which boasts the world wheat yield record.

However, the euphoria of high yields is tempered by high disease-control costs and narrow windows for drilling and harvesting in a wet climate.

“Climatically, there is a 10% advantage over most the UK ,with the actual yield advantage around 1t/ha,” he tells Farmers Weekly.

The country gains from having good rainfall, a lack of extreme weather with no cold winters or hot summers and long cool summer days.

Figures from the Food and Agriculture Organisation put Irish average wheat yields at 8.7t/ha over 2003-12 compared with 7.7t/ha for the UK.

Work by UK crop science group Adas suggests south-east Ireland could produce the highest potential yield in the whole of the British Isles, at 22.8t/ha with water not a limiting factor.

The area of Irish cereals is about 300,000ha or less than 10% of the UK area, largely in south-east Ireland in a Dundalk-Rosslare-Cork triangle, but could easily increase. Ireland grew 1m ha of cereals in 1850, Mr Spink says.

However, he admits such an increase is unlikely due to the current big push into milk production, with the end of EU quotas earlier this year and as wheat growing costs rise.

The winter wheat area dipped to about 70,000ha as growers in the wetter areas around Cork gave up, and for the first time the area of winter barley overtook wheat to about 80,000ha.

“Over the past five years we have seen winter barley yields rise as the cost of production is less than for wheat,” says Mr Spink, who is based at Teagasc’s Oak Park crop production centre at Carlow, 40 miles south-west of Dublin.

Septoria in wheat can easily slash yields by 50%, while fusarium can also be a problem in a wet summer, with relatively little rust or mildew seen.

One major problem is the lack of viable break crops in Ireland, with the potato area in slow decline and the end of sugar beet growing nearly 10 years ago.