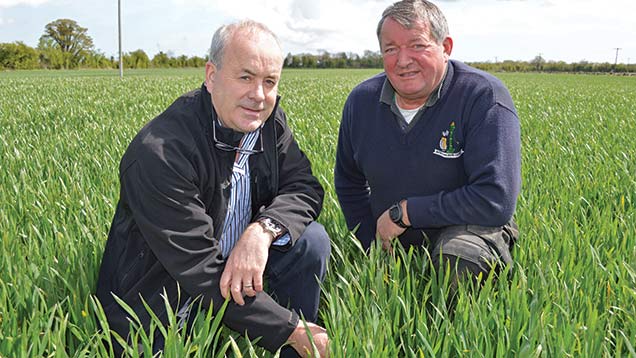 In the heart of Ireland’s best wheat country, Mr Hoste’s fertile land has not seen a plough for 20 years, resulting in high organic matter soils and a yield a shade under 14t/ha.

Good summer sunshine is often a yield-limiting factor for wheat growing in Ireland, but the dry and sunny June and July of 2014 helped grain filling and kept late disease at bay.

Mr Hoste is convinced his Horsch drill, which spreads seed in bands, is key in giving even plant tillering and makes the best use of the land area.

“The more we can spread seeds across the field the better, so a crop looks like a grass field rather than seeing drilled lines,” he tells Farmers Weekly.

His record harvest in 2014 was his third crop after long-term pasture and won him the silver award in the Yield Enhancement Network (Yen) competition organised by crop scientist Adas, and a yield only bettered by the UK record-breaking crop from Lincolnshire’s Tim Lamyman.

Mr Hoste’s Belgree Farm, near Ashbourne, is four miles north-west of Dublin in some of Ireland’s richest arable land, which also grows most of the nation’s potatoes.

His farm in County Meath is within sight of Dublin airport and stretches to 200ha of medium loam soils of which 160ha are in arable cropping, consisting of winter wheat, and spring barley, oats and beans.

He grows the feed wheat variety Dunmore, which was selected for Irish conditions and gives a big flag leaf for light interception, but is becoming  susceptible to Irish wheat growers’ biggest fear, the wet weather-loving disease septoria.

Drilling of his 100ha of winter wheat usually starts about 20 September with the aim of finishing by the end of the month and before the generally wetter October.

Spring nitrogen is a relatively modest three-way split of 130kg/ha due to the high use of farmyard manure, and Mr Hoste is not tempted to go above 160kg/ha because of lodging fears.

A mild winter followed by a warm wet early spring were ideal conditions for septoria, but a four-spray fungicide programme kept disease under control.

Seamus Shevlin, an independent agronomist, puts this down to getting fungicide timings spot on and the change to drier weather from last May.

“We get a lot of disease in crops with a wet June, but luckily we had a very dry June and July that year. With heavy septoria pressure a full well-timed fungicide strategy is essential,” he says.

“We are seeing two SDHIs as normal for growing wheat in Ireland because of the high disease pressure,” he says.

Harvested in late August, the field Mr Hoste put into the Yen competition hit a yield of 13.92t/ha, while average yields across the farm were 11.25/ha with a specific weight of 78kg/hl.

This season, Mr Hoste is trying out the variety Revelation as he looks for disease resistance and good standing power when choosing a new wheat.