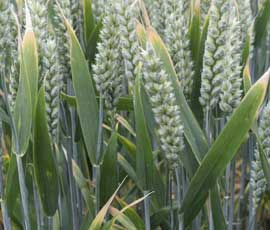 Part of that was due to triazole fungicide performance slipping, with the build up of more resistant septoria strains in the country, he said. “We’ve started to see more evidence that these strains are impacting on the field performance on the more important triazole products.”

That included trials, where three weeks after treatment, the triazole-treated plots looked “shaky”, he said. “They were losing a lot of canopy, carrying a lot of disease.”

Disease control assessments suggested on average, triazole-treated plots in 15 trials in Eastern Ireland, carried around 20-30% septoria on leaves two and three around six weeks after treatment, compared with just 10% where treated with an SDHI fungicide plus triazole.

That translated on average into around 10%, or 1t/ha on 10t/ha crops, extra yield for the SDHI-treated plots, which was double the yield response difference seen in previous years, he said.

“In simple terms, we’ve seen a fall off in triazole efficacy across most of our trials, and then a big differential in yield response from SDHI fungicides resulting from the better efficacy.”

Trials last season also pointed towards SDHI fungicides being used at the T1 (GS32) timing as well as flag leaf treatments, he said. “The early season timings really seemed to suit SDHIs, particularly where the triazoles came under efficacy pressure.”

In two spray programmes, in many cases, there was little to choose between the new SDHI products, he added. “You can show dramatic differences between the products, but it tends to be in very artificial circumstances.”

Dose was also a key factor for persistence, he pointed out. “If you use high rates you could get excellent persistence. If you start cutting doses your persistence will only be good.”

• The first data emerged for a fourth SDHI fungicide, which could be approved in time for the 2013 season, at the AICC conference.

• Coded LEM, DuPont’s penthiopyrad had been tested as a straight, and in formulation with chlorothalonil or cyproconazole, Dr McCabe said.

• “It has worked well in our conditions. It is interesting as there is a chlorothalonil mix, and also because we’ve looked at mixing with a lot of different triazoles.”

• Across two varieties, Oakley and Einstein, yields were comparable to slightly ahead of Seguris, and slightly below Aviator Xpro, in the trials presented.

• In ADAS trials, adding LEM to a half dose of epoxiconazole had significantly improved septoria curative and protective control over full doses of epoxiconazole alone, Jonathan Blake, the organisation’s plant pathologist, said.

• “Penthiopyrad does look an active molecule. Yield responses have been similar to what we’ve seen with the others in HGCA performance trials.”