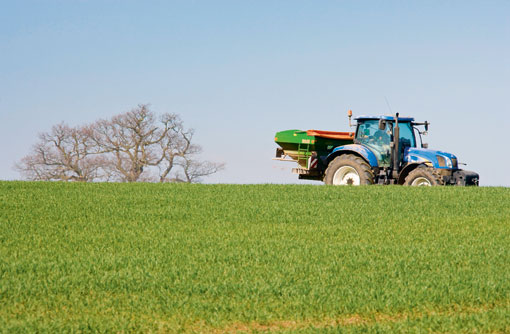 Magnesium is a key crop nutrient, but is it getting the attention it deserves? Robert Harris takes a look.

Most growers with potato and sugar beet in their rotations take magnesium pretty seriously as a crop nutrient, mainly because these two crop are the most responsive of those grown in the UK.

However, other crops, particularly oilseed rape, can respond strongly to applications of magnesium, suggesting many fields could be running short.

“Many people consider magnesium to be a trace element, which it fundamentally is not,” says Jerry McHoul, technical manager of fertiliser supplier K+S UK & Eire. “Foliar feeding is all very well, but there is a real need to raise levels in many soils to ensure crops are adequately supplied.”

It is vital for crop growth, being at the core of the chlorophyll molecule. It also plays a key role in protein synthesis, cell wall formation and several enzyme pathways.

The latest RB209 edition advises applying 50-100kg/ha of MgO to oilseed rape on both index 0 and 1 soils, says Mr McHoul. “The target index for combinable crops is 2. According to 2009-10 Professional Agricultural Analysis Group data, 26% of all arable soils were below that level, and almost half in East Anglia.

Many leading cereal growers are starting to look at magnesium in the same way, he adds. “They are not happy with the prospect of allowing soil levels to run down to index 0. They would rather apply a 25-50kg/ha annual maintenance dressing at index 1.”

Another issue is that levels of exchangeable magnesium have been falling gradually in many soils, especially chalk, Mr McHoul maintains. “A 10t crop of wheat will remove about 20kg/ha of MgO, and over 30kg if straw is removed. And a 4.4t crop of oilseed rape will remove more than 22kg/ha of MgO. Crop uptake values, however, will be higher.”

For both crops, he advises using ESTA Kieserit (magnesium sulphate), a fully soluble form of magnesium immediately available to the crop. It contains 25% MgO and 50% sulphur (SO3), so a 200kg/ha dressing will supply adequate rates of both nutrients for high-yielding oilseed rape, he notes.

Trials over the past four years on mostly index 1 soils show an average yield increase of 0.2t/ha on oilseed rape where a maintenance dressing was applied, says Mr McHoul.

“Magnesium often gets forgotten,” says Mr Langton. “It is hardly surprising that many cereal and oilseed crops show deficiency symptoms, particularly on calcareous and lighter soils, and also on soils with a high potassium index.”

Both calcium and potassium also compete with magnesium in the soil matrix, rendering it less available to crops, he explains. “We have to think not just what’s in the soil, but what’s available to the crop.”

However, cool and dry weather can affect uptake. When this coincides with peak crop demand, classic deficiency symptoms of yellow mottling between the leaf veins can occur even when soil levels are reasonable.

A top-up foliar feed will restore magnesium levels temporarily, says Mr Langton. “T2 and T3 are the key timings in cereals, especially after a prolonged dry spell when we will often recommend a preventative application.” He favours a humic acid formulated product such as Magnor at 1-1.5 litres/ha.

Peak demand for oilseed rape occurs at stem extension during February and March. Soils are still cold, reducing availability, and he recommends Zoom, which contains a mix of elements including Mg, at 2.5 litres/ha. He will add it to a phoma spray in the autumn to help root growth.

“However, while foliar applications can be useful as a short-term solution, they only apply hundreds of grams/ha. Getting soil indices to the correct level has to be the right starting point,” he stresses.

“Magnesium has traditionally been applied rotationally ahead of the most responsive crops, like sugar beet and potatoes, assuming any surplus is available for the rest of the rotation.

“This works well in slightly acidic, medium to heavy soils which hold surplus magnesium. However, it is even more prone to leaching than K, and antagonism can occur with calcium on chalk and limestone soils and high K soils. In these cases Mg needs to be applied in a soluble form, little and often.”

Rotational materials include magnesium carbonate (mag-lime or dolomite) and calcined magnesite (magnesium oxide or cal mag). The former, an agricultural lime, contains 10-20% MgO. “It should only be used where Mg is needed – long-term use can lead to very high indices which can limit K availability,” Mr Slater warns.

Calcined magnesite is about 80% MgO. It has low water solubility, although this improves on acidic soils and with finer material, he says.

“Magnesium recovery values can be as low as 10-20% after a year, but the rest should become available in subsequent seasons, ideal if you are at index 1. Apply every three to four years ahead of oilseed rape.”

For soils at index 0 or 1 kieserite, which is water soluble, is a good choice, especially on oilseed rape where the additional sulphur is useful, he notes.

Korn-Kali and Patentkali (6% and 10% MgO respectively) contain kieserite, but also potash, allowing three nutrients to be targeted in one application. “Again, these are ideal for rape and pulse crops.”

Masstock agronomist Alec Thomas is convinced that magnesium is the key to unlocking yield on chalk soils.

Mr Thomas, who advises growers across the Salisbury Plain, first picked up problems with magnesium deficiency five years ago in a crop of barley.

“Soil analysis confirmed an Mg content around 30ppm, or low index 1. Since that day we’ve been using soil-applied soluble magnesium every year across the farm and others in the region to build soil reserves.”

Mr Thomas now recommends 125kg/ha of kieserite for cereals on soils at index 1 to borderline 2, once ground will travel in the spring. This delivers around 30kg/ha of readily available MgO plus 63kg/ha of SO3. With rape’s higher sulphur demand, 200kg/ha of kieserite can be applied.

Wheat yields have risen by around 2t/ha on the farm where the problem was first indentified. “While new fungicide chemistry has helped, building soil Mg reserves up to borderline index 2 is the key,” he says.