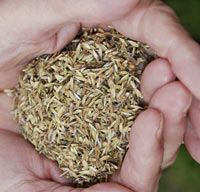 Growers will need to adopt a multi-pronged approach to keep ahead of herbicide-resistant blackgrass – starting from now.

Aim to get the most from pre-emergence herbicides and make good use of cultural control methods.

That’s the advice from two independent weed scientists as cereal growers consider their options for the forthcoming seasonal fight against blackgrass resistance.

Stephen Moss of Rothamsted Research, says both actions will help reduce the reliance on post-emergence herbicides, many of which are under threat.

“The armoury is declining,” he says. “Of those herbicides that remain, some are being found in groundwater and face an uncertain future, while others have already had resistance confirmed.”

Of the post-emergence options, Atlantis (iodosulfuron + mesosulfuron) still works well in most situations, he reports. “There have now been more than 250 cases of resistance to Atlantis confirmed across 21 counties. But most of these weren’t field failures and growers can still get good control.

“Where concerns exist, make sure you get seed tested. There are two different target-site resistance mutations, as well as enhanced metabolism resistance. You need to know what you’re dealing with – it’s hard to predict where resistance will develop.”

Pre-emergence herbicides have a lower resistance risk and have given more reliable results over time, notes Dr Moss.

“Their role is becoming increasingly important. Our trials show they protect 70% of the potential yield loss from blackgrass and will give between 60 and 70% control. That’s a far more consistent effect than that of post-emergence sprays.”

Cultural control methods can seem mediocre in comparison, he admits. “But using three or more such methods in combination can really help reduce blackgrass populations. So they shouldn’t be dismissed.”

Colleague Peter Lutman has just completed a review of cultural control of grassweeds for Syngenta. Although responses can be variable and most of the agronomic options have a cost, he highlights the value of ploughing and spring cropping.

“There’s a 67% reduction in the blackgrass population when you plough,” he reports. “Fresh seed is buried and blackgrass seeds don’t survive for very long once this has taken place.”

In stark contrast, direct drilling leads to a 33% increase in blackgrass. “Stubble cultivations don’t appear to have a major benefit either, giving a 20% reduction at best. But they do have a value for other weeds.”

Spring cropping can give an 80% reduction in blackgrass numbers. “It’s a very good method of reducing the weed burden and can really take the pressure off the system. It’s often equivalent to the control achieved with herbicides.”

Dr Lutman says drilling date can also make a difference to grassweed populations. “The review showed us that sowing in October doesn’t mean you get less blackgrass. To take advantage of a possible 30% reduction, you have to wait until November.”

The other advantage of later drilling is that the weeds tend to be less vigorous, so seed return is lower, he adds.

Seed rate and variety choice can both help with blackgrass control, but their contribution is lower than some of the other cultural methods, says Dr Lutman.

“The best variety reduces blackgrass numbers by 27%, while seed rates above 350 seeds/sq m can lead to a 40% decrease.

“Changing the crop density does reduce blackgrass, but very high seed rates present other challenges,” he advises. “The important thing is not reduce them too low – it opens up the field for blackgrass.”

Varieties which compete well with weeds are taller and create good ground cover. “Those with flatter leaves and which tiller well will be more competitive. Consort is a good example”

Having completed the review, Dr Lutman believes there are practical measures for growers to adopt in the battle against blackgrass, all of which will help to relieve the pressure on herbicides.

“Plough every 3-4 years, sow to establish 150-200 plants/sq m, don’t drill too early and try to include a spring crop in the rotation,” he recommends.

“Trials conducted over a couple of seasons have consistently shown this 10% benefit. At current prices, that equates to a £50 margin over input costs.”

Put another way, every £1 extra spent on herbicide gives an extra 1% weed control, he notes.

For autumn 2009, Syngenta’s lead recommendation will be a Defy/Liberator mix, with Defy at 4 litres/ha and Liberator at 0.4 litre/ha. The mix will cost about £50/ha, says Mr Williams.