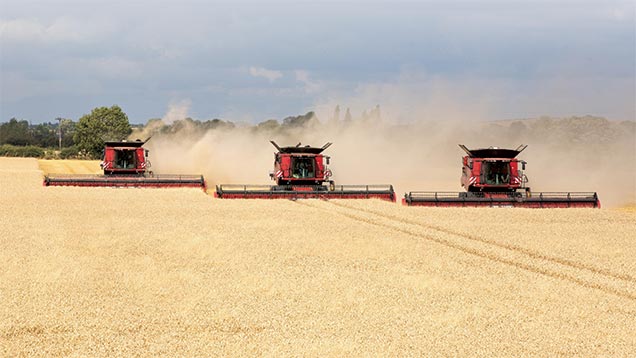 Cutting growing costs and boosting yields are foremost in most minds after the recent sharp fall in grain prices. We ask leading agronomists for their top tips on reducing wheat growing costs in 2015 without sacrificing yields.

There is scope to make savings of £10-20/ha on fungicide and herbicide programmes this coming season, believes agronomist Peter Cowlrick.

“Fungicides are potentially the key area. However, they’re also the best way of protecting margins. So it’s about fine-tuning, rather than drastic change,” he says.

Varietal resistance will be an important consideration when programmes are being finalised.

“The good news is that growers have changed their attitudes and there has been wider adoption of cleaner varieties. That gives us more options,” adds Mr Cowlrick.

He points out that the payback on some sprays was marginal last year. “The later spray timings, T3 and T4, showed very small responses. So this is an area where we could potentially cut back, while being mindful of previous crops and weather conditions.”

The wider adoption of azole-based seed treatments also gives some leeway. “It’s taken some of the pressure off the early sprays and eliminated the need for a pre-T0, especially where ‘rusty’ varieties have been dropped.

“It means that it may be possible to consider using more conventional T1 treatments, based on azole/strobilurin/chlorothalonil combinations, rather than SDHIs on varieties with good septoria resistance, such as Skyfall and Crusoe, particularly if they weren’t September sown,” he says.

However, regardless of variety, T2 timings should be using new SDHI chemistry across the board, Mr Cowrick adds.

A T1.5 spray is an additional cost and won’t be required if the interval between T1 and T2 is kept to 21 days, he notes. “It’s usually indicative that you’ve gone too early with the T1.”

In addition, Mr Cowlrick highlights that in the event of a dry February and March, responses to fungicides will be lower.

“But don’t underestimate the need to match fungicide programmes to variety and disease pressure – an eradicant approach is no longer appropriate,” he says.

As far as herbicides are concerned, he warns growers to think long and hard about ‘recreational’ spraying of blackgrass product Atlantis next spring.

“With difficult populations post GS13 of the weed, it may only knock out 5-10% of the blackgrass and could make the situation worse long term,” he says.

Delayed drilling has been used more widely this year and autumn herbicide programmes have worked well, he reports.

“It was very dry in September, so we held off with the pre-emergence herbicides until conditions were right. They’ve done well, both on grass and broad-leaved weeds, so we will hopefully have less of a job to do with a spring tidy-up,” he adds.

Reductions in nitrogen fertiliser use are more difficult to foresee, except where manures are being used.

“Much depends on the market and levels of soil nitrogen next spring – it would be a shame to miss any premiums, as they’ve been worth having. High-yielding millers such as Skyfall will need plenty of nitrogen,” he adds.

Mr Cowlrick sums up by coming back to fungicides. “Where growers spent £130-140/ha in 2014, it’s possible that up to £20/ha could be better spent by sticking to a carefully timed programme.”

Cereal growers spending £150/ha on fungicides and the same amount on grassweed herbicides will be looking for ways to bring that level of expenditure on agrochemicals down, accepts Stuart Alkin, agronomy manager at distributor Zantra.

“Of course, another approach is to get better value from the investment being made,” he adds.

By far the biggest saving that many have made is not autumn cropping their worst blackgrass fields.

“Spring cropping is a partial solution, but there’s also an opportunity to do something more radical, such as introducing three-to-four-year grass breaks,” he says.

Otherwise, the targeting of inputs on a field-by-field basis, rather than by a blanket approach, should be standard practice in 2015 and could help avoid any unnecessary expense.

“It’s really important to meet yield and quality targets at lower grain prices, especially where milling wheat is being grown. And that will depend on the variety in the ground, as well as the site and the conditions,” he says.

Varieties such as Skyfall have good disease resistance, although things may change as bigger areas are grown.

“With all quality wheats, attention must be paid to late ear diseases and the need to produce protein. Skyfall is different to existing varieties in the amount of nitrogen per protein point needed to achieve the quality parameters,” Mr Alkin says.

Any fungicide savings will come from better targeting, with spray timing far more important than product choice in getting good disease control.

“Treatments must be timed to leaf emergence, so that the leaf layers are protected. Growers could save themselves a great deal of expense, and produce higher yields and better grain quality, if they stuck to schedule and got fungicides on at the right time,” he says.

Mr Alkin adds that 2013-14 was an exceptional year, with high rust risk varieties and a mild autumn, leading to one if not two pre-T0 sprays.

Even so, the days of a two-spray programme for disease control are long gone.

“We compared £90/ha and £130/ha programmes in trials last year on a range of varieties. Spending £90/ha is simply not enough on most varieties,” he says.

That’s because disease pressures are different today and azole performance has waned.

“It’s no longer possible to eradicate septoria with the armoury at our disposal. So you have to consider the septoria risk at the outset and set your spray programme accordingly,” Mr Alkin adds.

Variety choice can make a significant difference, at least in the short term.

“It allows you to look at alternative approaches on certain varieties and potentially spend a bit less. We’ve seen more resistant types being introduced, especially in the milling wheat category, which give us some scope.

“Choices are now set and it’s been a wet, mild autumn so far, with infection already establishing in crops,” he says.

Most varieties will still give a payback on a four-spray programme, but knowing at the outset which timings will be the most important is a difficult call.

“That was clear when in 2014, T3s appeared to have been more important than T0s, which is the opposite to the past three years,” he adds.

Decisions need addressing on a variety-by-variety and site-by-site basis. “We need to be light on our feet and ready to adapt as conditions alter,” he says.

A good example of this is including a very low dose of strobilurin at T2 for rust control in appropriate varieties. “For very little cost, there’s a huge benefit,” Mr Alkin adds.

Savings may be made where decisions have been implemented rotationally, to deal with weed or disease issues, but crops already in the ground are dependent on what the winter brings, warns Stuart Hill of distributors Frontier.

“There’s no doubt that it will be a significant challenge to cut costs, especially with the new aggressive yellow rust race and less sensitive septoria populations,” he says.

Yield is still king, and pushing yield will help to dilute input costs. “Trimming costs by cutting back on fungicides could lose you 10-20% of yield,” he says.

His view is that the majority of wheat varieties should receive SDHIs, azole and protectant mixes at T1 and T2, with only less responsive varieties warranting a different approach.

“There is a difference in varieties, but there has been an increase in more resistant choices such as Revelation, Crusoe and Relay. Opportunities will be based on a site- and season-specific approach,” he says.

Frontier trials conducted in 2014 have shown a huge benefit of using an SDHI at T1. “For an extra £15/ha over the cost of a azole plus chlorothalonil, there was an average 1.6t/ha yield boost. That was equivalent to £172/ha,” he says.

Protectant chemistry is essential and the value of chlorothalonil in programmes at T0, T1 and possibly T2 is clear cut. “Septoria is a different animal now and there are step changes in yield from the right fungicide programmes,” Mr Hill adds.

Better resistance ratings for yellow rust are available in current varieties. “That’s good, but we have seen the more aggressive Warrior race of yellow rust develop very quickly. It would be a mistake to relax your guard,” he says.

Mr Hill suggests that grain marketing strategies will be as important to the bottom line.

“Locking some tonnage into the right price should be given detailed attention. It offers growers a better way of coping with fluctuations than reducing inputs does, which can be a false economy,” he says.

Some of the decisions that have already been made this year will allow a reduction in input costs, highlights Bill Barr of agronomy group Prime Agriculture.

“Fields with a high grassweed burden have been switched into spring barley, more quality wheats are being grown for the better premiums on offer, and disease susceptible varieties have been replaced,” he adds.

As a result, Solstice, Robigus and Oakley have largely disappeared, with the likes of Skyfall, Crusoe, Zulu and Evolution taking their place.

Where drilling was delayed, seed treatment use has changed. “We’ve been able to move away from the more costly Deter treatments and take-all products such as Latitude, as the pest and disease risk is reduced,” he says.

Likewise, he doesn’t anticipate needing a pre-T0 spray, due to variety changes, and will stick to a four-spray fungicide programme.

“We know that we have to keep spray timings tight. The unknown at this stage is what sort of winter we’re going to get,” he says

Mr Barr plans to give his growers some options with fungicides. “There are often four ways of achieving the same end result, so I’ll work out the cheapest way of doing it. Savings of up to £20/ha can be possible.”

He suggests any adjustments to disease control programmes will come later in the season.

“Protectants are essential for septoria control, so there is an insurance argument for the earlier sprays,” Mr Barr adds.

Weed issues have to be addressed, he stresses, but there is more than one way of getting effective control with herbicides. “Mixes of various brands can have a £20/ha difference.”

He also advises growers to shop around for better agrochemical prices.

“There’s a 25% variation in price out there. And remember that trace elements and adjuvants are high-margin products, so question whether they’re needed every time,” Mr Barr adds.

“There’s an even greater difference with urea, which is around 20% less,” he says.