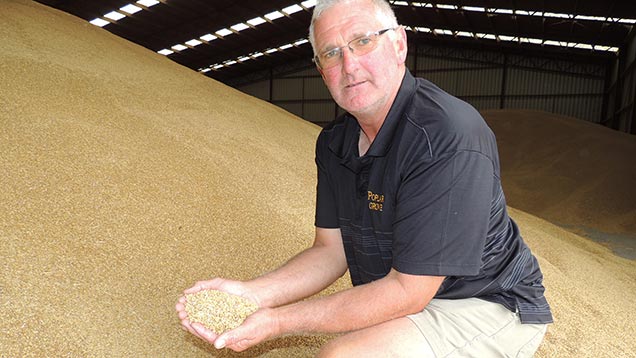 “We’re hoping to hear from Guinness in the next few days,” Mr Darling told Farmers Weekly earlier this month.

Like Mr Dennison, he cited an unusually sunny season and cool coastal climate as key factors.

The record-breaking variety 776 is a true winter two-row barley that is not available in the UK as it doesn’t have barley mosaic virus resistance.

“I’ve always thought varieties that carry that resistance have a yield penalty but if you’ve got the disease you can’t do without it,” explains breeder John Blackman, who started a cereal breeding programme with the New Zealand market in mind 10 years ago.

The variety’s resistance to other diseases is “pretty good, and compared with spring barley, very good”, he adds, pointing out most growers use spring types such as Tavern for autumn-sowing in New Zealand.

He says 776 has big grain, big ears, stiff straw and tillers well. As with all his varieties in New Zealand, it’s only available through the Exclusive Grain Group, an invitation-only growers club managed by Canterbury Seed (CS).

“It includes some of the most progressive arable farmers who are looking to raise yields to new thresholds,” says CS sales and marketing manager Craig Noonan.

“We did set it up from planting in March [early autumn] to have a crack at the world record but it was only in the last three months that we knew we were on track and only 10 days prior, when we took a last test cut to evaluate the yield, that we knew we’d be on the plus side of the record,” he added.

Part of that record attempt set-up was sowing the Blackman Agriculture winter barley variety 776 as a first cereal after oilseed rape: the rest of the 95ha “paddock” was in wheat.

“It just had the standard weed control and aphicides through the winter and we didn’t put any nitrogen on until the end of September. That first application was ammonium sulphate then we came back with the first urea 10 days later,” he said.

Including an estimated 50kg/ha of nitrogen available from the soil – “the test said 20kg but we didn’t believe it was that low” – the crop had a total of 318kg/ha of nitrogen.

“The average was 150kg/ha of potash but the range was nothing to 320kg/ha,” Mr Darling said.

A couple of herbage tests during the growing season revealed magnesium, copper and zinc deficiencies, which were corrected with foliar treatments.

Guinness World Records says it is reconsidering establishing a record for oilseed rape in light of recent “unofficial” benchmarks set by Lincolnshire grower Tim Lamyman in July 2014 and New Zealander Chris Dennison in January this year.

While the process is “only in the preliminary stages”, if approved the new record category would be “open in the coming months”, a spokesman said.

The fungicide programme started with a midwinter “clean-up” of 0.3l/ha Proline (prothioconazole) followed by a four-spray programme at 28-day intervals of Mogul, Aviator, Aviator plus Amistar and Folicur plus Amistar.

“We mostly used full label rates. The objective was to get the highest yield so we didn’t want to cut back on anything,” noted Mr Darling.

“We could probably get away with 1,000 and potentially heavier grain, though there was nothing wrong with the bushel weight of this at 71kg/hl,” he said.

By harvest the crop was leaning a little but still standing thanks to two applications of plant growth regulators and the variety’s inherently stiff straw.

Moisture content was 13.6%. “We very, very seldom cut barley at that so it shows it has been a very favourable harvest,” he added.

The fact that the rest of his barley did 12t/ha this year, mostly unirrigated and with some as third or fourth cereals, indicates how good a growing season it was, and suggests irrigation and the first cereal position of the record crop were less important factors.

There was “no secret recipe” in the agronomy package either, but he does believe variety, low seed rate, and min-till cultivation incorporating residues going back several seasons were key.

“We’ve lifted the pH to 6.3 and improved the water holding capacity of the soil by building the organic matter. It’s all these factors added together that did it, so that the soil is working for us,” Mr Darling added.

Ex-pat British agronomist Roger Lasham, who advised Mr Darling on inputs for the record attempt and the agronomy across the rest of the property, echoes that.

“He’s keeping the soil alive and his Claremont clay soils have excellent fertility. Too often in New Zealand growers beat the living daylights out of the ground,” he said.

Big holes have been dug on the farm to see where the roots are going and this showed that the roots are feeding off the whole profile, not just the top six inches, he added.

“Warren makes everything look very easy with his three crops. Everything’s planned two weeks ahead and he gets on and gets the job done when it needs to be done.

“Disease never gets a chance to get in and he puts the fertiliser on at the right time, with the right amount in the right places,” he added.

The crop’s location, less than a mile from the coast, and the season, were also key. “This has been a season to break records,” Mr Lasham added.