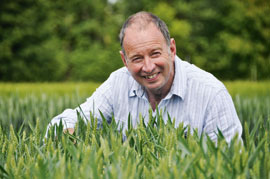 High-input, high-output barn-filling wheats are expected to remain popular and growers have more varieties with differing maturities to choose from for this coming autumn.

Some growers may be waiting to see how certain varieties perform on-farm this year before making their choices, he believes.

“The classic case this year is Oakley,” says Mr Best. “There’s a lot of yellow rust out there, but if Oakley performs well at harvest, given the conditions, many farmers will decide to stick with it.”

Following their HGCA recommendation, KWS is marketing three new winter wheat varieties this autumn. All three varieties have orange wheat blossom midge resistance built in, removing the need to spray for this pest.

“We expect hard Group 4 wheat Santiago to sell out and take an 8% market share in 2011-12 and become a leading barn-filling companion to Oakley and Conqueror.”

With a specific recommendation for the east and west, where around 80% of wheats are grown, Santiago is best drilled from mid-September up to 8 October, he explains.

“It performs less well on light land, but there is still only limited Recommended List data so far. That could be due to it being a slightly later maturing variety.”

KWS Santiago is an ideal first wheat and second wheat, where it is also a top performer, beating JB Diego and Duxford, says Mr Dodds. Three days later to mature than Oakley and a day behind Conqueror, KWS Santiago has a longer grainfill period, maximising yield potential as well as spreading harvest.

KWS Santiago is slightly taller and marginally weaker strawed than Oakley. It performs best in a high-input programme and should not be under-managed, advises Mr Dodds.

“It’s a good all-rounder and has strong disease resistance with no rating below five, including an exceptional seven for fusarium.”

A small amount of Podium commercial seed is available this autumn through Openfield.

KWS Target, a Robigus cross, is a solid Group 3 variety with consistent yields on light and heavy soils. “We have taken the Robigus plant model and improved it, notably in yield and yellow rust,” says Mr Best.

KWS Target matches last year’s newcomer Invicta for yield. Nationally, its treated yield is just 0.1% behind and in the east, it is 0.1% ahead.

“It’s an excellent biscuit-maker and has great export potential as it won’t need to be blended to make the UK’s boatloads,” says Mr Best.

KWS Target has a good all-round disease resistance package with no rating below six, he adds.

However, the variety did not get approval to be grown for distilling in Scotland, which Mr Best says is a “possible weakness”.