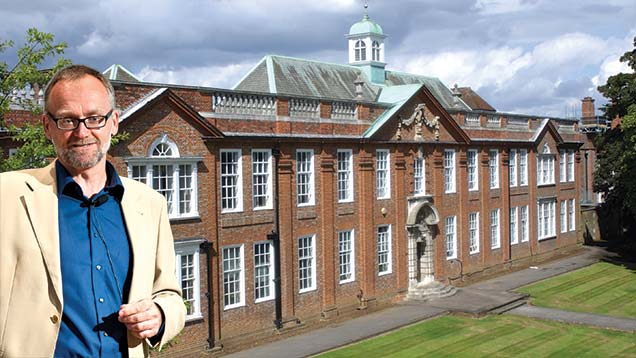 The new chief of Britain’s biggest agricultural research institute, Achim Dobermann, wants to speed up the time that basic science takes to filter through to the field and so drive a step change in farming.

The man who started his career as a sprayer operator on an East German state-run farm is keen to push ahead with work on higher-yielding varieties, developing disease resistance and achieving the better use of nutrients.

Only 10 months into his new job as director of Rothamsted Research, his mantra of driving science-based sustainable intensification comes after a four-year focus on genetics and genetic modification (GM).

The most powerful man in British farming research says GM is not always the answer and the focus should rather be on good field-orientated science to produce healthier soils and crops.

With a background in agronomy and soil science, he takes a holistic approach to research to tackle the tasks of increasing overall crop yields and making the most of applied nitrogen fertilisers.

“If we want to address the big problems in agriculture, we need to move faster to the field,” he tells Farmers Weekly.

The world’s oldest farming research body has a strong connection with the search for integrated solutions for long-term sustainable farming since its foundation 172 years ago, and this will continue.

Prof Dobermann is about to start mapping out Rothamsted’s strategy post-2017, which will look to meet the demands for higher production, better cost and resource efficiencies while using fewer pesticides.

His philosophy is that science must have a purpose and be in good shape to meet the demands of world agriculture.

“I think intensive arable farming cannot go away. We will have to find new ways to make it better,” he adds.

He envisages a more precise type of farming using smart crop protection techniques to stay one step ahead of troublesome insects, diseases and weeds.

A working life which has taken him from his native Germany to the rice fields of Russia, a world-renowned institute in the Philippines and the prairies of the US has put him in good position to lead Rothamsted.

His career has led to brushes with anti-GM activities in the Philippines, an experience that could put him in good stead at Rothamsted, which has had its own problems with GM opponents.

“There are strong opinions against GM, but we have an obligation to conduct science as transparently as possible and engage with the public,” he says.

Fifty-three-year-old Prof Dobermann grew up in a farming family in the old East Germany, worked on government-run farms before the fall of the Berlin Wall in 1989, and went on to take degrees in tropical agriculture and then soil science at the University of Leipzig.

He spent time as a PhD student in the flooded rice fields of southern Russia before moving to the Philippines and the International Rice Research Institute (IRRI) in 1992 to look at rice farming systems.

Eight years later, he was appointed a professor at the University of Nebraska-Lincoln where his research work included precision farming and understanding the yield potential of maize and soya beans in the arable heartland of the US.

In 2008, he returned to the Philippines as deputy director general for research at the IRRI, which by then had up to 1,000 staff and in his last three months took over in charge of the golden rice project.

This rice crop was genetically modified to produce vitamin A and its proponents claimed the vitamin-enriched rice could prevent blindness and avoid more than two million childhood deaths in the world’s poorest countries.

Opponents countered by saying the side effects were harmful and added that there were already programmes to address the vitamin A deficiency, and one test site for the rice witnessed vandalism.

“I have a balanced view of GM. It is one of many techniques needed for intensification but I am aware of its limitation,” he says.

Prof Dobermann started at Rothamsted last June well aware there had been demonstrations at the Hertfordshire site where GM wheat, modified to resist attacks of aphids in the summer, has been grown for three years.

He believes that if big changes are to be made in farming then GM can be useful as in creating crops such as drought-tolerant rice. Many genes were involved in this trait and work was only possible using GM, he says.

Big steps such as breaking through the yield barrier in wheat and improving nitrogen efficiency will need complicated biological intervention and GM would be faster than conventional methods.

However, the principal use of GM at Rothamsted, as in many other such institutes, has been as a research tool in the laboratory to identify traits rather than create an end product.

This is all hoped to speed up the impact of basic research to create new wheat varieties with greater yield potential and see better resistance to wheat’s most damaging diseases.

“Advances in biosciences give us new tools which we must be able to use to speed up the development of new varieties,” he says.

“Maurice was a biotechnologist, whereas Achim is an agronomist and soil scientist. That’s the difference we are seeing,” says one insider at Rothamsted.

Others also have noticed the shift to the applied end of research with Farmers Weekly arable columnist and farmer Andy Barr being impressed at a recent open day.

He highlighted work using new technology to detect septoria before it becomes visible on wheat leaves, a machine to identify sclerotinia spores in an oilseed rape field and looking at the intriguing ability of forage rape to trap oilseed rape pests such as cabbage stem flea and pollen beetles.

As Prof Dobermann looks to allocate his £30m-£35m annual budget after the end of the current 2012-17 strategy set by his predecessor, he is planning more of this joined-up thinking.

“We need a more systems-based approach, not just for farming but the whole food industry. We need science-based solutions for the sustainable intensification of agriculture,” he says.