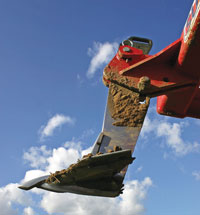 New seed drills were in the spotlight at this year’s LAMMA 2009 event, with direct and mintill sowing the main focus of the newcomers.

A revised set-up for the Moore Unidrill that could give the long-established direct and mintill seeder design a new lease of life was among several seed drill unveilings at this year’s LAMMA 2009 event.

“The Versadrill has been two years in development, but comes from 15 years of Sumo cultivation experience and three decades of Moore Unidrill sowing expertise,” says Shaun Weallans of SW Agriservices. “We will manufacture arable versions of the drill while Moore Unidrill continues to produce the smaller grass units.” 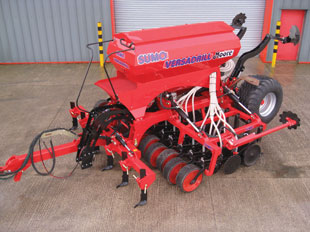 The Versadrill aims to iron out the perceived shortcomings of the Moore system on heavy soils by adding Sumo soil-loosening tines in front of the coulters.

Capable of working down to 300mm, the V-shaped soil-loosening profile of the winged tines is such that there is only one tine for every four rows, so minimising the added draught. They can be lifted out of work when not needed or when surface conditions are too slippery.

“The idea is to relieve compaction and aerate the soil as part of the sowing process, creating better growing conditions for the resulting crop and reducing the risk of disc smear,” says Mr Weallans. “I’ve done a lot of drilling with the machine during the development period and it works effectively on stubble, on chopped straw, on a mintill seed-bed and on ploughed land, so it’s a very versatile unit.”

On top of that, the Versadrill draws on recent lessons learned with the subsoiler sowing technique for oilseed rape. Blanking plates are used in the distribution head so that the drill sows two close-spaced rows either side of the soil-loosening tines, where the plants can put down long roots.

The seeding mechanism itself is unchanged from the Moore Tandem set-up, which comprises an Otico semi-pneumatic leading tyre to consolidate the surface ahead of a slightly angled disc that cuts through trash and opens a groove for the tungsten coulter which places seed in the shadow of the disc.

Adjustable linkage allows the weight carried by the consolidation wheel and following press wheel to be varied to suit different soil types and conditions.

SW Agriservices manufactures and assembles the rest of the Versadrill, including the 2700-litre hopper shared by the 4m, 6m and 8m versions, the metering unit and the distribution system.

“We tried several potential suppliers, but they were very protective, so we ended up designing our own,” says Mr Weallans. “The electric-drive metering system has interchangeable cartridges for different seeds, is regulated by a radar ground speed system and controlled by the RDS Artemis controller with multi-width calibration settings, one-touch calibration and on-the-go variable seed rate.”

A tine coulter drill designed for direct sowing into all soil types can work wider and for longer, thanks to development work by its Suffolk manufacturer.

The Claydon SR-Drill takes the principle of the firm’s original V-Drill (which remains in production) by placing cultivating and sowing tines in-line but uses a combination of “stone release” and spring tines rather than rigid tines to handle difficult soils. 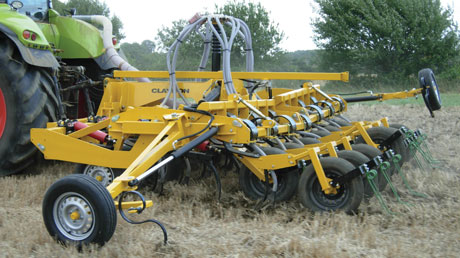 “The narrow leading tine in each case is set to work 100mm deep for cereals, 150mm deep for rapeseed and pulses to break the soil and create a drainage channel beneath the seed,” says Jeff Claydon. “The flexible coulter tine that follows uses an ‘A’ share to part any straw and leaves the seed in the narrow band of tilth, with sowing depth regulated by the press wheel that follows.”

The idea is to sow seed into a seed-bed but to cultivate only as much soil as necessary.

“Why waste fuel and time cultivating the ground between the crop rows when all you want to do is provide good conditions along the seed row?,” asks Mr Claydon. “We get more seasonal output from a smaller drill and the environmental benefits, in terms of carbon dioxide release and soil erosion, are considerable.”

The Claydon SR-Drill has an unusual double-frame design. The leading chisel tines, which are protected by a heavy-duty coil spring auto-reset break-back mechanism, are mounted on the heavy main frame for good penetration, while the coulter tines are mounted on a sub-frame that provides consistent weighting for even depth control.

Until now, the difficulty of folding this arrangement has restricted the SR-Drill to rigid 3m, 3.45m and 4m configurations.

But a cam mechanism devised to hold the coulter tine frame secure has resulted in a 4m folding version being developed, with a centre-split layout that allows the two halves of the frame to follow ground contours and fold to 2.8m for transport.

Instead of a chassis-mounted Sulky hopper with individual row metering, the £36,000 newcomer is used with pneumatic distribution supplied by either a tractor-mounted front hopper or Claydon’s new 3t capacity trailed Seed Pod.

This £42,000 unit is tapered to improve visibility to the sowing system, runs on wide flotation tyres and has an 11t capacity rear three-point linkage plus hydraulic services.

Another tine drill for direct or mintill sowing made its debut at LAMMA – the Samouri Contour (pictured) from French manufacturer Techmagri. 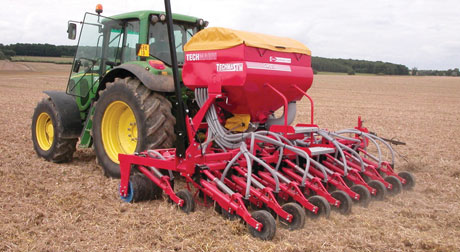 Rigid coulter arms held in place by a coil spring pressure mechanism are arranged in three rows on the Techmagri Samouri Contour drill. There are different tungsten point options to suit direct and mintill establishment techniques

The Samouri deploys three rows of tines on shallow angled trailing coulter arms, each held in work by a simple coil spring pressure mechanism that also provides some protection against stone strikes and the like.

“There are two coulter point styles, a vertical one for mintill applications and a forward angled design for increased penetration when working direct into stubble,” says Techmagri’s new importer, Simon Clarke. “Using a rigid rather than flexible coulter arm is intended to reduce seed bunching in the row.”

Press wheels are mounted along the front of the drill’s frame – except where the tractor tyres provide consolidation – and the semi-pneumatic depth wheel fitted to each coulter is designed with a soft centre to the rim to give a greater soil-firming effect either side of the seed row.

An Accord-type metering and pneumatic distribution system is used on all models 3m and 4m rigid 4m, 4.8m and 6m folding and trailed 8m folding with 5000-litre seed hopper. A 12m version with telescopic axle is planned for next year.

Stronger drawbars, frames and front tool brackets – along with a bigger choice of front-end cultivation equipment – are among upgrades to Väderstad’s Rapid grain drills.

The Rapid 400 to 800 S also get an output boost from a 10% increase in hopper capacity, which can be extended by a further 700 litres if required. The extra capacity should not mean having to use a bigger tractor, says Väderstad, but it will bring extra output by reducing the number of hopper refills needed.

Superior quality disc bearings on most models will also help because they won’t need to be greased so often, typically every 1200ha for a 6m drill.

Pöttinger’s 3m and 4m trailed Terrasem mulch drill is being joined by a 6m version this year, with an 8m version to follow soon, says importer LandMec.

It follows an established “cultivate/press/sow/press/harrow” formula, using two rows of 510mm-diameter angled discs to complete seed-bed preparation ahead of a levelling harrow and 425mm-wide press tyres.

If imitation really is the sincerest form of flattery, the team at Moore Unidrill should be flattered by French manufacturer Sulky-Burel’s decision to build its own “Uni-drill” instead of continuing to sell the original.

The Easydrill (imported by Ruston’s Engineering) comes in two sizes – 3m in plain grain and grain/fertiliser forms with a full width hopper and individual row metering at £47,350 and £51,450, and 6m folding with a 2600- or 3200-litre hopper and central pneumatic seed distribution starting at £89,400.