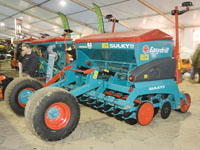 Due to be launched at Tillage, Reco’s Sulky Easydrill instead made its debut at LAMMA.

Shown is the 3m grain-only version, but later in the year there will be a 3m grain and fertiliser machine and folding 4m and 6m models.

The trailed min-till machine weighs more than 1t/m, enabling up to 250kg of pressure to be exerted on each coulter. To ensure the most effective weight transfer, the drill is also fitted with a central hydraulic ram, enabling the operator to choose between applying weight to the front or rear of the drill. Sulky claims that a tractor with less than 100hp is enough to pull the Easydrill. Prices start from £47,350.