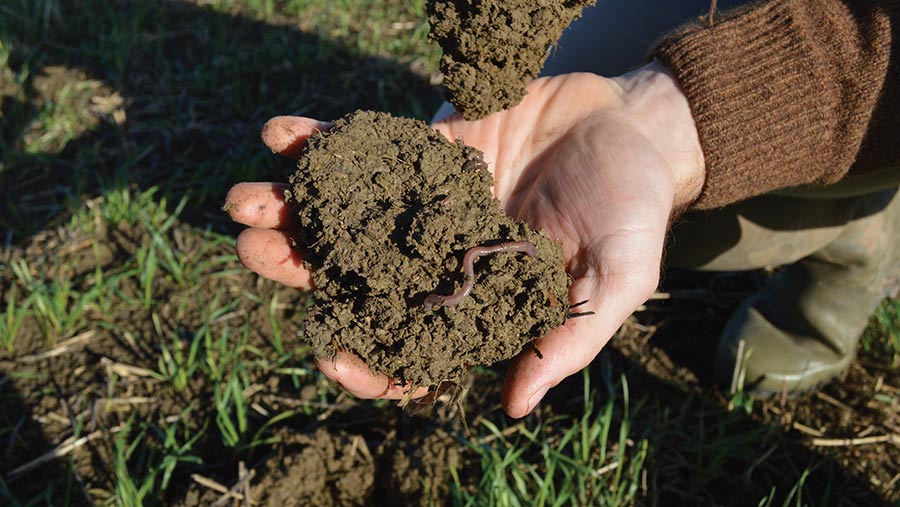 A spring barley and pea mix, along with grass leys, is helping David Marsh improve soil health and cut the carbon footprint on his mixed Cotswold farm.

The barley-pea combination is used for whole-crop silage or crimped grain to help feed his cattle, as well as giving his arable crops a boost by making his soils more workable and cutting herbicide costs.

The mixed crop and the grass leys are proving very useful break crops for his arable land, increasing soil health and helping to finish 150 cattle a year for Waitrose using nearly all farm-grown feed and fodder.

Mr Marsh’s heavy land had been run largely in two blocks – one of permanent grass on the Cotswold escarpment and then arable land on lower land – but integrating the two has given clear benefits.

His two main aims on the 190ha Pardon Hill Farm in Gotherington, six miles north of Cheltenham, are to feed his suckler herd and followers on 100% farm-grown food and grow 500t of milling wheat on a Warburtons bread-making contract – and integrating arable and stock is key to achieving this.

Cattle are finishing earlier and at better weights and grades, his blackgrass herbicide bill has halved and he is better able to travel on his well-structured arable soils.

Integral to improving soil health was his move towards more direct drillings and use of cover crops on a route to a more sustainable farming model. 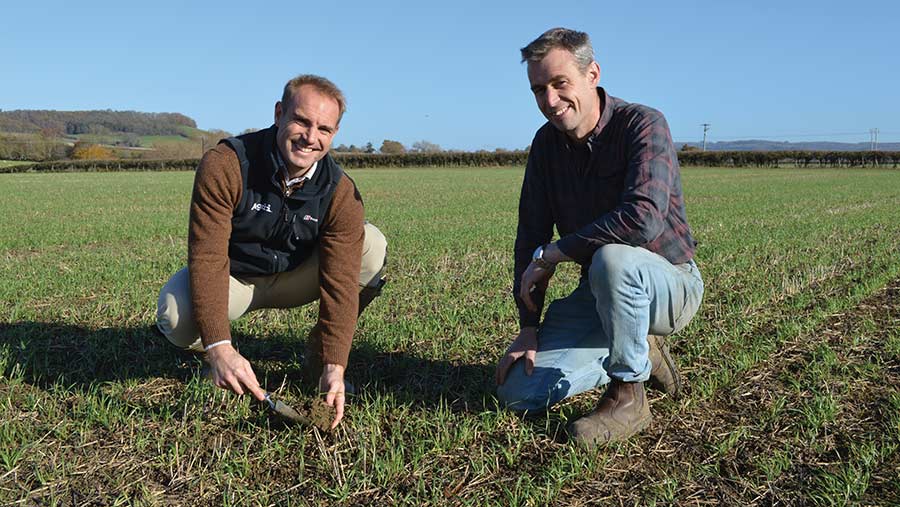 Mr Marsh started growing his barley-pea mixture 12 years ago, and after advice from his agronomist, John Vickery, he has now brought direct drilling to most of his arable land.

The barley-pea mix is drilled a little later than traditional spring barley. This gives Mr Marsh more time to control blackgrass in the spring and harvest it early enough for the blackgrass seed not to have set and shed and cause future problems.

Mr Marsh is growing the spring barley variety Irina plus a marrowfat pea, as these leafy peas can use the barley as a climbing frame – using the two together gives good standing power and they mature at the same time.

In early April, some 15ha of the mixed crop is drilled into the previous crop’s stubble, with his Weaving DG disc coulter direct drill,  after a spray of glyphosate herbicide to give a clean weed-free start.

The crop needs no nitrogen fertiliser, as the peas – being a legume – fix their own  nitrogen. Very little herbicide is required, so it is virtually gown as an organic crop.

This mix can be cut for whole crop silage in early July to produce a yield of 25t/ha for the silage clamp, or left another 10 days and cut with a combine to give 10t/ha of crimped grain plus good barley-pea haulm straw.

The 30% moisture grain to be crimped is first rolled, preservative added, and put in a separate silage clamp to supply the cattle with a feed of about 15% protein content.

Half the arable land on the farm is down to wheat, growing winter varieties Skyfall, Crusoe or spring variety Lennox for Warburtons, which have a good clean weed-free entry following the break crops.

“We can drill early because the break crops have helped us achieve near zero blackgrass,” he says.

The wheat is drilled in late September and yields typically 9t/ha, with the aim for 10t/ha of a premium bread-making sample.

Mr Marsh can establish his wheat by spraying glyphosate to control weeds and direct drilling using 6-7 litres/ha of diesel/ha, compared with 30-plus litres using his former, more traditional method of ploughing and power harrow-drill combination.

“The soil structure is hugely improved and the crop establishment better, with a small amount of crumb giving good seed to soil contact,” he says. 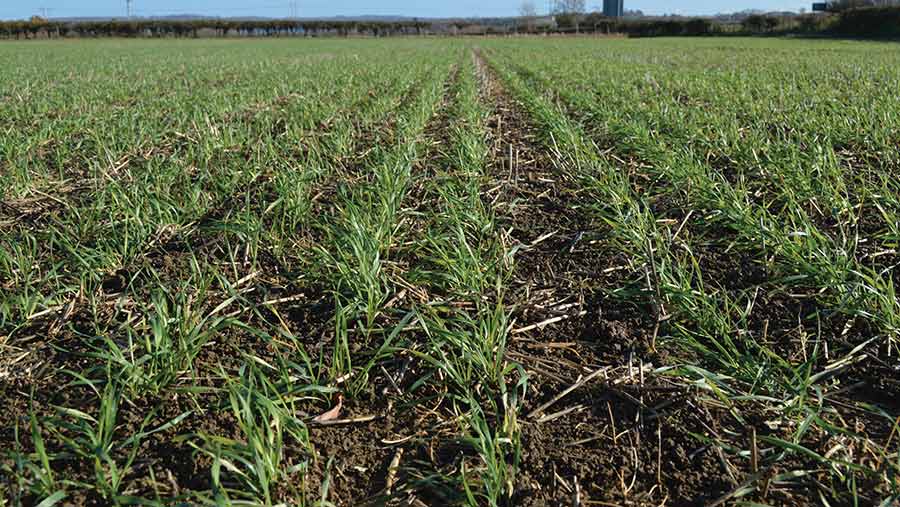 Looking at a field of a second wheat, Skyfall, in November, there was a clear spring in the ground showing a sign of good soil structure down below. The soil had also benefited from generous amounts of farmyard manure.

This low-cultivation approach is releasing less carbon than ploughing and intensive cultivation, while the permanent grass banks are a huge carbon sink.

“We are farming more sustainably by integrating our arable and livestock operations, and along with the direct drilling, our carbon footprint is much reduced,” he says.

Mr Marsh is reluctant to say that the approach has improved his wheat yields, but cultivation costs have come tumbling down, and blackgrass herbicide costs have fallen from more than £100/ha to well below £50/ha, and use of cover crops have also helped soil structure.

“We are less reliant on chemicals and less susceptible to weed-resistance problems, while direct drilling and the cover crops have cut water run off from fields,” he says.

Cover crops using a mix of non-cereal species such as buckwheat, linseed, vetch and phacelia are used where possible, which help to improve the soil structure and, therefore, keep it relatively free drained throughout the winter.

The break crops also help give a more varied diet for his suckler cows as he aims to finish all his progeny from his herd, which include Hereford, British Blue and Simmental cows all crossed with an Angus bull.

Mr Marsh buys in a few store cattle and aims to finish 150 cattle a year, which head for Waitrose via Dovecote Park and earn him an Angus price premium. Currently, he is using 80-90% home-grown feed for the cattle with the aim of reaching 100%.

The cattle are thriving on a mix of silage made from his ryegrass-red clover-vetch grass leys, whole-crop silage and crimped grain from the barley-pea mix, and maize – high-protein and easily digestible Tiffany spring bean can also be added. 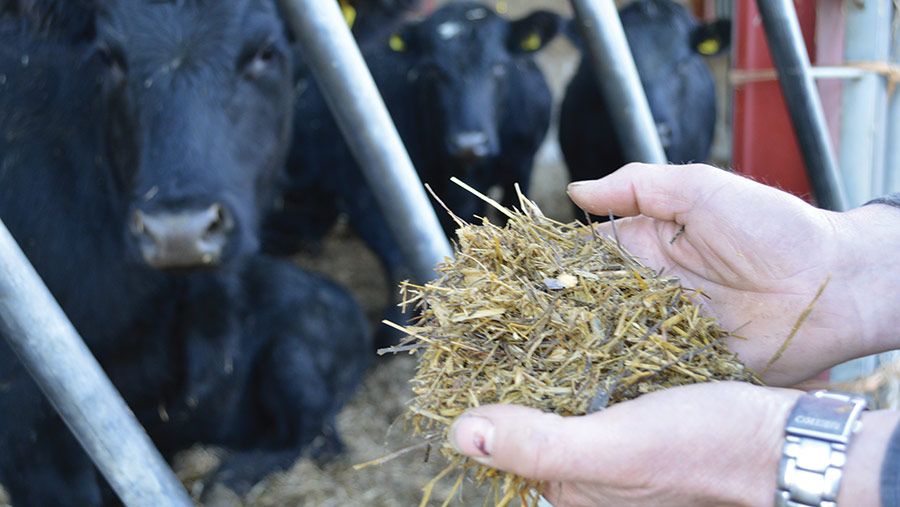