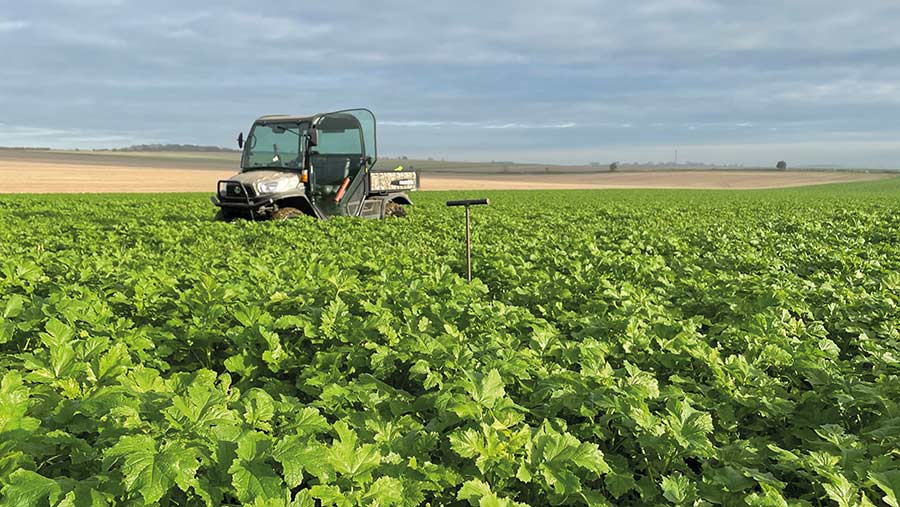 Growing cover crops before potatoes has reduced the number of cultivation passes and increased yields on a North Yorkshire farm.

Cover crops were first grown ahead of potatoes on James Pick’s family farm near Filey in 2014.

The farm grows a diverse range of arable crops across 450ha, with about 200ha being potatoes, largely for McCains, on rented land.

The farm has two main aims when growing a cover crop, says Mr Pick. First, add organic matter into the seed-bed by growing as much biomass as possible.

This helps improve resilience during summer droughts, which is important as the potatoes are unirrigated. 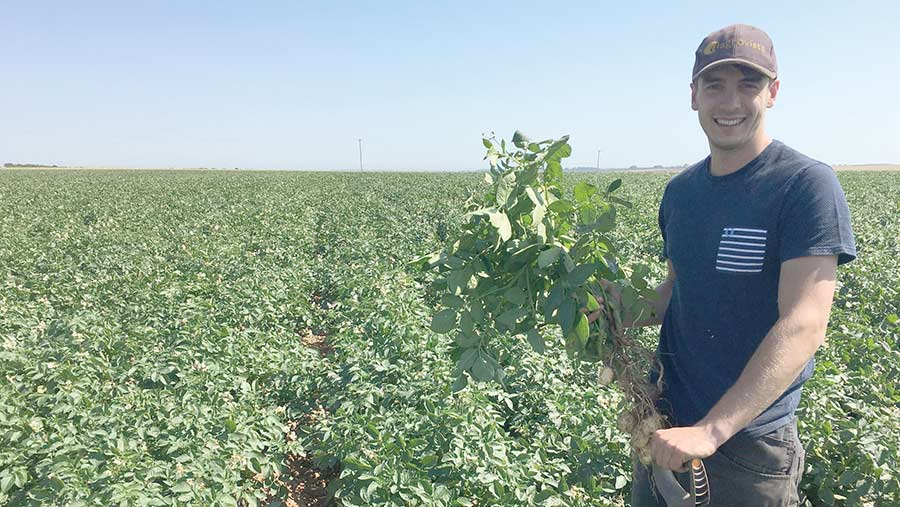 The other aim is to reduce the number of cultivation passes required before planting the potato crop.

“We’ve seen how much more friable the soil is after growing an overwinter cover crop compared with a bare stubble,” he says.

Establishment would ideally begin from mid-August, but with wheat harvest often dragging into September and baling straw also common on the land they rent, that can be a challenge.

“But in our experience, unless you have an incredibly kind back end, it’s almost pointless to get a cover crop in if we can’t get it planted by 15 September, because you don’t get the growth.”

Originally the covers were drilled with a John Deere 750A direct drill, but on rented land they were too often finding the soils weren’t suitable for direct drilling, with the slot not closing or water sitting in the slot and the seeds rotting.

“We’re now using a Carrier with a seeder unit, or a Horsch Sprinter, which gives you that little bit more tilth and we’re getting better establishment.”

Cover crop species mixes are tweaked depending on field location and rotation, and whether livestock will be available to graze over winter.

On rented land a typical mix is oats, phacelia, mustard, berseem clover and vetch, unless oilseed rape is in the rotation, which leads to brassicas being excluded.

Where sheep are available to graze, the mix is simplified to oats, phacelia, vetch or a clover, fodder rape and stubble turnips.

Cover crop growth has been very variable over the years, depending on land type, location and establishment date.

“We’ve got covers ranging from 3ft high, which we will top, down to 1ft. There’s even big variability across fields.”

Glyphosate is usually used to terminate the cover around eight weeks ahead of primary cultivations, with big covers topped four weeks after the glyphosate to knock them down.

An exception was last season, when growth was poorer, and the covers were left growing until primary cultivations to maximise what growth there was.

“That worked well, but the main reason for desiccating is so the cover starts to break down, and hopefully we get more of the nutrients that the cover has soaked up available for the potato crop.

“When you are renting land, you need to get that bang for your buck. But we’re still learning,” says Mr Pick.

The proof that cover crops are helping has come both in potato crop yields and a reduction in cultivation passes in some fields, he says.

Two side-by-side fields were grown, one with a cover crop, the other without, last season.

“The field with the cover crop we were able to establish with a pass with a flat-lift and a Sumo Trio before rowing it up, so it removed two cultivation passes compared with the field next door.

“It makes perfect sense when we can do that, and when it came to the potato yield, the field with the cover crop did 65.8 t/ha, while the one without did 61.3 t/ha.

“There was an obvious impact in having that extra organic matter and soil in better condition going into the potato planting season,” says Mr Pick.

While reducing cultivations hasn’t happened on every field in the past, he thinks that, as they are now more assured in their practices, there will be the opportunity to reduce it by one or two passes in future.

That could save £25-£50/ha in costs, especially if one is ploughing.

In the longer term, he hopes that soils where multiple cover crops have been grown in the rotation may even allow bedforming to be the first pass.

“There is a lot of potential to improve on current practices like growing cover crops,” he says.

Planting a cover crop before potatoes resulted in an average yield boost of 3.0 t/ha across 32 strip and small plot trials comparisons within AHDB’s five-year rotations project.

But flexibility in management is important, particularly around termination dates, and it is important to consider the potential risks of increasing wireworm and/or slug pressure, the researchers say.

Niab CUF set up three years of trials at its Cambridge site using a simple oat cover drilled at 70 kg/ha in September.

One generally consistent result was that leaving the cover crop growing until just prior to primary cultivations led to soil drying at the 30cm depth of those cultivations more quickly than where no cover crop was grown, or earlier defoliation used.

“That would help avoid soil damage when making primary cultivations.”

But in one year that drying only occurred in late April and most growers would have started planting two weeks before then.

Over the three years of the project, planting a cover crop gave on average 1.9 t/ha advantage over no cover, while there was a 0.5 t/ha advantage for leaving the cover undefoliated compared with early termination.

However, that difference was not consistent through the three years of the project.

Other trials on AHDB SPot Farms, not part of the AHDB Rotations project, had previously discovered cover crop use could lead to improved cultivation speeds of on average around 10-12%, and much lower fuel use.

“The key with these improved soil conditions is not to overcultivate them. Move faster and shallower, if you can, and don’t create excessively fine seed-beds just because it’s easier.”

The AHDB project also compared 29 larger-scale strip trials with and without cover crops. In these the average yield response was 2.6 t/ha, which was statistically significant, Dr Stalham says.

Using an average cover crop seed and establishment costs of around £210/ha and current potato prices of £190/t, there’s around a 2:1 return on investment from growing the cover, he calculates.

Cover crops may be contributing to wireworm problems in potatoes by maintaining a green cover through an extended period of the rotation, a recent review for Cambridge University Potato Growers Association has found.

“So the 3.0 t/ha yield response might not have been marketable yield. I do think there is a benefit from cover crops, but species choice is important to get the benefit without the potential increase in wireworm damage.”

Canadian research suggests buckwheat might be antagonistic to wireworm, while a biofumigant mustard planted ideally four years before the potato crop might also exert some control, Dr Allison suggests.

“Wireworm is associated with grass, so potentially winter cereals might need to be avoided at key points in the rotation. But there is a knowledge gap.”