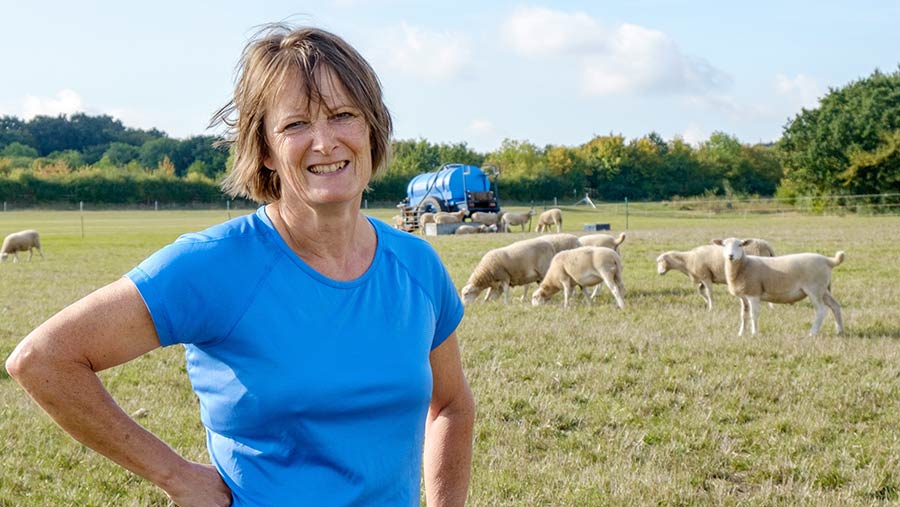 A new breed of easycare sheep that naturally sheds its wool and has good resistance to worms has convinced an Essex grower to reintroduce livestock into her arable rotation.

The last of a 300-strong flock of Suffolk-cross mules left Parklands Farm, near Chelmsford in Essex, in the year 2000, as they proved to be too labour intensive alongside the growing arable enterprise.

See also: How a Wiltshire grower is raising yields with attention to soil

However, the new Exlana breed promises to be low-input, and should allow grower Christy Willet to extract additional value from her cover crops while also benefiting her soil.

Ms Willet first started considering the benefits of reintroducing livestock after trying out cover crops in her rotation at the 475ha farm.

Cover crops are an ongoing experiment on her heavy clay soils, with 30ha being grown in front of millet, and grazing has so far proved to be the best option for removing the biomass.

Without grazing, the cover forms a solid mat, which retains moisture and makes it harder to drill.

Growers have three main options if they want to graze off their cover crops:

This year, Ms Willet moved her own flock of 50 Exlana on to the covers in January, and let them graze about 7ha until the end of February.

The rest of her acreage of cover will still be grazed by a neighbour’s sheep while her flock is small.

“Ian is always looking for something to put his sheep on. We don’t pay him and he doesn’t pay us, it’s a reciprocal arrangement,” she says.

However, she has known arable farmers to charge about 20p a head a week for grazing.

The flock strip grazes between two lines of electric fence and is moved every three days to prevent damage to the soil.

“If it’s very wet then they will puddle and cap the soil, so you do have to move them, but it is very simple.”

To provide grazing for the rest of the year, Ms Willet plans to reseed grass leys somewhere on the farm every few years.

In addition to providing fodder for the livestock, the grass leys will have rotational benefits, such as helping with difficult blackgrass areas and improving the organic matter content of the soils.

Ms Willet describes the Exlana as a modern breed, which, although wasn’t bred specifically for arable farmers, has been embraced by them.

Exlana breed at a glance

While her previous flock of Suffolk mules were profitable, the system needed labour at critical times, such as during lambing, when the workforce was out cultivating.

Now, her son Hew, who she farms in partnership with, is keen to increase their flock size from 50 to 100 as the breed is so easy.

The result of 14 different breeds being crossed together, Exlanas have developed the ability to shed their wool, and don’t require shearing or trimming.

Instead, the wool sheds in the spring and summer, helped by the sheep rubbing themselves up against fences.

In the future, Ms Willet plans to make a U-shaped frame to help the animals to have a good scratch.

“We will still get fly strike, and need to treat them, but they will stay a lot cleaner.”

The animals are also good on their feet and have been bred to have a natural resistance to worms, with treatment based on regular faecal testing rather than just being wormed routinely.

Ms Willet has just finished lambing her new herd outside for the first time. Overall, it has gone pretty smoothly, she says.

After putting the ram in for just 34 days, 30 of her 50 hoggets got in-lamb, all with singles except for three sets of twins.

Of those 30, just six required assistance because they were taking more than an hour to lamb once feet were showing.

“These may have been able to lamb on their own, I was probably over cautious,” she says.

Despite weighing about 55-60kg themselves, some of the hoggets produced lambs weighing more than 12kg.

Ms Willet says they have proven to be attentive mothers, and while two ewes took a couple of days before their milk came in, all the lambs are now being reared by their mothers.

As the breed is so low maintenance, they are potentially a good option for arable farmers who want to move into livestock for the first time.

“They are a good option, but you need someone with sheep to come and look at them, to pay attention to the fencing and their health.”

Being a new breed, it isn’t easy to get hold of Exlana stock, but Ms Willet plans to take advantage of this by breeding pure Exlana ewes to sell on for breeding.

However, if it was to be bred with something meaty, it would produce a good carcass, she says.

The male lambs will be fattened up and sent to a local abattoir.