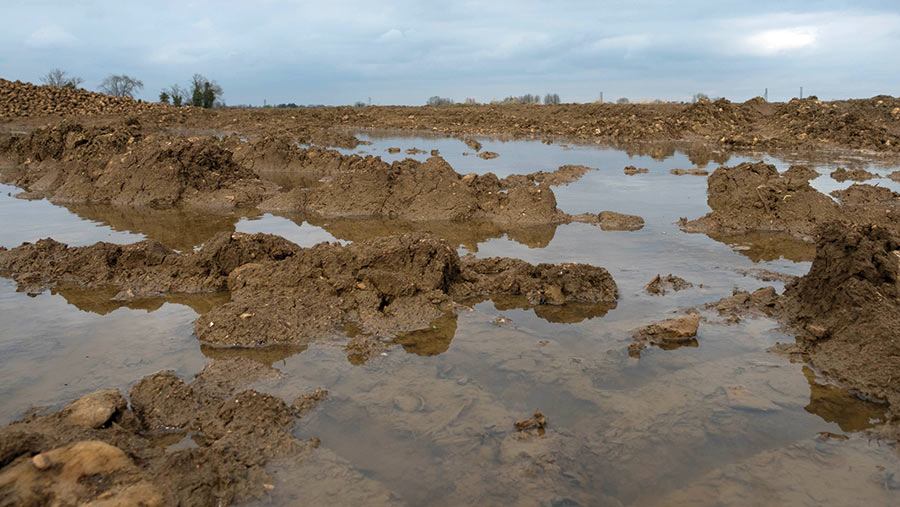 Many growers will be forced to leave land fallow this season and, although that means no income, there are big benefits from higher crop yields in the future and herbicide savings.

However, in order to achieve these advantages, arable farmers must effectively manage fallow areas and not simply leave fields as they are, which would otherwise risk further soil damage.

Matt Ward, services leader at agronomy firm Hutchinsons, advises growers hit by the heavy winter rains to identify how they can maximise soil health by fallowing or by other means.

“Growers need to get the spade out, dig a hole and find out what their soil is doing. Soils may not be able to produce a profitable crop this year, but it’s vital to manage soil health so, next year, they can, with yield increases possible,” he says.

There are two options for growers to consider when planning for a non-cropped area this season.

The first is to use fallow as an environmental focus area to meet greening requirements for the Basic Payment Scheme (BPS), which is still essential despite Defra’s relaxation of the three crop rule.

This option can account for 30% of a BPS payment, but its use restricts any cultivations and herbicide spray applications on the land.

However, he says fallowing land may not always be an option for some growers who need the income from a commercial crop to remain financially viable, in particular tenanted farms. 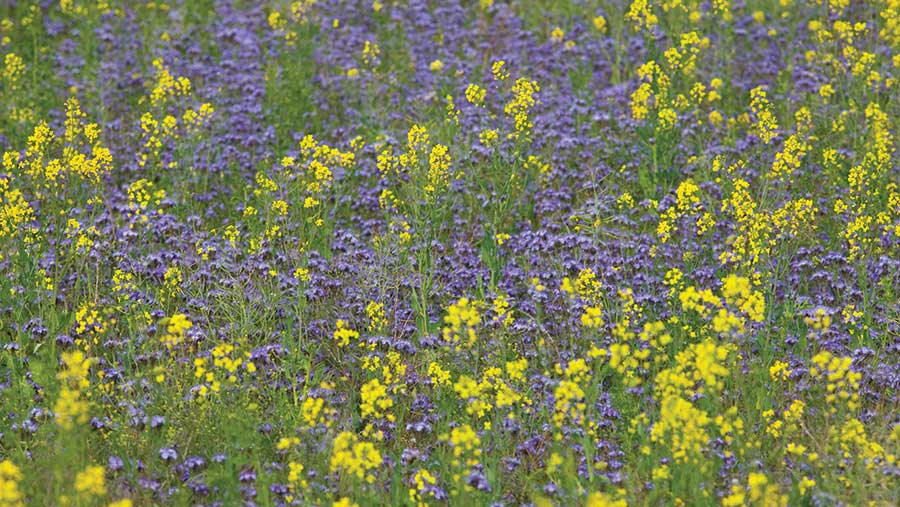 “Buckwheat acts as a great scavenger of phosphorus, which it holds in the root zone for the following crop to utilise,” he says.

However, he warns that buckwheat can cause photosensitivity in sheep and cattle if large quantities are consumed. To avoid this issue, diverse crop mixes containing at least three different plant species should be grown.

Fallowing untouched stubble is not ideal for blackgrass control, as it needs to be functioning to ensure soil doesn’t go dead and dry out, says Toby Kellie, Hutchinsons’ Cotswold agronomist.

Leaving the soil dead would increase the need to cultivate in the autumn to produce a seed-bed, leading to a high influx of blackgrass.

The fallow area will need to be cropped with a summer cover to bring soil health benefits. It will encourage blackgrass to grow this spring, which can then be sprayed off before going to seed.

By having this cover, the soil will be in a good friable condition for direct drilling in the autumn, which will decrease the amount of blackgrass that will germinate in the autumn, post-drilling, through reduced soil movement and soil profile mixing.

Depending on pressure, there will also be an opportunity for an autumn stale seed-bed by merely lightly cultivating the top 5cm (the seeding zone), thereby, ensuring maximum germination and spraying off before drilling.

Planting a crop in soils that have been waterlogged can help rectify soils and alleviate drainage issues, by pumping water out of the soil.

Farmacy agronomist Alice Cannon explains how compaction on the soil surface is a major concern for arable farmers this season, as a result of heavy rain and traffic wheelings.

“Plastic soils can greatly benefit from a mixed cover crop, as these plants will begin to restructure the soil. It’s essential farmers focus on soil health from the top-down rather than the bottom-up,” she says.

Ms Cannon highlights how sub-soiling can help manage drainage on waterlogged land, but advises growers to wait until the autumn to carry this process out, after a cover crop has been planted.

Once a summer cover crop is established, soils will become drier and able to carry heavy machinery, which would otherwise damage the soil.

“If, at depth, the soil is plastic, the worst thing growers could possibly do is begin sub-soiling as this will damage the soil and create compaction problems deeper down the soil profile,” she adds.

Soil should be gently cultivated in the spring by lightly working the top 5-8cm, allowing the soil to aerate, and deep cultivations should be avoided as they can bring up large clods.

Crops should be planted from the end of April until early May, and rolled when conditions are dry. It’s key not to plant too early, as some cover crop species can bolt and quickly produce seed heads.

Growers should aim to have the crop mix in the ground for 8 to 12 weeks, but this is dependent on soil type and weather, while some species – especially millet – turn woody if left in the ground too long.

Heavy rainfall has led to nitrate leaching, says Tim Kerr, Hutchinsons’ crop nutrition manager, but he highlights how double the usual amount of lime may have been lost from soils this season – up to 500kg/ha. So fallowing is a good opportunity to address this by applying liming materials.

High magnesium levels can cause drainage problems due to the element’s ability to bind soil together. Applying calcium sulphate can help alleviate this issue.

Adverse winter weather has meant Lincolnshire grower Ed Pritchard doesn’t have a single crop planted on his 300ha farm, near Waddingworth, just east of Lincoln, as soils were flooded and waterlogged.

He is now opting to fallow 60ha of his land, after receiving 580mm of rainfall since last September, in a bid to enhance soil structure, reduce water content throughout the soil profile and cut his blackgrass weed populations.

“The sheer amount of water we received over the winter left our land in an inadequate condition to financially grow a crop. We chose to fallow land in order to improve our soils so that we can grow a good crop of winter wheat next autumn,” he says.

A cover crop mix of spring oats, radish, phacelia and linseed on his fallow land will be planted during the second half of April, and he advises growers to apply nutrients to the cover crops, as healthier plants bring greater benefits to soils.

“Spring oats are excellent at enhancing soil structure, while radish has a large root system which breaks up the soil and acts as a water pump,” he says.

Cover crops will be left in the ground until he is ready to drill wheat next autumn, where varieties Gleam, Gravity and Zyatt will be grown.

Sheep from a neighbouring farm usually graze off cover crops on the farm, and Mr Pritchard hopes his fallow cover cropped land will be no different this year.