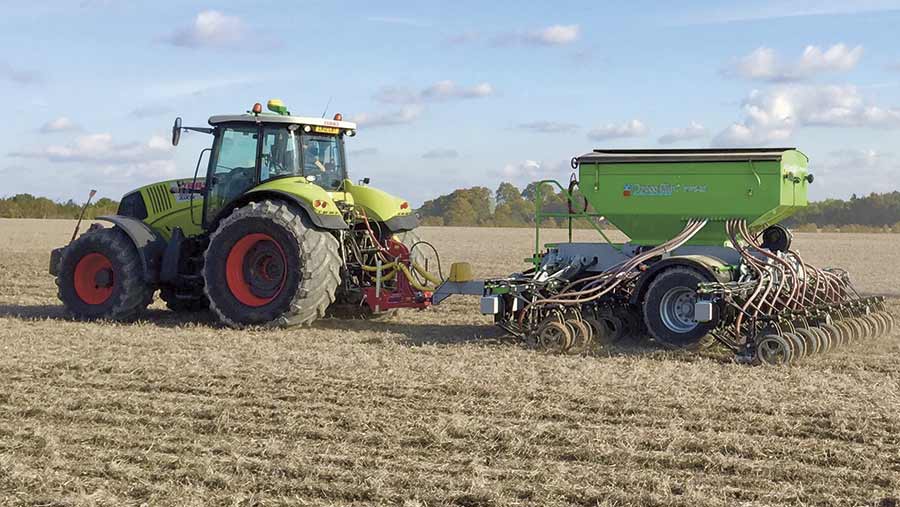 Oxfordshire grower James Alexander hopes to increase yields while drastically cutting his diesel bill by switching to direct drilling across his 323ha of organic cropping.

The direct drilling advocate already employs no-till across an additional 81ha of conventional cropping – matching his neighbours’ yields with an average of 8.6t/ha while spending far less on cultivation and pesticides.

With a diesel bill four times higher and yields plateauing at an average of 3.7t/ha, direct drilling is the obvious solution for this contract grower to maximise his returns from the organic cropping area.

Without being able to plough, weed control is usually the hurdle organic growers have to overcome if they are to direct drill, but Mr Alexander is achieving this through a combination of cover crops, mechanical weeders and high seed rates.

Instead, his problem is not being able to successfully kill off the cover crops grown for both nutrition and weed control to allow the following winter wheat to be direct drilled.

Problem being solved: Forms of weed control other than ploughing must be found if organic farmers are to be able to use no-till cultivation on their farms.

Approach: Using a mixture of high seed rates, mechanical weeders and cover crops to manage weeds, and employing a crimper roller to kill off cover crops.

In the absence of glyphosate the owner of cross-slot drill manufacturer Primewest has built his own crimper roller, a knife roller designed to roll, cut and bruise cover crops in front of a direct drill, to experiment with.

“We wanted to build one for a long time, but with glyphosate’s future in doubt long-term, we thought we must do it now,” he says.

After the first roller was snapped up by a customer in Lincolnshire, Mr Alexander built a second roller to allow experimentation on his own farm.

Around 81ha of cover crop are grown each year to put nitrogen back into the drought-prone limestone brash over rock soils after a lengthy rotation of winter wheat, spring barley, spring or winter oats, beans and then spring wheat.

This one-year break is extended to two in areas plagued with blackgrass as part of a zero-tolerance approach to the grassweed, an approach that often sees him top sections with high blackgrass plant populations.

While these cover crops are direct drilled at the end of the rotation, Mr Alexander currently has to plough after the one- or two-year break before he can drill winter wheat.

“Because of the cover crop we haven’t moved the soil for two years, then we have to move it all up,” he says. “Ploughing is the worst thing you can do for your soil.”

Mr Alexander, who is part of the Innovative Farmer’s alternative methods for terminating cover crops trial, says the difficulty in killing a cover crop without glyphosate lies in the fact that good cover crops are a mix of species.

A mix means that the crop will not reach the ideal stage for crimping, flowering, at the same time.

For blackgrass control a combination of red clover and rye grass is used, while the one-year fertilising crop is vetch and oats.

“We tried crimping so that we can kill the vetch but not the oats. The oats just grow back, even if you mow them.”

The year he is trying vetch with rye, the main cover crop used in the USA, for the first time.

He plans to lay the crop onto the ground in June and crimp it to create a weed-suppressing mat which will last until the winter wheat is drilled in October.

If it doesn’t, a second cover crop will be drilled in July or August. This is likely to consist of a frost-intolerant plant, or mix of plants, such as buckwheat, mustard or phacelia, which can remain in the wheat crop and be taken out by the cold.

Depending on how experiments with crimping this new mix work this summer, Mr Alexander thinks he could be direct drilling his cereal crops within three years.

While this crimper goes on the front, he is also thinking of looking at trailed versions which would go over the ground faster.

“Hopefully, over summer we can try out a few things,” he says.

He is also planning to try establishing a permanent clover cover crop, which would remain in the bottom of the crop to provide both nutrition and weed control.

“If we could get clover to linger in the field all year round, we would be laughing, but we need to find the right variety.”

As well as the British climate being a challenge to achieving this, not being able to mow the clover to stimulate growth after the commercial crop has established is a problem.

Mr Alexander has also found that once certain types of clover have established, herbicides are necessary to get rid of them.

For this reason, he trials new ideas on the conventional farm first, so herbicides are always available as a fall-back position when they don’t work out.

If glyphosate was banned, Mr Alexander would like to think he would be able to continue direct drilling on his conventional farm as herbicides are already used minimally.

Blackgrass is no longer a problem, so crops of wheat and rape are often grown with just a pre-emergence herbicide.

He is also using less fungicide and no insecticide, and uses the farm to showcase the benefits of ultra-low-disturbance direct drilling to his drill customers.

Meanwhile, with the organic licence due to run out at the time of Brexit and very mixed messages coming from Defra about soil health, coupled with high input costs, the owners of the organic farm may take the opportunity to revert.

James Alexander’s strategy for weed control on his organic land involves high seed rates, cover crops and the use of mechanical weeders.

A seed rate of 400 seeds/sq m is used in both spring and autumn to try to compete out weeds.

Blackgrass is a problem in some areas on the farm and is met with a zero-tolerance approach. Select areas of crops where the grassweed is gaining a foothold are often topped to stop the spread of seed.

Last season Mr Alexander topped a field of beans which had become more grassweed than beans, and considered topping a field of wheat.

A two-year cover crop of red clover and rye grass is put in for two years to eliminate the grassweed in affected fields.

Docks and thistles are the biggest issue on the farm. These are cut out of a growing crop using a CombCut, a selective weed mower, which is passed through the crop four or five times a season.

The coarser weeds are caught in the fixed blades and cut off completely or severely damaged.

This new series aims to showcase arable farmers who are ahead of their time and are trying new approaches, whether it’s growing new crops, taking a radical approach to growing oilseed rape or being a pioneer in the use of new technology.

If you know of any farmer or wish to be featured in this new series, contact the arable editor at richard.allison@reedbusiness.com.