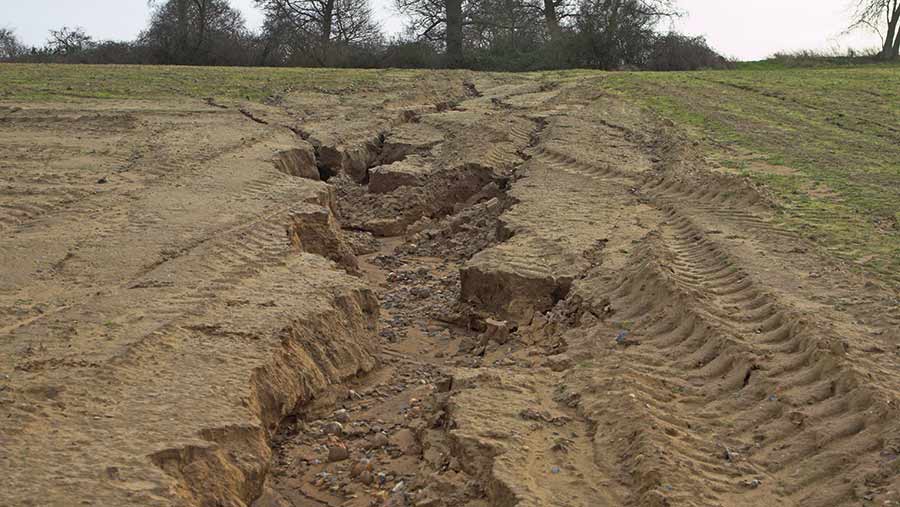 Reduced-tillage, cover crops and good rotations are needed to cut the £165m-plus annual cost of soil erosion on farms in England and Wales.

The overcultivation of soils is costing growers and taxpayers dearly as annual water erosion can be as high as 15t/ha of soil washed down the drain while the rate of soil formation is estimated at only 1t/ha.

Jane Rickson, professor of soil erosion and conservation at Cranfield University, says it has taken 1,000 years to create 150mm of topsoil, and intensive cultivations can lead to the reduction of this valuable resource.

She suggests growers should be trying methods such as minimum-tillage and using cover crops to cut the damage from multiple cultivations and to add more organic matter.

This will allow more carbon and water to be stored in soils which will help to mitigate climate change effects, rather than the overuse of machinery which can reduce a soil’s storage capacity.

“Grey steel has taken soil structure away, while roots will put it back,” Prof Rickson says.

She adds that organic matter is key and if this can be maintained or increase there will be a knock-on effect to improve the biology of the soil, the water/air ratio, soil structure and nutrient content.

The cost of soil erosion in terms of lost agricultural production, damage from flooding and to water quality and also from greenhouse gases emission is estimate at £165m/year, even before taking into account the cost of overcultivation.

The resultant loss of organic matter will lead to growers needing extra costs in terms of fertiliser and fossil-fuel inputs which can lead to even more greenhouse gas emissions.

Mr Geraghty, who echoes the views of Prof Rickson, says: “We can’t build soil with steel, but we can build soils with plant roots.”

“We are losing 75bn tonnes of soil annual around the world across the globe so is it a major concern,” he says.

Livestock have a big part to play in improving soils, while he added that “hoof and tooth” are great tools in controlling troublesome weeds.

“If we want yields to go up we need more biological soils,” he says.

Cambridgeshire arable grower David Walston also believes livestock will have a role. He says his three methods of improving soils are reduced-tillage, cover crops and introducing animals, and its the last measure he thinks will make the biggest improvement.

He is experimenting with grass leys and cattle grazing on his 900ha arable farm in Thriplow just south of Cambridge and is waiting to see if arable crops after the grass break will result in a yield boost.

All the speakers were contributing to a session called “Soil Saviours” at the Oxford Farming Conference held earlier this month.