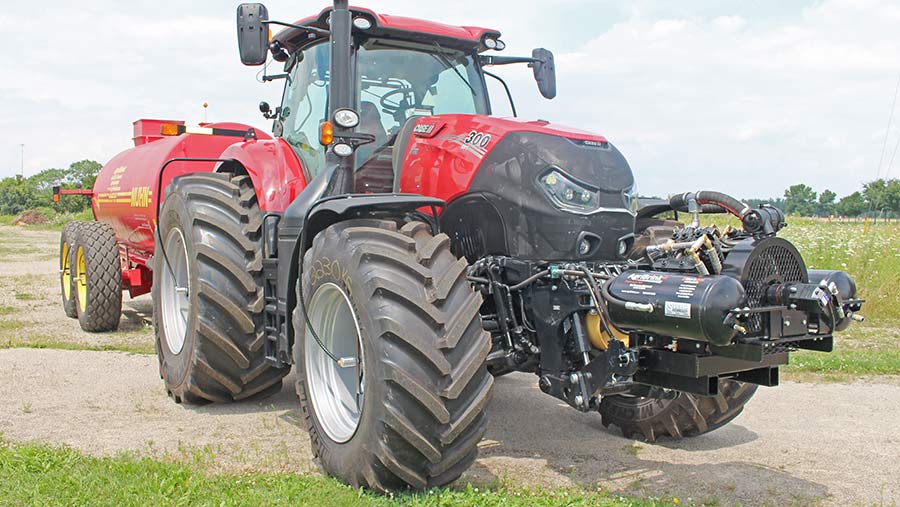 Ontario farmer Jake Kraayenbrink has invented his own auto-inflation system to keep tyres at the optimum pressure, lowering the risk of soil damage.

It just takes him a few seconds to change the tyre pressures on his tractor and 24t twin-axle slurry tanker, ready to tread lightly across the field.

High tyre pressures are necessary for travelling on roads between fields, but hard tyres are highly damaging to soils.

Therefore, he reduces the pressure to increase the area of tyre in contact with the soil.

See also: Causes of soil compaction and how to beat it with CTF

He says it is like comparing skates and feet. “Would you have a young boy on skates stand on your feet, or a 250lb person in bare feet?

Why soil compaction is an issue

He recalls, back in the 1980s, when he worked on a farm further south with heavy clay soils – there was a culture of always using the lightest tractor and equipment, and only driving in fields where necessary.

“The farm regularly won yield competitions at farm shows, and you could pick out his crops from his neighbours.” 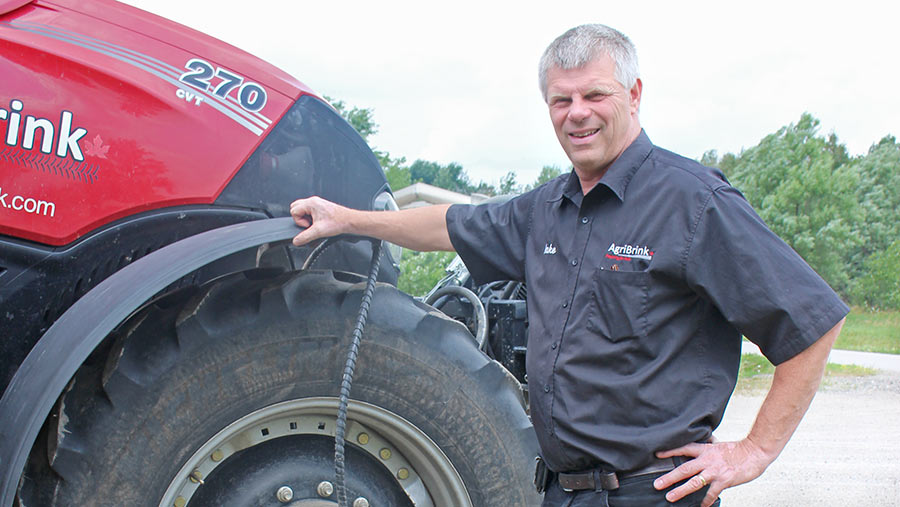 Mr Kraayenbrink believes it was down to better soil health. “Crop roots need air and soils need structure to enable air and water to move freely. Heavy equipment can squeeze out air.”

In 1989, he moved to the Drayton area where he experienced the compaction damage his heavy manure tanks were causing, especially on wet soils. It was then that he began paying stricter attention to tyre pressures and his in-field footprint.

However, there was the practical challenge of how to inflate and deflate tyres when moving from field-to-field. The trucking industry has been using auto-inflation systems for some years and he went about getting one.

Eventually, he purchased a system from western Canada, but he soon discovered that it was too slow.

“It took a few minutes, and then one day it just didn’t work.” So he got a local engineer to take a look and this was the moment when Mr Kraayenbrink decided to build his own system.

“We removed the system and we started to drill different size holes in the tyres until it was big enough to allow moving from 35psi to 15psi, or vice versa, in 20 seconds.”

He exhibited the system at a farm show and started to sell units in 2011 to local farmers, as well as those overseas including Switzerland.

Today, he has sold more than 100 units and his system is an optional extra for the Canadian-built Nuhn tankers. 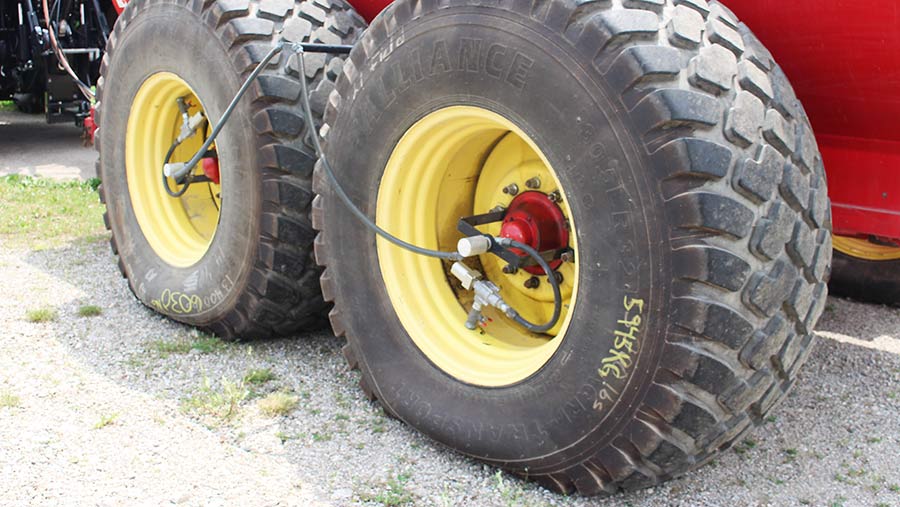 It’s not just soil health; having the optimum pressure on the road is bringing savings.

He points to one customer running four tankers: “Tyres are lasting longer and he is seeing better fuel efficiency.”

The system costs about $20,000 (£12,200), depending on the number of channels needed. Each channel covers a different tyre type.

For example, the front tyres will be inflated to a different pressure to both the back tyres and those on the tanker. “So for a tractor and tanker, you would need three channels.”

The family is now working as part of a three-year project with Russell Foubert, a professor at Conestoga College in Kitchener.

He is looking into the feasibility of fitting cameras and sensors to the slurry tanker, to measure soil compaction and track changes over time.

“It will be hard to do [measure level of rutting], but we are looking to see if we can do it.” He believes it will be possible. 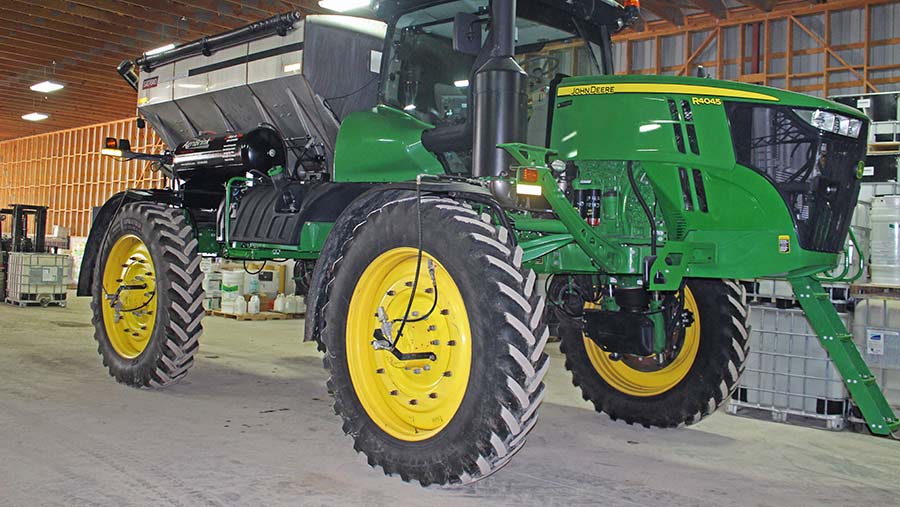 The system is fitted to the farm’s 37m sprayer, 37m fertiliser spreader and maize drill.

“We have a lot of untiled [undrained] land and there were some compaction issues,” explains arable operator Matthew Musselman.

“We were starting to see yield losses, so we decided to take advantage of the auto inflation technology.”

He explains that they used to run tyres at 45psi, but that was not ideal for either road or fieldwork.

Since fitting the system, the John Deere self-propelled fertiliser spreader runs at 55psi on the road.

He drops down to 35psi in the field and reduces it further to 25psi after spreading half the 8t load.

“We don’t go straight to 25psi, as we don’t want to risk blowing a tyre,” says Mr Musselman.

Benefits
“We are noticing that fields are not rutting anymore and you can’t see where you have been when you go back in spring. Before we could.

“Another advantage is that we can run when the dirt is not quite fit and still not rut the land.”

He explains that even being 12 hours ahead of others can give them the edge.

“It could mean getting on land after it has dried a little in the afternoon, rather than having to run overnight.”

Anecdotally, he also believes he is using less fuel on roads.

Mr Musselman says the key advantage with the Canadian system is its speed of use, as other systems take a few minutes.

“Getting more done and better, in less time, is the key to arable operations – hence speed is important.”

How does the Agribrink system work? 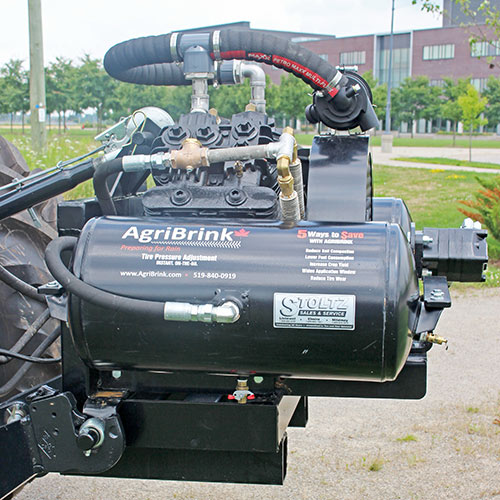 There are three parts to the Agribrink auto-inflation system: the air supply and tanks, the air hoses and swivels, and the control unit, says Mr Kraayenbrink. 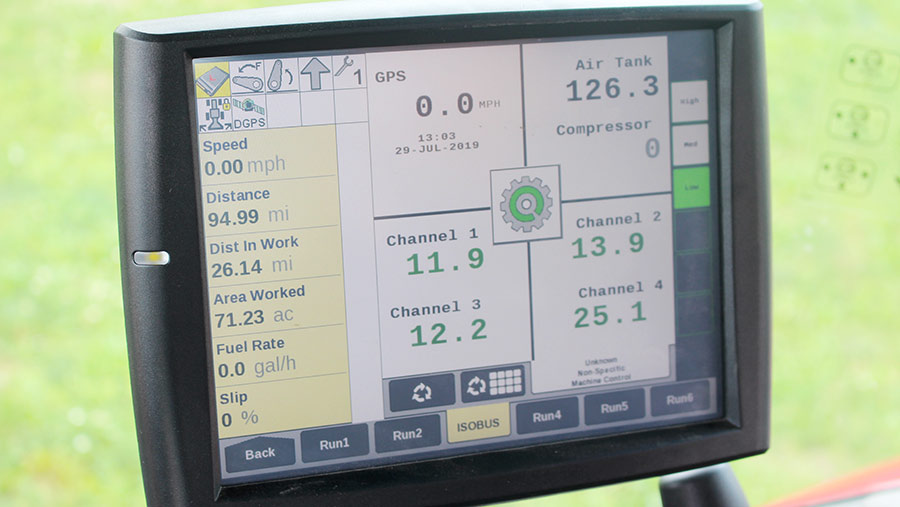 “It’s designed for ease of use. Operators simply change the pressure using the toggle switch on the end to the pre-set high, medium and low pressures,” says Mr Kraayenbrink.

The high and low options are for the road and field, respectively. He adds that the medium setting is more for field ends, when using machinery that doesn’t have rear steering, as turning may twist tyres too much. It is also for when crossing over a road.

When setting the preset levels, he suggests first looking up the manufacturer’s recommended pressures.

“For example, Mitas has an app that provides the figures. All you need to enter is the tyre size, speed and weight.”