Australian farmers started adopting controlled traffic farming (CTF) back in the early 1990s. Their main aim was to improve productivity and safeguard the environment, but more than 20 years later it’s still only a minority of farmers actually practising it, says Don Yule, the chief executive officer of CTF Solutions and a key developer of CTF in Australia.

“About 13% of Australian farmers are doing it right, another 21% are doing it wrong, and the remaining 66% are not doing it at all.”

“Australia’s soils are ancient, fragile and poor in nutrients,” says soil researcher Pauline Mele of Melbourne’s Centre for AgriBiosciences. She continues: “Nearly 200 years of traditional farming practices have compacted these soils, destroying their structure, causing erosion and loss of nutrients applied as fertiliser.”

Australian farmers also have to cope with very variable weather involving long wet and dry periods and often droughts or floods. CTF aims to manage the degradation of soils, and improve soil porosity and water retention. That means less run-off and erosion and a reduction in waterlogging after rain.

“CTF is being used successfully, with quite similar overall results on the sands of Western Australia, the heavy clays of northern Australia and the low-quality loams in New South Wales,” says Jeff Tullberg from the Australian Controlled Traffic Farming Association.

The height of the bed above the furrow base was usually between 15-30cm, and the furrows carry wheeled traffic to minimise compaction within the bed. They also act as pathways for drainage in sloping fields.

Farmers using CTF say they have gained the confidence to increase crop frequency by planting into relatively dry soils with the assurance that any rain falling on the crop will reach the crop roots thanks to improved soil structure with larger spaces between soil particles.

CTF in Australia almost always involves no-till or min-till drilling straight into stubble. Very little cultivation is done with grains, pulses and forage crops. Cotton and sugar cane sometimes require more cultivation but it is still kept to a minimum.

Farmers using CTF run all their farm machinery on the same tracks whether for seeding, fertilising, spraying, harvesting or collection of the crop. High-precision GPS with +/- 2cm accuracy is invariably used.

Most machinery is sourced from the USA and built to imperial measurements, whereas Australia uses metric widths. So adaptation and modification are the order of the day.

Tractors can be modified or new units purchased to ensure all wheels (or sometimes tracks) keep to the same permanent traffic lanes.

Tracks in Australia are normally either 2m or 3m apart. An unfortunate by-product of the discrepancy between imperial and metric is that 3m often turns out to be 120in.

Farmers buying equipment need to be aware that the nominal advertised width is sometimes not the same as exact operating width. This can have a major impact if you are planning to use 2cm accuracy in the field.

The Black family started farming on the original 320ha farm on the Condamine Valley plains on the Darling Downs in 1963. They have since bought adjoining properties and progressed to highly mechanised farming on their 1,600ha farm.

They grow sorghum, cotton, wheat, barley, corn, some sunflowers as well as chickpeas, mung beans and a few soya beans.

All labour is provided by the family – Laurie, his older brother Jim, Jim’s son Peter and 18-year-old grandson Matthew.

After attending a CTF conference in 2013, Laurie Black and his family were inspired to fine-tune their existing CTF operations.

They needed to make some changes to allow the combine and chaser bin to run on the same tracks, used for all other farming operations.

They first added an extension to their Case 8120 combine’s unloading auger to give an extra 1m throw from the harvester.

Then they built a grain-catching platform on the side of their chaser bin to pull the flow of grain in from further away.

Their move to controlled traffic has been going on since the 1990s, when Dr Tullberg told them that their varying widths of machinery were compacting 80% of the fields, not counting the wheel tracks of the trucks which collected the harvest.

They use an RTK mast shared with six neighbours, and when this has problems they can use another neighbour’s signal.

Machinery used on the farm comprises state-of-the-art tractors and harvesters fitted with Autofarm 2cm GPS, all bought or adapted to run on 3m tracks. 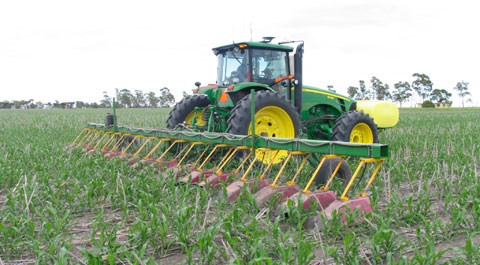 A guide to RTK guidance