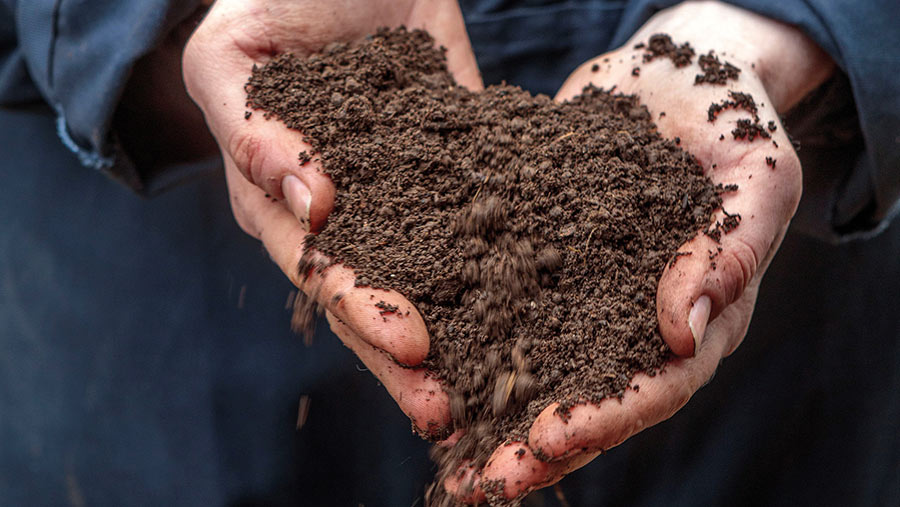 Everyone has a slightly different recipe or method for making compost, and it’s perhaps a little trickier than it seems.

But get it right and you have an extremely valuable soil amendment that can help improve soil health quickly.

See also: How to build a Johnson-Su bioreactor to produce your own on-farm biology

Green Farm Collective co-founder and long-term no-till and compost user Simon Cowell says those changing their system to no-till would see a turnaround in their soils quicker the more compost they could use.

After nearly 20 years of using compost on his 160ha farm on heavy Essex clay soils, he tends now to use compost as a biological inoculant on the fields where the biology is not working quite as effectively and need a helping hand.

Typically, most fields receive compost once every five or six years.

Building biology in the soil is part of his strategy to reduce synthetic fertiliser requirements. He hasn’t used phosphate or potash for more than 20 years and relies on soil biology to make that available.

“Compost also helps with building a good soil structure. I can see changes in four to six weeks if the worms take it down and it gets washed in,” he says. That structure change is permanent in his no-till system.

An arable-only farmer, he sources horse muck from local liveries to form the base of his compost.

While he says muck isn’t completely necessary to make compost, it is perhaps the easiest and cheapest source of nitrogen. Composting helps stabilise nutrients and make them available to crops.

He mixes in woodchip obtained from tree surgeons, adding carbon and more biology, building a pile through the winter, gypsum and some good topsoil taken from the farm.

The ratio is about 10 loader buckets of horse manure and woodchip and one each of gypsum and topsoil.

This is tipped, usually into the field where it will eventually be used, into a windrow about 4m wide, and then shaped as necessary by a loader bucket.

“It has to be done in the summer when its drier, otherwise it makes too much mess,” Mr Cowell says.

He follows the usual rules for siting muck heaps when collating the material over the winter. Muck heaps can be in a field where you are going to spread it for 12 months.

“The muck heap does get a bit warm but doesn’t do much composting until its moved and aerated. Obviously be careful where you put it – away from ditches and drains, but because of the way it is made, you don’t get much effluent or runoff.”

Once in rough windrows, he runs his 4m compost turner through, and provided there is enough moisture and the carbon to nitrogen balance is good.

This kicks off the biological activity with the air and the thorough mixing of the ingredients within a couple of days.

But if it is too dry, water needs to be added, he says. Take a handful and squeeze after the first turn to see if it stays in a lump. If it falls apart it is too dry, if there is moisture, it’s too wet.

“Add water if needed after the first turn. It just runs straight through if you do it later and won’t make any difference.”

Monitoring temperature is important, especially during the first couple of weeks.

High temperatures are important for speed of breakdown, but as soon as the pile gets 65C, he turns it to stop it getting any hotter.

“Once it gets over 70C, you’re changing what can survive over those temperatures to things that are not going to live in soil in a field.”

The PAS100 standard suggests compost should be held at more than 65C for seven consecutive days for sanitation reasons – killing weed seed and pathogens, but Mr Cowell suggests this messes with the compost’s ability to act as a biological inoculant.

“If I’ve got the mix right, I need to turn it every day for about a week, and then as the nutrients are used up it starts to slow down and need turning less frequently. Within two to three weeks, and eight to 10 turns it is usually finished.”

Speed of making is influenced by the carbon-to-nitrogen balance, he notes. “If the nitrogen is too high, it works too fast and gets too hot, whereas if the carbon is too high, it is much slower and might never get to temperature.

“That can be good as you’re working with more carbon-based biology, so it will be more fungal, but it takes a long time to make.”

Once made, he leaves it in situ until he’s ready to spread it, usually straight after harvest.

“The longer you leave it made the better. If you could leave it for a year it would mature from mostly bacterial into one where fungi proliferate, but it is more convenient to spread it after harvest.”

He uses contractors to spread the bulk product at about 10t/ha rather than making it into a compost tea or applying as a seed dressing.

“With the bulk product you’re providing a home for all the bugs, bacteria and fungi to live in, and the inoculation into the soil is a much more gradual process.

“By putting it in a compost tea, you’re putting it into an alien environment and it’s not going to thrive. It’s competing with biology in the soil that is already adapted to that environment without any help,” he suggests.

“I have tried it, but I thought it was a waste of time.”

With an on-farm source of farmyard manure from 40 breeding Hereford cows and their followers, he started “rudimentary composting” three years ago by flipping muck heaps over with a loader, improving the muck without fully composting it.

“About a year ago, we bought a compost turner locally, which are like hen’s teeth to find.”

A 3m-wide Morawetz Fold III, it’s attached to a tractor by three-point linkage with a corkscrew-like turning cylinder to aerate and mulch the compost mix.

“Last year was our first for producing farm-scale compost from about 500t of manure.

“Compost is a much more balanced and easier product for the soil life to use than manure,” he says.

“In the past we spread manure, ploughed it in and next year ploughed it back up, which signifies the soil life wasn’t using it.”

In a system that no longer uses the plough, compost also doesn’t hamper direct-drilling.

It is part of an approach, including cover crops and livestock integration, designed to get his soil’s biological ecosystem working, and in turn the nitrogen cycle, to drastically reduce synthetic nitrogen requirements. 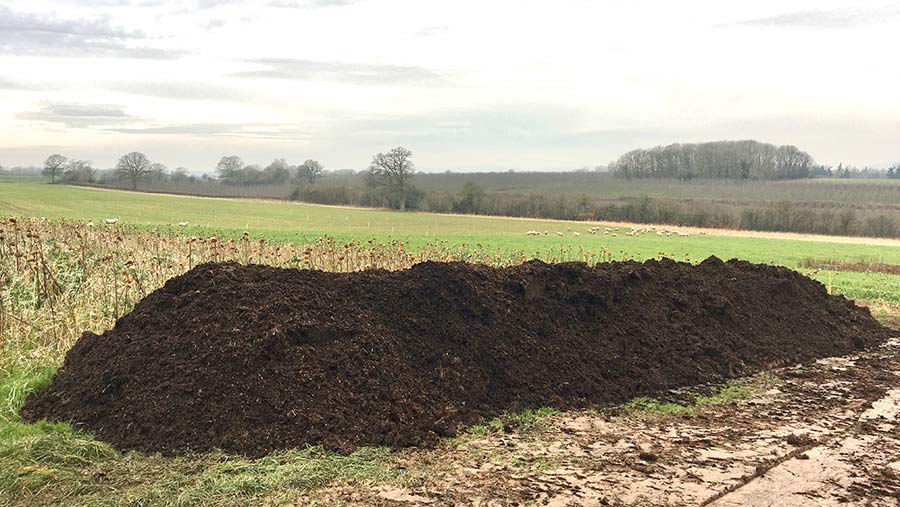 The farm used a capital grant to build a covered muck store, which helps prevent the manure becoming too wet and anaerobic over winter.

In the spring, the store is emptied onto land where the compost is to be used, or where previous muck heaps have been sited, into 3m-wide pyramid-shaped windrows.

Woodchip from hedge laying, soaked in molasses and seaweed, is added.

“It would be good if Defra started looking at giving grants for dedicated concrete-based composting areas.”

He turns the compost four to six times, with the total composting time taking six to eight weeks.

Like Mr Cowell, he turns when the compost is getting too hot, but a little less often – usually every four to five days initially, stretching out to seven to 10 days later.

Cattle muck can be inconsistent as a raw material with more or less straw, and wetter or drier, especially if stored outside, Mr Lewis notes.

“There’s not much you can do about that, but you will always transform it to a much better product by composting it.”

Spreading at 12t/ha takes place after harvest as soon as the field is cleared, with catch or cover crops planted immediately afterwards.

Cereal crops are direct-drilled into the catch crops later in autumn.

“The main objective of composting is getting the soil biologically active. I’m not too fussed about it as an organic amendment, as you can easily add organic matter by growing cover crops and grazing grass leys – it’s about using a product that is biologically applicable to the soil.”

Using compost is one part of his attempt to reduce his reliance on synthetic nitrogen alongside cover cropping, direct-drilling, animal integration and growing clover understories, he says.

“We’re growing some wheat this year with just 60kgN/ha, so we’ve massively cut back on nitrogen and also fungicide use.”

Tips on composting from The Land Gardeners

Using this method they raised organic matter from 5.6% to 12% in 10 years on a horticultural farm in Oxfordshire.

Here are some of their tips for making Climate Compost:

Project trialling large-scale use of compost 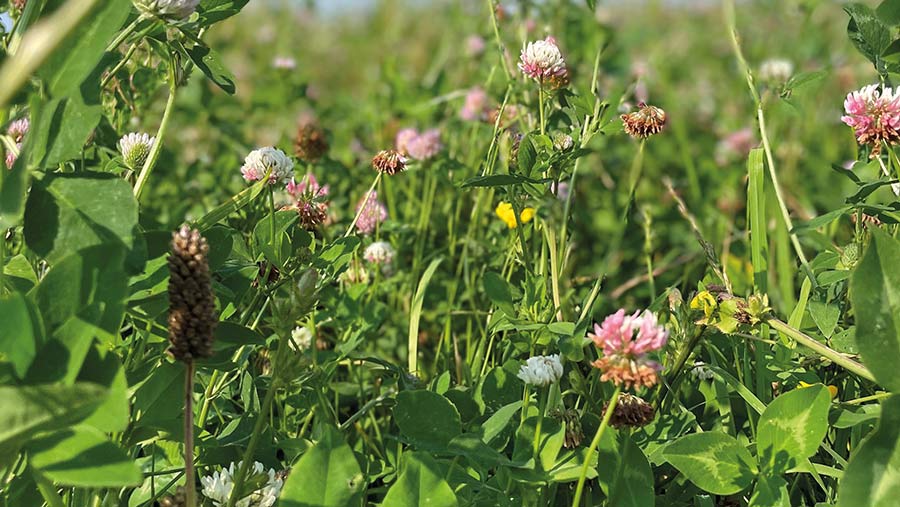 A 104ha project trialling the Land Gardeners’ Climate Compost on the Althorp Estate in Northamptonshire is direct-drilling small amounts of climate compost with seed, to make into compost teas applied at regular intervals across the season.

“A big issue for farmers, is using compost at scale, which we’re looking to solve by using it in this way,” says Bridget Elworthy from The Land Gardeners.

At Althorp, 5 or 10 litres/ha of the microbially-rich compost is direct-drilled with 30-species herbal ley cover crops or 24-variety GS4 legume and herb-rich swards. Compost tea is then applied at six weekly intervals through the growing season.

Applying compost as a bulk product is less efficient than applying as a compost tea or direct-drilling it with seed, suggests Tim Williams, who is managing the Althorp project, as well as using it on Erth Barton, a 120ha farm in Cornwall he is regenerating for the Anthony Estate.

He uses about 40t of manure produced from six weeks of housed cattle to make compost, with additions of hay, straw and crops grown on the farm, including sunflowers, buckwheat, chicory and borage, which also form part of his Countryside Stewardship scheme.

The tea is made by blowing air through a conical-shaped 1,000-litre tank filled with 800 litres of water, 40 litres of compost and a food source dependent on the soil microbial population to which it will be applied.

After brewing for about 24 hours, he applies the tea through a flood pump at 300 litres/ha with a specific low-pressure, high-volume nozzle imported from New Zealand, which doesn’t damage the biology during application.

“It works out about 10 litres of physical compost/ha. It’s not a lot, but it’s about trying to maximise the biological diversity within the compost.”

So far, results of the trials at Althorp have been extremely promising, says Ms Elworthy.

“The growth in the herbal leys has been incredible. These are mob grazed with dairy cattle from the Kind Dairy and a neighbour’s sheep.

“The trial team is hoping to put in Wildfarmed grain in the autumn on these regenerated pastures,” she concludes.