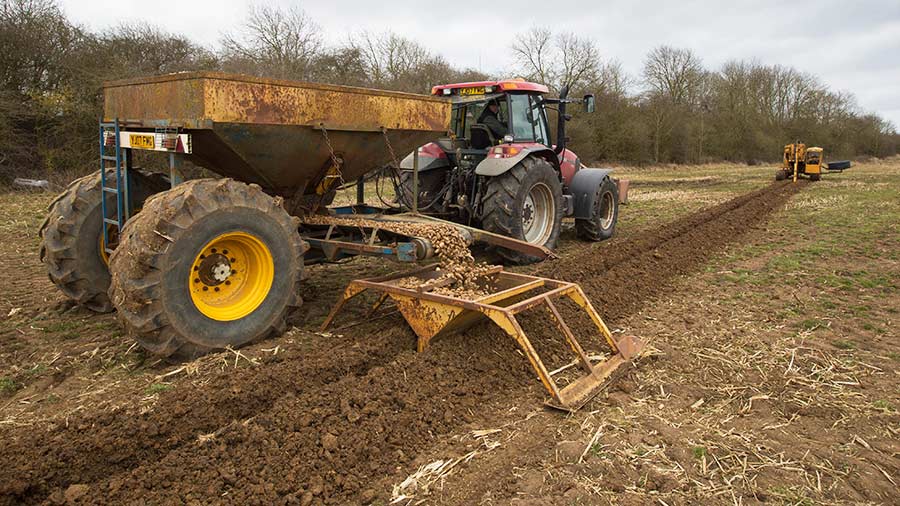 Lightwater Farms, based near Ripon in North Yorkshire, is in the process of adopting direct-drilling with a focus on improving soil health and biodiversity.

Other measures include cover cropping and widening the rotation.

However, farm manager Jonathan Fryatt is starting to see problems with field drainage, suspecting that ploughing was hiding an underlying problem. 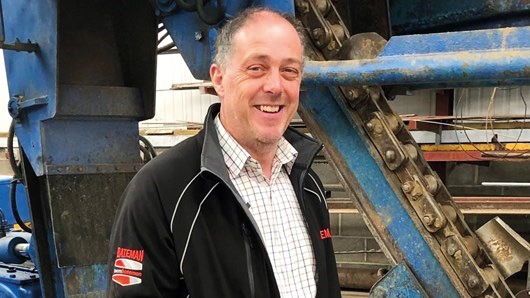 “Going down the direct-drilling route, we are finding it is more important to get field drainage right.” This is especially true in wetter winters like the last one.

He points to last harvest [2021], which he describes as “average at best. We found direct-drilling into wet conditions didn’t work.”

Crops struggled and didn’t tiller well. Other crops that weren’t direct-drilled did all right, he adds.

So this spring, Mr Fryatt started tackling the problem, as part of the AHDB Monitor Farm programme.

He has jetted some drains that were silted up and got them flowing again. The estate has also bought a second-hand 1979 Barth K140 trencher to do its own drainage work. 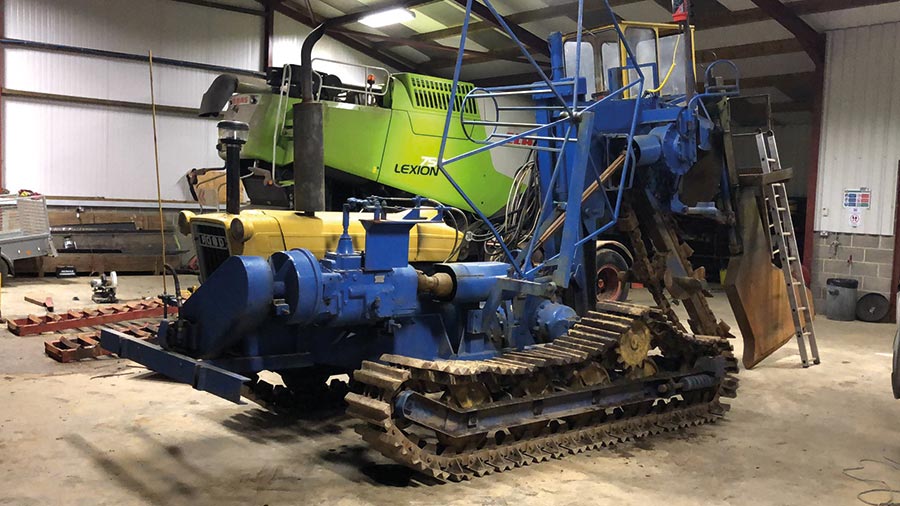 The trencher cost £16,000 including a laser level, and Mr Fryatt has spent £300 on track bearings and just ordered a new chain and sprockets at a cost of £2,600.

“The hope is that if we look after it, we will recoup most of the cost when it comes to selling it once the work is completed.”

So far, 2,500m of new drains have been laid this spring and he is already seeing the benefits.

“We have seen the wet areas disappear. One field that was in long-term set-aside has been reclaimed and now has a crop in it.”

He says that there are another 80ha that need looking at, including Washbeck field near one of the farm’s sand and gravel quarries.

Over recent years, Warwickshire drainage expert Rob Burtonshaw is seeing a growing proportion of his work being with direct-drillers.

Two to three years ago, direct-drillers accounted for 10% of his work. This year, more than 50% of his clients are no-till farmers. 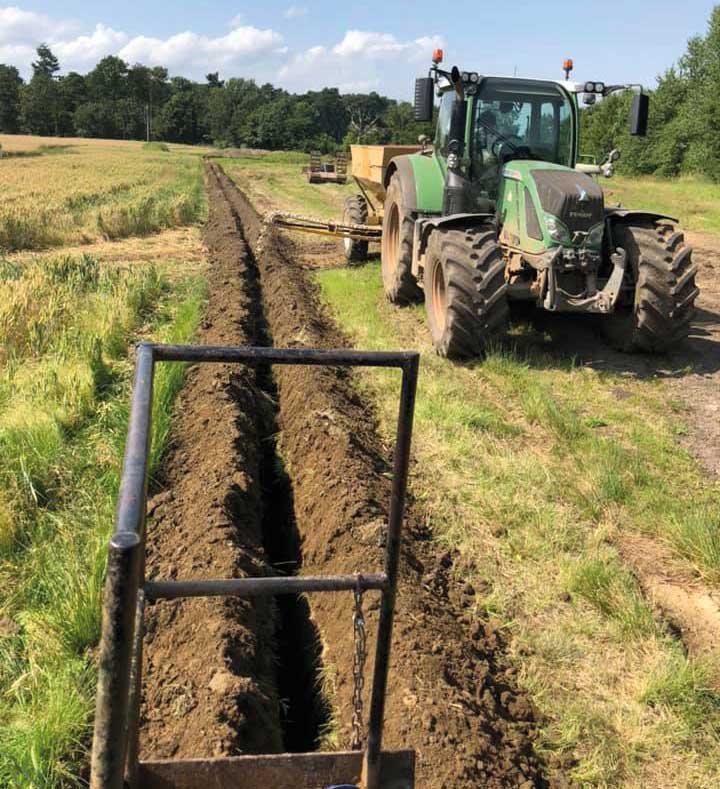 The 5ha field is a clay loam, with a reasonable top soil over a heavy very stony, clay (26%) subsoil. Prior to direct- drilling, there was no evidence of drainage in fields.

Then Mr Fryatt saw distinct lines from aerial shots of a crop of naked oats. In the following crop of barley last summer, he recalled seeing “good crop near drains and not so good in between”.

And they also started to see problems on the headland.

“We dug down and found drains. We didn’t know the field had a drainage system.”

He questions whether ploughing was just masking an underlying problem.

Digging up one section ahead of the Monitor Farm meeting, water flowed out through the gap, suggesting that there was a problem. “We had to dig a strip ditch to get the water away,” says Mr Fryatt.

Warwickshire drainage expert Rob Burtonshaw, who is part of the Monitor Farm programme, says when looking at problem fields, in most cases someone else will have tried to solve the problem.

In Washbeck field, the system is post-war, made from square clay tile pipes.

So the first step is to look out for any drain outflows in ditches or other evidence of drainage pipes.

There may be some old maps or as-built drawings, but look out for the distances marked on the drains.

If the distances look like they have been rounded up or down, then you may be looking at a proposal rather than an actual plan, he says. 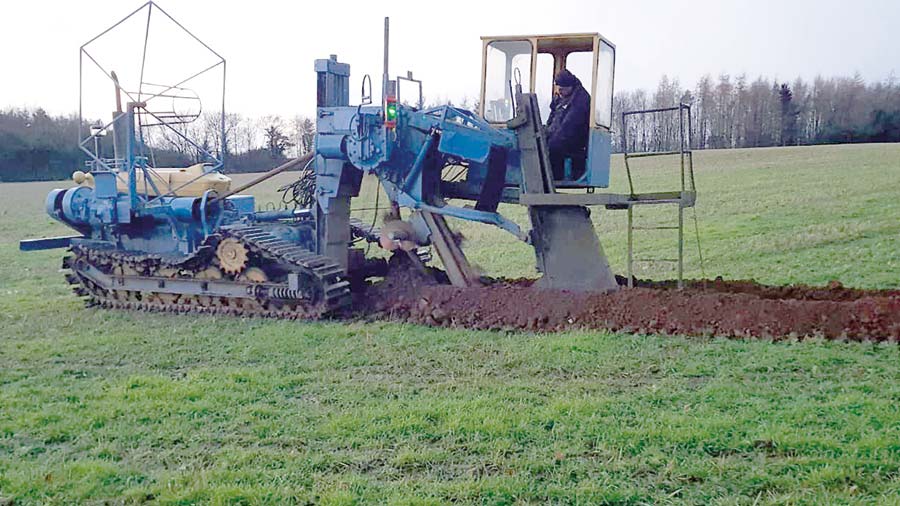 Where there are existing drains, Mr Burtonshaw says the best thing is to repair them if possible.

He points to one of his clients where he eventually traced his problem to a blockage near a hedge and once removed, “it was like pulling the plug from a bath”.

However, he adds that farmers need to be aware that there comes a point when they need to consider replacing drains.

“You may find a problem and then another 10 yards there is another, then another a few yards further and so on.”

At the Monitor Farm meeting, water was flowing out from a 3in lateral. Mr Burtonshaw suspects there is a problem in the 4in main drain.

“With the relatively small amount of rain in recent days, you would not expect to see it filled with water, so I suspect it is damaged.”

Another feature of the existing scheme in Washbeck field is the lack of a gravel backfill, which is needed in clay-rich soils.

This lack of a gravel backfill will dramatically limit the effectiveness of the system, even when the drains are flowing freely, he says.

Mr Burtonshaw explains that gravel is like the cracks in soil, letting water move into the drainage network. 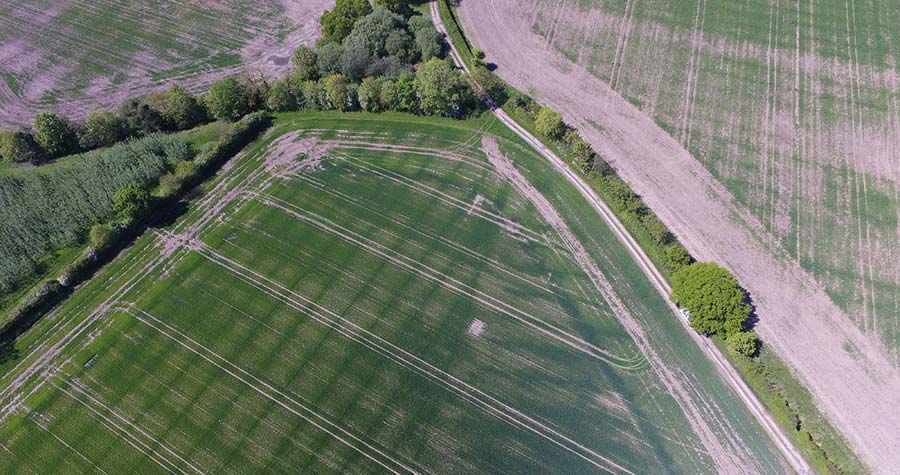 His initial thoughts for Washbeck are to use the ditch that runs along the bottom boundary and run laterals straight into it.

However, due to the topography the  top half of the field will require a main drain and a single outlet into a different watercourse.

Mole draining may also work, but needs to be carried out in the right soil type and in this field the high stone content might cause a problem.

“It’s cheaper to go straight into a ditch rather than using laterals and a main, but you need to maintain the angle to dissect the slope to be effective.

“That’s because you don’t want to go straight up and down a slope. Ideally, you want to dissect the slope one way using the mole drains and the other way with laterals.”

However, the bad news for this field is the need for a gravel backfill, being the most expensive part of a drainage installation, costing more than £15/t or more depending on location.

The gravel backfills will also be vital for the mole drains, allowing water to enter the laterals.

“There is no point having mole drains without the permeable gravel backfill, as you just move water and create new wet spots.”

Gravel needs to be washed and 20-40mm is the ideal size, says Mr Burtonshaw. Water clings to the surface of the stones, so smaller is better.

For example, major sports venues use a 2-6mm stone, but smaller stone costs more to fill.

Looking ahead, Mr Fryatt is planning to install a new system in Washbeck field using the estate’s trencher, backfilling with gravel from the quarry.

“The hope is that improving the drainage will eliminate the wet spot on the headland and lead to more consistent crops,” he says.