The southern edge of Northumberland is dominated by cattle and sheep farms, but Edwin Taylor is successfully growing 1,000ha of combinable crops on land rising to 1,000ft.

Northumberland currently holds the world wheat yield record, which demonstrates the high yield potential of this part of northern England with its long summer days. However, it’s not without its challenges. 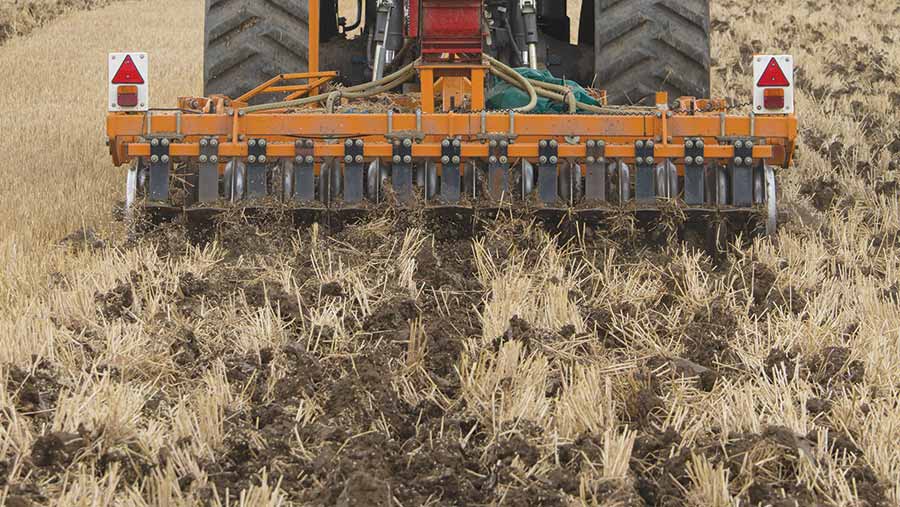 One of these is the weakly structured loamy soils with a high percentage of silt over mixed-up glacial deposits and sedimentary rocks in an area west of Consett. The soil is prone to slumping after tillage and surprisingly – given the altitude – it can suffer from drought in summer.

This soil is suited to mixed farming – but back in 2001 the family partnership, E Taylor & Son, decided to get out of dairy.

“I was more interested in the arable part of the business, so we expanded the cropping area through a combination of acquiring land and taking on farm business tenancies and contract farming agreements,” Mr Taylor says.

He explains that the rotational three- to four-year ryegrass leys helped maintain soil health by building up organic matter levels, aided by the application of slurry and manure.

The business still has a beef enterprise with Belted Galloways and a sheep flock of 1,300 mule ewes, grazed on areas of permanent pasture that are not suited to cultivation

The consequence of losing rotational leys has been in the way soil adversely reacts to the weather and cultivations. “Our biggest challenge is the inconsistency with the weather on the edge of the Pennines and the way our soil reacts to it.”

Mr Taylor has spent the past five to six years developing a system that helps overcome the loss of rotational grass, with the introduction of cover cropping, a move to more diverse rotations and less-intensive cultivations.

Total organic matter levels at Durhamfield Farm look reasonable at 6-8%, but as Newcastle University soil specialist Elizabeth Stockdale explains, like measures of P or K, the total amount of organic matter held in the soil does not necessarily help you to manage the soil.

“The soil can hold organic matter like a long-term bank account: through management practices you can put more in – in crop roots, residues and manures – and the soil biological activity takes some out as it breaks the organic matter down.

An online tool that will help farmers benchmark their soils against their neighbours’ is being developed for the UK.

Using UK data, she explains that soilquality.org.uk will enable farmers to benchmark their soil test results for measures such as P, K, pH and organic matter.

“For example, is 6% organic matter a good number for your soil?”

The Australian version offers factsheets, online calculator tools such as the green manure calculator and videos.

“On this farm, the high level is because a lot has gone in over the years through the livestock and it will also be stabilised by the clay in the soil.”

But she points out that not all organic matter is the same. “There is a huge spectrum of organic materials that have built up the soil organic matter over time. Some of the carbon will have come from plants that lived thousands of years ago.

“Organic matter contributes to the health of soil in a number of ways, but generally it is the biological activity that regular fresh inputs of organic matter support that is important for soil health, not overall organic matter level,” she adds.

However, she warns: “On each farm, application of these principles will lead to a range of different practices – so there is no simple recipe for soil health everywhere.”

Diversity also applies to cropping and she notes that introducing spring cropping means a whole range of changes for the soil.

“Spring cropping brings diversity in timing of growth, cultivations and when nutrients are applied, thereby feeding soil biology. The timing of everything is different.”

Mr Taylor adds that his previous rotation of winter wheat, winter oilseed rape and winter barley was not really a rotation. “It was just an autumn crop.”

He has since increased diversity with cover cropping and spring beans, barley, oats, peas and wheat, the latter Group 1 milling varieties.

However, he adds that it has not been easy to include more spring cropping – his aim is for it to account for one-third of the total cropping area.

To help overcome the loss of profitability with spring cropping, he has added value with peas for micronizing, beans for export into overseas human consumption markets and oats grown for Quaker. Another benefit is that they are cheap to grow.

In addition to applying compost and increasing spring cropping, Mr Taylor has ditched the plough and gone no-till, as ploughing was damaging soils.

He recalls ploughing an area back in 2012 that still has not recovered. “Water sat above the plough pan and it was then that I decided on no more ploughing. It has slumped and gone backwards.”

Drills include two Horsch no-till drills (a 6m and an 8m) plus a 6m Moore drill. While there seems to be a lot of drill capacity, he says it gives them more flexibility and they are a low capital cost.

Both Horsch drills have been converted with Canadian openers, one with 2.5in points and the other with narrower, 0.75in points.

“We have seen differences and where crops have been drilled with the wider points, there has been some slumping. In contrast, the area drilled with narrow openers looks much better – it seems the message is to move soil less.”

But Dr Stockdale adds that it is not simply a case of ditching the plough. “The big problem has been the increased cultivation intensity and reduced timeliness. 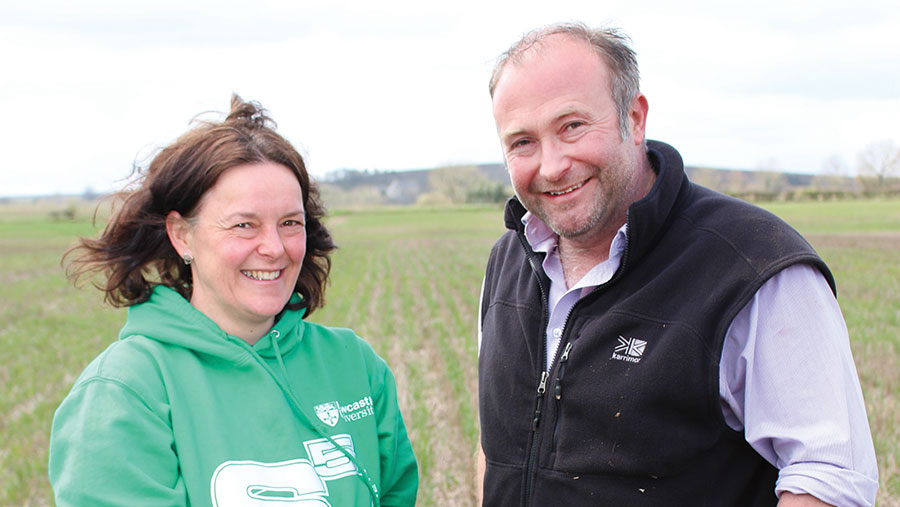 “Forty years ago, ploughing was less likely to damage soil, as the smaller two-wheel drive tractors would not be able to pull a plough in less-than-ideal conditions.

“Ploughing is not necessarily a bad thing if the timing is right and if you can go shallow. But the windows are very small and are difficult to hit for these soils up here.”

Since the change, Mr Taylor believes spring cropping is more consistent as soil is losing less moisture and crops are establishing better. “They are not suffering in a dry spring.”

With cover crops, Mr Taylor often opts for the cheapest option possible, using home-saved seed. He uses what is to hand, but has also tried various mixes of pulses, phacelia and oil radish plus a high proportion of oats.

However, Dr Stockdale adds that getting a crop growing is more important than species choice. She questions the value of some species in the north, where establishment is late – for example, pulses won’t fix much nitrogen and tillage radish does not grow that big.

“You want something green and growing, capturing carbon and feeding soil organisms. About 20-30% of sugars produced from photosynthesis leaks out of roots and this feeds soil organisms, which thrive in soil near crop roots.”

Yields are starting to be more consistent. Last year, wheat weighed across the weighbridge averaged just under 10t/ha and the 10-year average is 8.5t/ha. Spring beans have been consistent performers, yielding 5t/ha.

Spring oats have been another consistent performer yielding 6.2-8.7t/ha for the four years they have been grown – and they are cheap to grow too.

Dr Stockdale says that the long hours of daylight in summer means good yield potential. “This is why an area that some might think is marginal for cropping is offering good yields.”

Learning from other soil-focused farmers

Being a member of a network of soil-focused farmers has been a great help to Edwin Taylor, when looking for solutions.

Biodiversity Agriculture Soil and Environment (Base) was established 10 years ago in Brittany by cover cropping guru Frederic Thomas and is a club of farmers interested in conservation agriculture.

The UK arm is only three to four years old and already has 120 members. It is self-funded with no commercial involvement, he says.

Base members all support each other with varying knowledge in conservation agriculture. “Our aim is to share information and experiences and I have learned a huge amount from it. It has helped us to refine our system and given us confidence to try new ideas and solutions.”

The discussion with Edwin Taylor and Elizabeth Stockdale was organised by BASF.