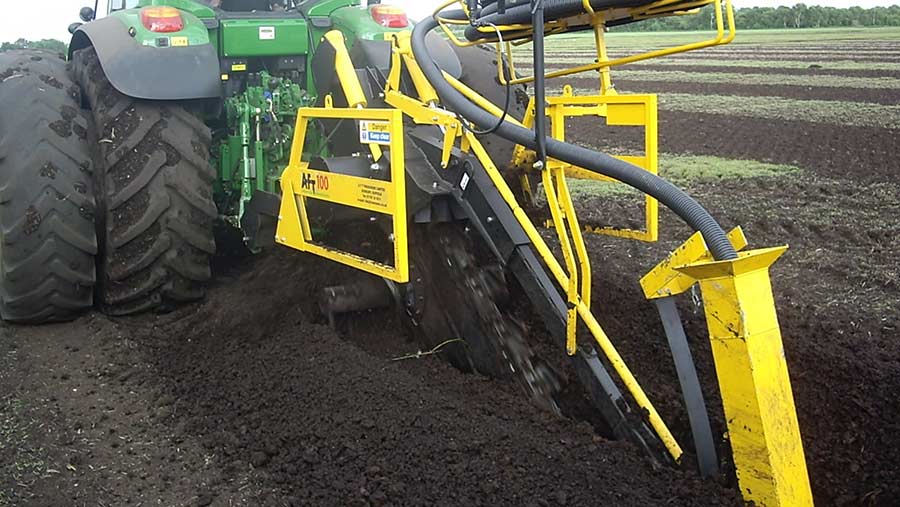 High land values, wet weather and low crop prices have prompted a surge in drainage operations on UK arable farms, resulting in yield increases of up to 35%.

A survey of 400 growers, conducted at Cereals 2016, revealed that more than half (54%) planned to carry out drainage work in the next 12 months.

And it showed that 65% had already invested in land drainage over the past five years, with two-thirds of those reporting that the work had led to increased crop yields.

Andy Cotterill, managing director of drainage specialist Cotterill Civils, which carried out the survey, says the interest in drainage has been unprecedented. He puts the increased demand down to a combination of factors.

“Recent years have been wetter than average and have highlighted the underlying problems of poor or damaged drainage, with ponding and saturated soil surfaces,” says Mr Cotterill.

The slump in crop prices has also added to the number of people updating drainage.

“It makes sense to address drainage problems when crop prices are lower because less potential income is sacrificed when you take land out of production,” he explains.

Buying in productive arable land, at £24,750/ha or more, is less cost-effective than bringing poorly-drained land back into production, he says.

According to case studies carried out by AHDB Cereals & Oilseeds, crop yield increases of 25% are possible when poorly drained land is upgraded with an improved drainage system.

But growers have reported yield increases of 35% where particularly poorly drained land has been improved, Mr Cotterill says.

As well as yield increases, the AHDB lists better soil structure, easier access to land, faster working speed and reduced fuel use among the benefits.

Mr Cotterill adds: “Tackling weeds and pests at an early stage is much more effective and active ingredients are less prone to losses in soil water.

“Likewise, nutrient losses through leaching are lower and other key fieldwork and fertiliser application can be carried out with a more precise timing,” he points out. 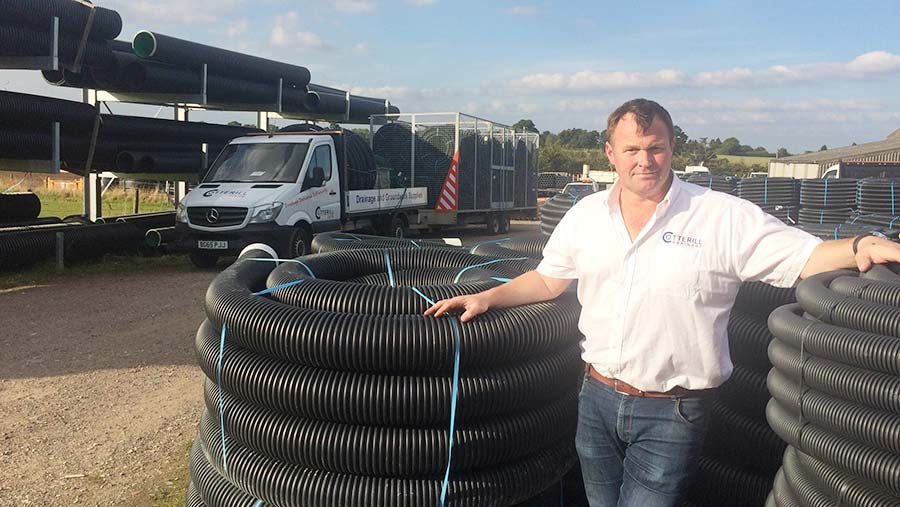 Mr Cotterill explains that the first task when installing a whole system is to carry out a topographical survey and investigate ditches.

Any system is only as good as the outfall – if the water can’t run away, the system will back up and any work will have been a waste of time, he says.

A topographical survey will identify the most suitable outfall at the lowest point.

“An adequate outfall is vital even if it is a few fields away, and may need connecting with substantial pipework of 225mm-300mm diameter.”

Ditches need to be cleared and excavated and any culverts repaired using large-diameter pipework – between 900mm and 1,500mm – to limit future blockages.

Once the outfall of the scheme is designed, the remaining topography is investigated by the surveyor to establish the lie of the land and the number of main drains required.

“Where land slopes only one way, a single main drain of up to 160mm diameter will be enough,” Mr Cotterill says. “Often the land slopes in different directions and main drains either side of the field will be installed.”

Lateral drains comprising 80mm pipes will be set out at 20m spacings across the field to feed into the main drain.

Drains are typically set at about 1m depth, but may need to be as deep as 4m to traverse crests.

Most commonly a tracked, chain trencher is used. An elevator and hopper run alongside the machine and the trench is back-filled with gravel, Mr Cotterill explains.

Although gravel is the most costly element of a drainage scheme, it should not be left out.

“Gravel allows the water to permeate through the soil to the pipe and prevents clogging,” he says.

The gravel quantity varies, but it should extend up to 45cm – or just below plough depth.

Work progresses at about 2ha/day so a typical 20ha scheme is completed in about 10 days.

The length of time taken to recoup the costs of investment varies according to how bad the land is to start with, says Mr Cotterill.

“For an average field where an ageing system is replaced, it will take about 10 years to recover the investment through reduced input costs and improved yields.

“But in cases where fields have been waterlogged or are unworkable, the return on investment period will be substantially shorter.”

Assessing the need for drainage 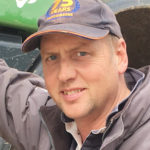 James Startin bought 18ha of land last Christmas and faced two options: to put in a crop of spring beans, or to drain the land and bring it into production this season.

It was lying very wet and, with low commodity prices, the crop would have returned at only breakeven levels, he says.

“It is an odd concept that when prices are low it’s a good time to invest. But it is better to take ground out of production when it is not yielding high returns. Then you are in a stronger position, with well-drained land, when prices go back up again,” says Mr Startin, who was able to call on his father, a drainage contractor, for advice.

Work began in June during a lull before harvest, using his own Barth K140 trenching machine.

“The job was carried out by three of us on and off over a two-week period,” Mr Startin says.

Because of the poor state of the ground, he opted for a full scheme of a 150mm main drain fed by 80mm laterals at 20m spacings. The pipework was put in at a depth of about 900mm.

Although it is too early to establish what the full benefit of the work will be on yields, Mr Startin reports the ground is already drier and the soil structure has improved.

Good drainage underpins the whole farm’s strategy because it maintains crops yields and helps to minimise the variation in performance within a field, says David Jones.

He believes good drainage and soil structure are the best ways to tackle problems such as the changing climate and blackgrass, which thrives on wet land.

“We can get 30mm of rain in a couple of hours and long, mild, wet winters. It is ideal for blackgrass and slugs. Chemicals are less effective on wet land so drainage is the best way to manage the problems,” Mr Jones says.

The business has targeted the wetter land in an ongoing upgrade over the past 20 years.

Like James Startin, Mr Jones’s father is a drainage contractor. “We do the work ourselves, with my father still overseeing the process, using an original Bruff self-propelled trenchless machine,” Mr Jones says.

The most recent field, covering 8ha, was completed in 2014.

The work was costed at about £3,200/ha using five workers and the farm’s drainage machinery. The main drains were formed using 100mm pipe with about 45cm of gravel on top.

“Gravel is vitally important to keep the system working but we minimise the cost by using a recycled, washed stone,” Mr Jones says.

The whole scheme was then mole-drained across the laterals to link up the system.

“We have achieved between 25% to 50% uplift in wheat yields, depending on how bad the field was before we improved it,” Mr Jones says.