“The longer the dry weather goes on the less the [lodging] risk. But, given the way crops have been moving on, if you are going to apply anything it’s now or never.”

“I’m not unduly worried, but I’d be very nervous about using a late-season pgr on winter barley if it’s beginning to suffer from drought or nutrient stress. That’s because there could be an adverse reaction no matter what product you use.”

The key factor is soil type, he believes.

Much of the crop on light land is grown for malting with relatively modest nitrogen inputs. “A lot of it is Pearl, which although it can be tall, stands pretty well, so the lodging risk tends to be less.

“However, the malting variety Flagon has relatively poor lodging resistance.

“It’s the crops on heavier soils, especially those that had chlormequat at GS30/31, that I would say should almost always have a late pgr.” Without a follow-up treatment those that had the earlier pgr can suffer “bounce back”, with the upper internodes lengthening to compensate for the shortened lower ones, he says.

Terpal (2-chloroethylphos­phonic acid + mepiquat chloride) is his product of choice at this late stage. “It does the job and the dose is flexible, from 0.5-1.5 litres/ha, according to how great the lodging risk is.” 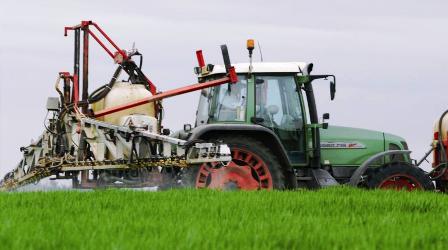 A one-off trial at ADAS Rosemaund last year compared various treatments, including chlormequat and trinexapac-ethyl (as in Moddus), at GS31 and different rates of Terpal at GS37/39.

Researcher Pete Berry found for every 0.25 litre/ha of Terpal applied, wind speed had to rise by about 0.25m/sec to cause stem or root lodging. And withstanding an increase of 1m/sec was worth about the same as one point on the barley Recommended List ratings.