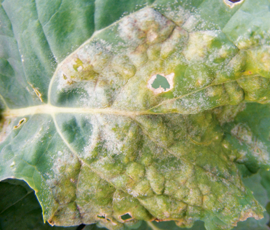 Light leaf spot is the main disease threat to oilseed rape crops this autumn, as dry weather and forward crops could ease the risk of phoma.

Many growers have drilled early with some crops already at the two-leaf stage, says ADAS pathologist Peter Gladders.

“Generally, early drilling is bad news for light leaf spot, but good for phoma as larger plants are less at risk from phoma.”

The smaller the plant, the quicker the fungus can spread from the leaf to petiole and then to the stem.

A key driver for phoma is rainfall in August and September – rain is needed to produce airborne spores. The key threshold to trigger air-borne spore release is 20 days of rain after 1 August.

“We’ve only had 11 days so far at Boxworth, way off the 20 days, so unless September is wet, we are not likely to have much early phoma spotting this season. Growers can assess their own situation by simply counting off the days of rain.”

Another factor reducing risk is that many rape crops were lost this winter, so the area of rape stubbles on some farms is lower this autumn, reducing inoculum for this year. “So it could be a quieter autumn for phoma,” he suggests.

In contrast, light leaf spot is the real risk after a record year with 33% of plants affected this spring and national yield losses estimated at 10%.

“We’ve now had five bad light leaf spot years and it is affecting crops severely in the south as well as in the north.”

Growers should consider two applications of a triazole in October and again in late November for phoma, assuming we reach thresholds of 10-20% of plants affected. In February, a further application may be needed if light leaf spot symptoms are found.

Where light leaf spot is the main target then November sprays need to be followed up by further sprays in the winter (February and March).

Again, stubbles are a key source of spores moving from field to field. “Incorporating stubble and getting some soil cover will reduce spores.” This is more critical now as resistance in popular varieties and fungicides are not very effective against light leaf spot, says Dr Gladders.

Flusilazole is a key fungicide used in oilseed rape, but its revocation by the EU means growers cannot buy it after 12 October 2013. It can still be used for up to 12 months after this date.