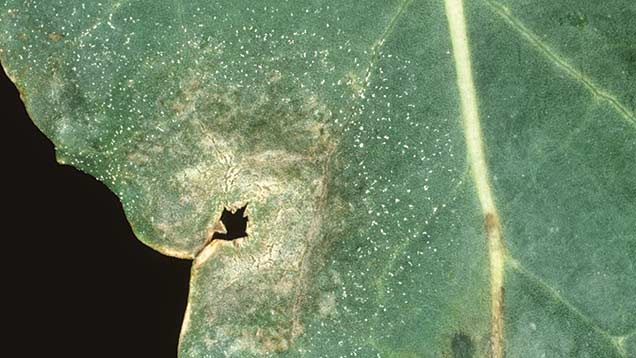 Light leaf spot levels are building to alarming levels in oilseed rape crops and growers should not wait until stem extension to treat the disease.

The problem is becoming ever more acute each year across the UK – and not just in Scotland and northern England, where the disease has traditionally been more of a headache.

With few varieties in the ground having solid resistance to the disease, crops are worryingly vulnerable – particularly where an autumn fungicide hasn’t been applied.

According to Crop Monitor’s preliminary 2015 light leaf spot forecast, almost all of the UK is at very high risk due to last season’s high infection levels on pods and stems, resulting in carryover of inoculum on trash.

She adds that the Crop Monitor risk alert is based on the percentage of crops with more than 25% plants infected, but believes it should be 15% going forward.

“I think we are underestimating the problem and we have data to show that if there is 15% infection when crops reach stem extension, you can expect a yield loss of 5%.

“People spray for phoma in the autumn and expect it will offer enough protection against light leaf spot until a stem extension, but that is far too late and could let the disease take hold,” said Ms Smith at the recent Association of Independent Crop Consultants (AICC) conference near Towcester, Northamptonshire.

Light leaf spot is polycyclic, meaning several infection cycles can occur throughout the season, so ensuring adequate protection is crucial.

“For those concerned about the cost of an extra spray in the programme, remember that the disease can cause yield losses of up to 1t/ha.”
Julie Smith, plant pathologist, Adas

It is also difficult to detect in the early stages and even if obvious symptoms can’t be seen in the crop, the disease may still be present.

Growers are advised to incubate sample leaves for 24-48 hours at ambient temperature in a plastic bag to speed up sporulation and help early diagnosis.

Ms Smith said there is no treatment threshold, so as soon as the disease is detected, either in the field or after incubation, a fungicide should be applied. Growers yet to apply a graminicide – such as Kerb – have the option to combine the two treatments.

“For those concerned about the cost of an extra spray in the programme, remember that the disease can cause yield losses of up to 1t/ha,” she added.

Scottish and English fungicide trials run by the HGCA in 2014 have shown the best products for light leaf spot control are slightly different north and south of the border.

In English conditions, Prosaro just pipped the other products for disease control at half label rate. Yield responses from Prosaro, Proline and Orius P were seen at half rate, but at full rate Prosaro and Orius P gave a higher 0.5t/ha.

In Scotland, disease control was generally poorer, but Proline outperformed the other products significantly for yield and Ms Smith thinks this is partly due to overregulation of small crops by the two co-formulated products that contain the growth-regulating tebuconazole.

“However, combining the data sets and including 2013 trials, the two co-forms are stronger than the straight azole product Proline at half rate.

“At full rate there is no difference, but if you require some growth regulation, keeping the tebuconazole element would be advisable,” said Ms Smith.

Light leaf spot isolates with reduced sensitivity to azole fungicides have been identified, but there is no evidence this is having a significant effect on fungicide performance in the field.

However, Adas plant pathologist Julie Smith said it is a major concern that there are so many azole fungicides being applied to control disease in oilseed rape crops right through the season.

“The same mode of action is being applied in the autumn for phoma, again for light leaf spot and later for sclerotinia at yellow bud or flowering too.

“Even if you are not targeting light leaf spot, you are still selecting for resistant strains and growers should bear that in mind when planning future fungicide strategies,” she added.

There are now alternative products on the market, with SDHI/strobilurin mixtures Refinzar and Pictor available for phoma and sclerotinia control, respectively.

“They could be used either side of an azole-based spray for light leaf spot to bring in some different modes of action.

“Refinzar is currently being assessed for its activity on the disease, but Pictor could help suppress light leaf spot later in the season,” said Ms Smith.