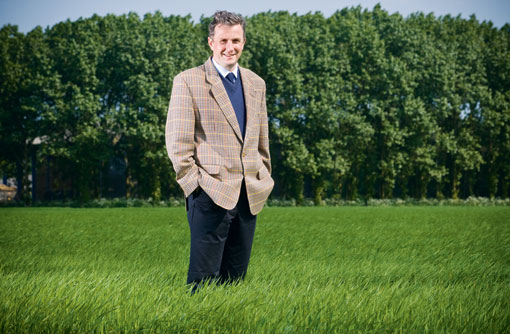 Cereals 2011 event host farmer David Knott is one of those irrepressible farming types, a born enthusiast for the industry, for whom nothing is too much and everything is an opportunity.

His route into farming started with a rural upbringing in the Lincolnshire Wolds, followed by studies at Harper Adams University College, before stints managing farms in Suffolk and South Lincolnshire. The passion is as alive as ever as he explains the dynamic strategy for this diverse Lincolnshire estate.

As managing director of Patrick Dean Limited, a private farming company based four miles south of Lincoln, he is now farming almost 1,500ha and managing a diverse estate, including an intensive pig unit elsewhere in Lincolnshire, a more extensive suckled beef and sheep enterprise in Scotland, 54ha of environmental stewardship and 40 let properties, including three mansion houses.

Chairman James Dean, son of Patrick, and the third generation of Deans to farm at Mere, is relatively hands-off, spending 20% of his time on the Lincolnshire estate, where 1,093ha is managed across three farms, including the Cereals 2011 site at Boothby Graffoe, plus land rented from the Ministry of Defence and neighbouring farmers for growing potatoes, and 240ha managed on a range of stubble-to-stubble contracts.

Further contract farming opportunities are being sought, particularly where a whole estate service is required. “We can offer a management style, capability and capacity, across arable and livestock farming, including estate management, with a willingness to invest capital into contract operations, and a personalised ethos that we feel will appeal,” explains Mr Knott.

His bold assertion has solid foundations. The estate’s success stems from a steely eye to detail, appropriate use of modern technology, a rigorous pursuit of reliable equipment and an extremely well-motivated workforce.

“We look after our staff and treat them as professionals,” stresses Mr Knott. “They all get full training, which equips them with the necessary skills, but also gives them thinking time away from the business. And most of them are on salaries. The focus is on doing a good job, not doing the hours.”

But the biggest driver behind the business’s success is its limestone loams. Most fields are stony and free draining, only becoming slightly sticky where the clay fraction rises. But there are no drains, there is no blackgrass and with a pH of eight, there are virtually no slugs. “It’s girl’s land,” admits Mr Knott.

Potatoes dominate the rotation, with 90ha of Marfona, Saxon and Desiree grown on owned and rented land. Average yield is 60t/ha, amounting to an annual production of about 5,500t, harvested in August/September, with 3300t box stored as late as June in three up-to-date, fully environmentally controlled stores at Mere.

All potatoes are graded and packed just one mile away for Tesco and other retail outlets by Branston, of which the Dean family are co-founders and substantial shareholders.

With average rainfall of just 600mm/year, a comprehensive irrigation system is needed to get water to most of Mere Farm. The abstraction licence is for 195m litres from various spring-fed lakes and winter storage reservoirs.

Sugar beet is the other key root, occupying 150ha, mainly down to Trinita, Saracen, Bullfinch and Carissima. Average yield is 60t/ha, all lifted by a Holmer T3 self-propelled sugar beet harvester, jointly owned and operated with H&J Neville and Son and Blankney Estate.

Last winter, severe frost damage hit 40% of the crop. “We managed to deliver another 12%, by working closely with British Sugar staff at the factory, setting the harvester to take a lot more frosted top off the roots and targeting the least affected parts of fields,” says Mr Knott.

Wheat as a break

Wheat is the dominant break crop in the root-dominated rotation, with 350ha of Oakley, Duxford, Invicta and Cordiale grown for predominantly feed markets, plus some Group 3 biscuit-making and Group 2 breadmaking, although protein is tough to secure on such light land. A quarter of the crop is spring wheat drilled after late-lifted sugar beet. Average yield is 8t/ha.

Part of the estate’s risk minimisation policy sees feed wheat sold on contract at the same time as pig feed supplies are secured, effectively offsetting any adverse price movements. Risk reduction is a big focus for the business, with revenue streams split almost equally between cropping, livestock and estate enterprises.

“It spreads the risk, which is important when unforeseen events arrive. A complete disaster in any one area is a slim risk, but it is one we look at, to see how it would impact the overall business.”

Winter barley is also grown, around 50ha, but malting premiums have proven untenable due to the fertility invested in the root crops. “We can’t have it both ways,” Mr Knott acknowledges. Oilseed rape occupies 140ha and with a healthy gross margin is likely to feature more in future. The varieties grown are Sesame and DK Cabernet, producing an average yield of 4.3t/ha.

Other crops include 45ha of vining peas for Fen Peas, 15ha of game cover and an increasing area of pharmaceutical poppies, up to 20ha this year.

All crops are established following a plough. “We’ve done the costings and on this land it stands up. We have an eight-furrow Kverneland variable-width plough behind a 200hp tractor. With furrows set to remove any compaction, this can cover a fair area in a day, averaging around 16ha, which matches our drill system.”

As to CAP 2013 negotiations and the possibility of a further greening of support payments, Mr Knott is pragmatic. “For us it is less to do with arguing one way or the other, and more to do with spotting which way it will go, so we can think how we will need to adapt our management in response.”

There is also a pig unit on Boothby Graffoe heath, where 520 sows produce about 12,500 pigs a year at a slaughter weight of 78kg deadweight. Finished pigs are sold to Woodheads at Spalding, where fresh pork is packed for Morrisons supermarkets.

The pig enterprise fits in well, with arable labour helping with manure and dirty water handling, straw supply and holiday cover and the pig unit providing muck. “It’s an invaluable source of nutrient for the potatoes, and helps improve the water holding capacity of the soils.”

The company also has a 589ha hill farm in Perthshire, where 160 single suckler Limousin cows produce for the store trade and 700 breeding ewes provide full-grown lambs for the autumn trade.

Mr Knott, who has been at Patrick Dean for 11 years, is well used to hosting technical farming events, having provided the venue for the Beet UK sugar beet harvesting demonstration in 2005. The same site is being used for Cereals 2011, mid-way between the A15 and A607 trunk roads.

As show day approaches, visitors can rest assured that the same meticulous attention to detail that applies to the rest of the business will be invested in the Cereals Event too.

Countryside Stewardship Scheme land covering 54ha of the highest cost land to farm, is destined to move into a combination of ELS and HLS, the latter including 29 ponds and a bird hide under arable reversion. “It’s a very important part of Patrick Dean Ltd, in terms of the ethos of our farming, as well as a revenue stream in its own right,” says Mr Knott.

“There’s no doubt the new HLS rules are stricter and DEFRA is going to get greater value for money. But if we are careful, and clever, we can come up with a combination of stewardship and farming that gives the best results for both. I do believe that productive farming and green farming can run together.” He is fully supportive of the Campaign for the Farmed Environment.

An estate management team of four is responsible for looking after farm equipment and buildings as well as an extensive residential and commercial property portfolio, woodland and wildlife habitats. Persie House in Perthshire is fully staffed and rented out.