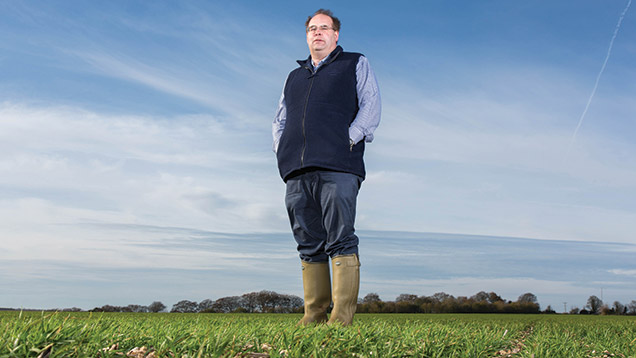 Mr Lamyman bettered his own record set in 2013 of 14.31t/ha as he narrowed the gap on the world wheat yield record set in New Zealand.

In a summer of high yields, Mr Lamyman also scooped the top prize in Adas’ Yield Enhancement Network (YEN) to add to his world record oilseed rape yield this summer.

The yield of his crop of Kielder winter wheat harvested in early September is edging closer to Mike Solari’s 15.7t/ha achieved in 2010 in New Zealand’s South Island.

A key aspect of Mr Lamyman’s success was applying multiple nutrients through the season using foliar feeds which encouraged the production of cytokinin plant hormones in the crop.

He used a product called Delta K nine times throughout the season which encouraged cytokinin growth to bring flowering forward to 30 May  and slow down later growth to extend the grain-filling period.

“These applications encouraged rooting early in the season producing a greater number of tillers and good head numbers from a low seed rate,” he said after an awards presentation on Thursday.

His wheat yield beat 2013 YEN winner Mark Means, who achieved 13.41t/ha with Cordiale on his west Norfolk farm, and Mr Lamyman’s potential 76% yield was ahead of Lincolnshire grower Robert Pask, who won the 2013 category with 69%.

He credited six factors which help push up yields: prompt sowing, a warm winter, a bright March, greater than average rainfall, a lack of heat stress and bright weather in June and July.

The YEN competition, which aims to drive up farm yields by identifying arable innovations, attracted 70 entrants, of which 40 continued through to harvest.

Yields ranged from 9 to 14.5t/ha and potential yields from 41% to 76% and some compared very favourably with Mr Solari’s crop in New Zealand, which gained from higher summer rainfall and sunshine than seen by UK growers.

“Some of our growers beat Mr Solari in making the best use of the resources made available,” said Daniel Kindred, senior research scientist at Adas.