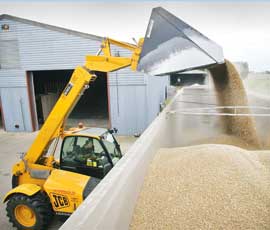 Andrew Symonds cut his winter barley at Lincoms Farm, Hartlebury, Worcestershire, 10 days ago, and is loading it out for delivery today (6 August).

“It was very average really, but that’s better than we might have expected,” he said.

The 23ha of Flagon yielded 7t/ha across most of the field, although poor headlands probably lowered the average to 6.5t/ha.

With no oilseed rape in the ground, the next crop would be spring barley, which wasn’t too far off, said Mr Symonds.

“We’ll be into the spring barley before the wheat – but even that’s not too far off either.”

The 40ha of winter wheat, and spring malting barley which was on contract to Coors, was still standing despite recent showers.

“We had 14mm of rain on Sunday and 9mm on Monday, but it hasn’t been too bad, and hasn’t done any harm.”

With not much winter barley in the ground, farmers had only just made a start on harvest in the area, he added.