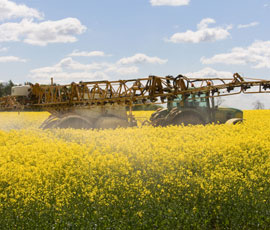 Growers should be aware of the rising disease threat in oilseed rape crops, particularly those that have been affected by lodging this spring, say experts.

The first visible signs of sclerotinia symptoms have been reported in Herefordshire, which is most likely an expression of an infection period in late April, says ADAS plant pathologist Pete Gladders.

“We have experienced another infection period between the 7-9 May, where conditions were conducive to the spread of spores into the crop. We will start to see the consequences of that shortly,” he warns.

The disease risk for sclerotinia often fluctuates in peaks and troughs depending on climatic conditions. So far this year the prevailing cold weather, with heavy rain washing fallen petals off leaves, has not allowed the disease to take hold.

Despite climatic conditions not favouring the disease, the disruption to fungicide programmes have in some cases left crops unprotected against infection or been ineffective altogether.

“There is also a definite increase in risk where there has been lodging and if there is an outbreak in flattened areas, the direct contact between plants means the disease could really run away.

“All you need is one infected plant in a sheet of stems,” adds Dr Gladders.

Temperatures rose earlier this week, prompting fears of further infection, and growers are urged to ensure that crops have protection through to the end of flowering.

“The disease doesn’t have the most considerable impact on yield when infection occurs late in flowering, however, growers should consider the long term benefits of keeping the disease out and preventing sclerotia levels building up in the soil,” Dr Gladders explains.

Lodged crops could also prove to be a haven for alternaria, the fungal disease diagnosed from symptoms of bold black spots 2-3mm in diameter on the upper leaves and pods.

The disease has occurred in low levels in recent years as it favours warm, humid conditions. With temperatures already higher this week, combined with the ample moisture, there could be substantial risk.

“It develops in small patches and cycles very quickly, particularly after thundery weather.

AICC agronomist Patrick Stephenson encourages growers to wade into the crop to see how the disease is developing throughout the canopy, and subsequently make a decision on treatment.

“Previous work shows that you can achieve very good control of the disease at around 20% pod set, or full flower, and at this stage the focus should be on broad spectrum products such as Amistar, Proline or Compass which all give good suppression.

“Where alternaria symptoms can be found on the upper leaves at 95% petal drop a further treatment would be necessary based on similar chemistry,” he adds.

Spring rape, traditionally grown as a low input crop could also be at risk if the wet weather continues in conjunction with warm temperatures.

“Don’t forget about disease pressure in spring crops and treat if there is a serious threat to yield as it may be economical,” Mr Gladders says.