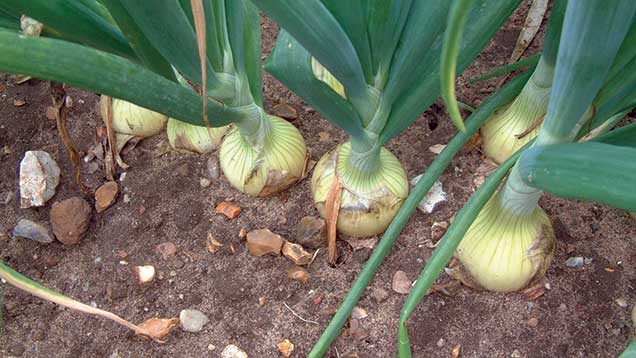 Growing onions is not for the faint-hearted being an expensive crop to grow and like their broad-acre counterparts, there are fewer actives to control yield-sapping diseases and weeds.

As a crop that responds to day length, early vigour is crucial to building canopy before bulbing, so soil type, fertility and irrigation are key to maximising yield, explains vegetable specialist Tom Will.

Planting starts in February with around 70% of the UK’s onions grown from seed on mineral or light organic soils. Spring sets are adopted for early production and/or on land prone to cap, blow or without irrigation. A small amount of overwintered crop is drilled in August or planted as a set in October.

A minimum seven years between crops is advisable due to soil-borne pathogens and their rotational position varies between growers.

“Onions have roots like spaghetti, without many lateral roots, so they don’t search out nutrients well,” he says.

That’s why many growers opt to follow potatoes or brassicas where the background nutrient level is higher, in an available form and well mixed within the soil profile.

To get drilled onions off to a good start 300 litres/ha of a 7:21:0 feed is injected 2.5cm below the seed and followed up with three to four equal splits of nitrogen delivering up to 160kg/ha on a typical mineral soil. Phosphate uptake is around 35kg/ha, potash 150-180kg/ha, and the sulphur requirement is high with 70-100 SO3 depending on type.

Onions are very uncompetitive and only achieve 70% ground cover so soil needs to be as weed free as possible to protect yield and ensure ease of harvest. With few herbicides available blackgrass infested land is a definite no for growers.

Weed control is relentless, starting at drilling and continuing until the onions mature. Most activity is contact with selectivity down to amount of leaf wax.

“The more you push with herbicides the more you dewax which then allows entry for downy mildew – the onion equivalent to potato blight,” says Mr Will.

“But it’s far more aggressive than potato blight and if gets established in the crop it pretty much kills it.”

Wet foliage provides the ideal environment for the disease, so the balance between irrigation, herbicides and fungicides has to be carefully managed.

Depending on the pressure, up to 10 fungicide applications at 10-day intervals are applied from June onwards, rotating products like mancozeb, Unicur and Valbon.

Bulb or root borne diseases also pose a significant threat with fusarium basal rot causing the biggest losses, especially with latent infections which can develop in store and cause whole store write off.

Levels of the fusarium oxysporum pathogen are rising in soils and there are no fungicides to tackle the later season disease. Instead a rotational approach is undertaken with a number of practices contributing to management of the disease including tolerant varieties, managing irrigation, use of biofumigants and building adequate organic matter, adds Mr Will.

Onions have been grown on light sandy soils on the Elveden Estate in Norfolk for over 30 years.

Yet despite farm manager Andrew Francis dubbing them the sheep equivalent of the vegetable world on account of their propensity to die, the estate successfully produces 6% of the UK’s onion crop annually.

However, Mr Francis is concerned that the inherent variable yields, which last season ranged from 38-72t/ha, due to high downy mildew pressure in early drilled crops, could be exacerbated if the availability of pesticides in the crop is reduced.

An independent report, by farm consultant Andersons, warns up to seven active substances could potentially be lost across the crop, resulting in yield losses up to 50%.

The loss of mancozeb, the backbone of downy mildew control and key herbicides against specific weed types on the estate like meadowgrass, nettles and flixweed, would make growing onions more difficult and costly, he says.

“We have seen problems on our other root vegetables in the past three to four years as a result of losing products. Previously we would have had ‘go to’ products to get us out of a muddle, but those products no longer exist so there is no way out of it.”

“The whole vegetable industry needs to understand, look at and is working towards the integration of other control methods, be they genetic, rotational or biological. There is no silver bullet and they are only additions to the ever decreasing armoury that we have got left.”