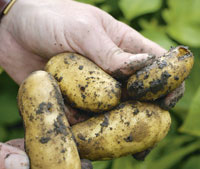 Although the restrictions on metaldehyde use were a blow to growers, independent consultant David Glen said there were still many options available to help reduce slug populations.

Under the new rules, growers can no longer apply more than 210g of active ingredient/ha in a single application. However, Prof Glen, an independent consultant from Styloma Research and Consulting, said metaldehyde was still effective at reducing slug numbers even at a reduced dosage.

But in bad slug fields or bad years, growers may need to consider using alternative approaches alongside metaldehyde, he added.

Speaking at the South East Potato Day, held at Quex Park Estate in Birchington in Kent, Prof Glen started by looking at the impact of cultivation on slug numbers.

“Ploughing and other types of cultivation can reduce numbers enormously,” Prof Glen said.

Straw provided the slugs with a source of food that enabled them to survive and breed, he explained.

Similarly, weed control between crops was another way for growers to keep slug populations down by depriving them of crop volunteers as a food source, said Prof Glen.

“If you can deprive them of crop volunteers by using herbicides or cultivation, you will help reduce slug numbers,” he explained.

Another option was using pellets with other active ingredients. Methiocarb pellets or iron phosphate pellets could be effective, he said, but they should not be used on fields located near water courses, risking diffuse pollution.

Whichever pellet growers used, Prof Glen said timing of application was critical in getting the most out of it, although more research was needed in this area.

Using slug pellets early in the season, shortly after planting, could sometimes be effective, but usually an application later in summer was more effective, Prof Glen explained.

“It is important you apply the pellets when the surface is moist after irrigation.

“If the surface is dry, the slug won’t be active on the surface and the pellets will just deteriorate. The idea with summer applications is to kill the slugs before they feed on the potato tubers.”

Research has shown that single pellet applications between mid-July and early August were most effective, said Prof Glen.

However, pellets were only effective on slugs coming into contact with them on the surface and Prof Glen highlighted research showing that the slugs inflicting the most damage were usually juveniles living in the soil, not on the surface.

Looking to the future, Prof Glen believes parasitic nematodes could be the answer.

“This nematode is capable of killing those slugs living in the soil. It does have some potential and could help now that metaldehyde use is restricted.”

Research has suggested that the nematodes were effective in controlling slug damage in winter wheat and oilseed rape, Prof Glen said.

However, he pointed out that nematodes were more expensive than pellets, making them more suitable for higher value horticultural crops.

He added: “Nematodes are probably most effective against field slugs (Deroceras reticulatum). If you have got a field where you have problems with garden slugs (Arion) and keeled slugs (Milax and Tandonia species), it is questionable whether nematodes will have a decent effect.”

For growers who needed to assess their slug risk, Prof Glen recommended using poultry feed as a suitable non-toxic bait.

“With layers’ mash, slugs come in and feed so it’s important to leave traps out for one night only,” he advised.

“If you don’t go and look for them they go away and you don’t get a realistic estimation of the risk.”