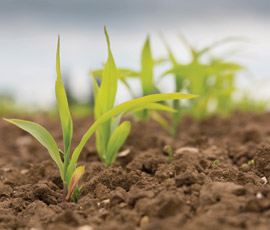 My usually pristine and clean London jeans have been dirtied by Buckinghamshire soil in recent weeks as I embarked on a forage maize trial for my BASIS project.

Scrambling around on my hands and knees counting and identifying weeds in maize has been both enjoyable and rewarding, as it improves my skills and knowledge of this crop.

Weed control is a vital part of maize husbandry, with the crop particularly sensitive to competition in the early stages of development.

High weed numbers can result in poor or uneven establishment and reduce crop vigour, which ultimately results in poorer yields.

Pre-emergence residual herbicides are used widely, but not universally and my project aims to assess the value of these products in forage maize.

It will also be comparing some of the most popular product choices at a full label rate and a reduced rate and will include Stomp, Wing-P and Dual Gold.

My host grower, Daniel Tuckwell, and his agronomist are watching with interest, as their expanding maize area requires robust and cost-effective weed control from pre-emergence, without the need for a follow up spray.

After the establishment and spraying of the trial on the 20 and 21 May I have visited the field regularly and carried out weed counts to compare efficacy of the products.

The different species of weed that have been growing in both the untreated and treated parts of the field have also been recorded to spot any weaknesses in each product’s control spectrum.

Hutchinson’s agronomist Phil Styles, who carries out the agronomy on the host farm, believes it has been a good exercise for both myself as a student and for the growers.

“It’s good for a BASIS student to get down on their hands and knees and carry out this work to develop knowledge and realise it’s not all about just chemical application,” says Mr Styles.

He thinks that in a difficult year for residual herbicides, they have all performed adequately, with not much separating the top two of Dual Gold and Wing-P in terms of efficacy.

Residuals give you a head start and when looking at the untreated, it’s clear to see the benefit that the products are giving us, he adds.

“It will ultimately come down to cost and the grower has to pay his money and take his chance based on the evidence,” says Mr Styles.

With the untreated strips now heavily infested with weed, a post-emergence herbicide is due to be applied to tidy up and protect the crop from any further competition.

The old adage that “the proof is in the pudding” is why this Buckinghamshire farmer and contractor is happy to host my herbicide trial in one of his maize fields.

Mr Tuckwell, who runs the business alongside his father Robert, is always looking for ways of improving yields and optimising input costs. 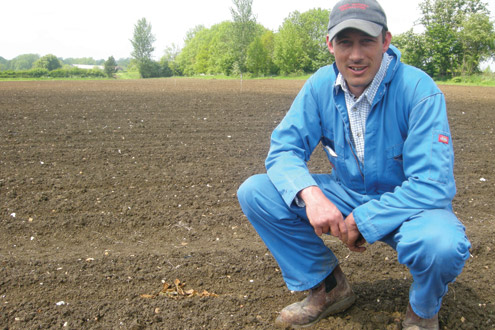 So when he was advised that new BASF maize herbicide formulation Wing-P was offering a step forward from his trusted pre-emergence herbicide choices, he jumped at the chance to find out for himself.

Mr Tuckwell has always preferred the use of a pre-emergence to give the crop the best possible start, free of competition from weeds that can cause problems from establishment to harvest.

“We are happy with Cadou Star or the Dual Gold + Stomp mixture that we have used previously, but it looks like Wing-P could be for us as it has a little more flexibility,” says Mr Tuckwell.

Wing-P can be applied pre-emergence and up to four true leaves and the increased working window is something that Mr Tuckwell sees as an advantage.

The business is currently growing around 350ha of maize for both forage and biogas, so getting around the crop in perfect time can be a challenge, particularly in a catchy season.

With Wing-P costing Mr Tuckwell around £14/ha more than the Dual Gold + Stomp mix, it must show a clear benefit to justify it’s use.

“We will see after the comparison trial and judge the programmes on efficacy and cost. If Wing-P stacks up then we’ll stick with it,” he adds.

The trial had cost Mr Tuckwell and his sprayer operator Haig Toombs both time and money during a busy period, with the grass harvest looming large.

“But I believe the commitment is worth it to gain valuable knowledge on what works on our farm, in our local conditions. You can’t get it from external sources,” he concludes.

Lay the BASIS for cropping success