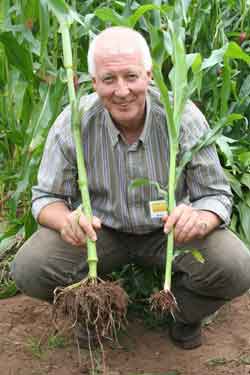 Maize grown under a layer of film could achieve an extra two tonnes a hectare of dry matter, as well as earlier harvesting and the ability to grow in marginal areas, according to Wynnstay’s Simon Pope.

“Maize sown under degradable plastic grows much more rapidly at the beginning of the season thanks to the soil warming effect provided by the insulating layer of film,” Dr Pope explains.

Assessments using hybrid varieties have shown those grown under degradable plastic have a 10-fold increase in root mass in early July compared with the same varieties grown in the open.

“In general, crops grown under a layer of film will achieve an additional two tonnes a hectare of dry matter. The majority of this will come from significantly larger cobs.”

An increase in cob size also means an increase in starch content. “The main reason for growing maize is to provide dairy cows with a year-round supply of high energy forage. Crops grown under film mature earlier and have a greater leaf area for a longer period of time during the longest and sunniest summer days so more sunlight is converted in to sugar.”

Dr Pope says the crops will give increased cow performance and can almost be harvested up to a month earlier.

“This can help spread the workload and helps bridge the gap at the end of the summer when most farmers have finished last year’s clamp and are still waiting for the new crop to mature.”

Increased root size also has other advantages according to Samuel Shine, inventor of the Samco System used to sow maize under film. “Larger roots allow plants to take full advantage of the nutrients in the soil so less fertiliser is required. For farmers growing maize on a larger scale this factor alone can amount to significant cost savings.”