Maize growers looking to protect their topsoil through the winter while avoiding costly soil erosion now have the opportunity to establish a companion crop of grass alongside maize in a single pass.

A new air seeder drill from Pottinger, originally designed to distribute maize and fertiliser together, has been adapted to suit maize and grass seed instead.

Maize stubbles are among the highest risk surfaces for winter soil erosion as the late harvesting date means that crops are often taken off the field in difficult conditions leading to rutting and surface compaction. 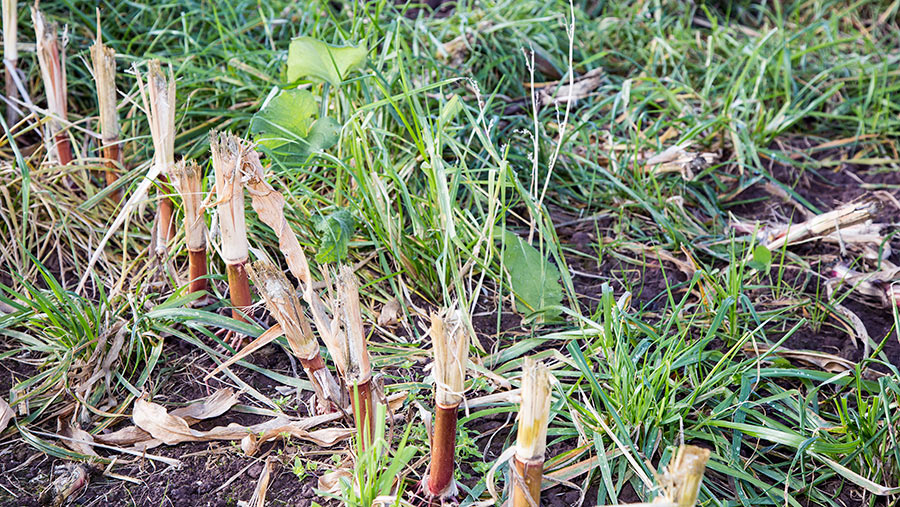 When combined with the recent trend towards wetter winters, this has meant that land with even a marginal slope has frequently been losing soil into watercourses in ever increasing amounts.

“After the bad winter of 2013, 75% of maize land showed high or severe levels of soil degredation,” says Nicola Hall from the Campaign for the Farmed Environment.

“While losing vital topsoil is a loss to the farmer in itself, the cost can be compounded as soil erosion can be penalised under the 2015 cross compliance regulations on soil management.”

One solution to reduce run-off is to undersow a maize crop in order to leave another population of plants through winter to maintain soil structure.

Over on the continent, where there is more stringent soil protection legislation, this practice is more common.

“Grass is typically established when the maize has reached the 6-7 leaf stage by direct drilling in between the maize rows,” says Agrovista agronomist John Ball.

“However, research has shown 30-40% of a companion crop’s biomass needs to be present before winter to have any impact on soil and the later it’s established, the less chance there is of that happening.”

He explains that undersowing is also technically challenging as it is difficult to get in the crop without damaging the maize and having a negative impact on yield.

But establishing grass earlier by planting grass and maize together has not previously been an option as maize is uncompetitive at it’s early growth stages and would likely be smothered.

However, the new Pottinger Aerosem 3002 ADD drill has the ability to control every seed outlet individually from the cab, meaning for the first time the two crops can be kept separate even when being drilled simultaneously. 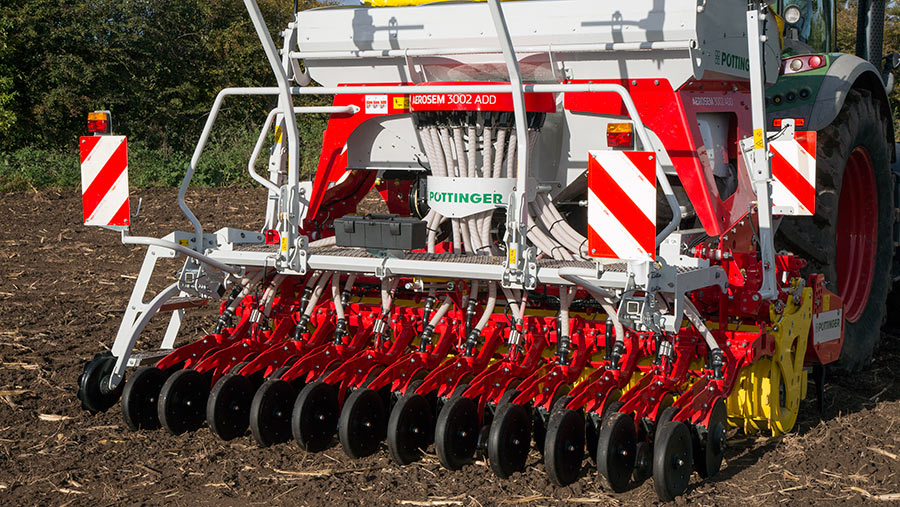 “This drill allows the operator to send maize seed down four outlets at 75cm apart, shut off the outlets on either side, and direct grass down the remainder, giving a 15cm buffer zone either side of each row of maize,” says Barry Humphreys, Pottinger territory manager for Wales and the North West.

“Each final press wheel can be manually adjusted, allowing the maize to be planted more deeply than the grass.”

The drill and the technique are under trial at Reaseheath College in Cheshire where maize production has been increased by 18ha this year to 71ha.

The amount of ground in the UK put down to maize continues to increase year-on-year, with production area doubling between 1990 and 2010.

Figures from the NFU show that in the last year alone there was a 4.4% increase in planting, with the total area now standing at 195,000ha.

For Reaseheath farm manager Mark Roue, the decision to increase the maize area was a simple one. 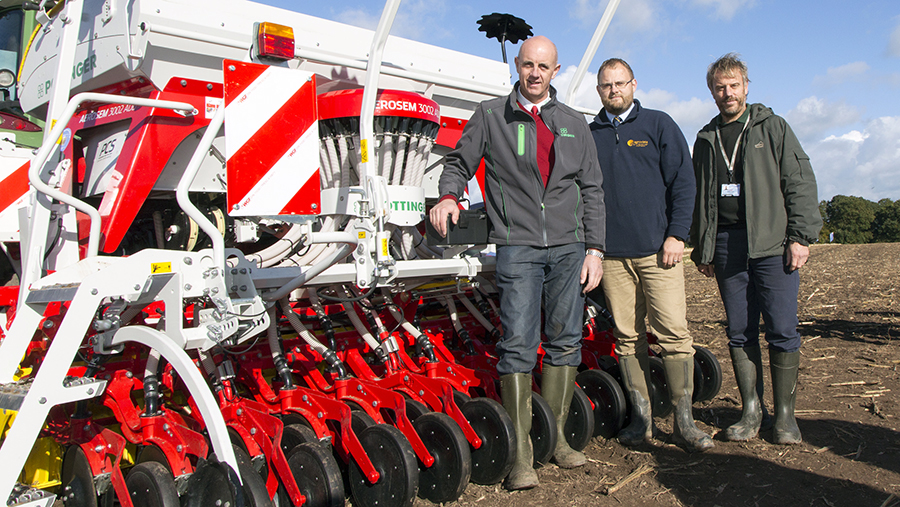 “It has been driven by our need to provide a carry-over for our high yielding herd of 230 indoor dairy cows, and may also provide some fuel for the AD plant which has been completed this year,” he explains.

The trials are looking at how a range of varieties are performing using three establishment techniques, with crops planted using the Pottinger drill alongside the maize on 5 May, using an Aitchinson direct drill when the maize was at the 6-7 leaf stage on 11 June, and after the maize was harvested on 10 October.

The maize was Pioneer variety P7326 which was selected for its early vigour and wide harvesting window.

Companion crop varieties used in the plots that were planted with the maize were creeping red fescue, tall fescue, an amenity grass with and without clover and vetches, and a ryegrass mixture.

“While there is more work needed to look at the benefits on soil structure and nutrient retention, the key finding so far is that none of the varieties showed any yield drag on the maize when established this way,” says Mr Ball.

“However, this has been a good year for establishment with the maize getting away quickly, so that is likely to be different in a more challenging year.”

Tall fescue was judged to be the best all-rounder as it established slowly initially, but then had good output which shaded out many of the weeds in the plot.

It also had one of the best rooting structures and the maize yielded 7% more in that plot compared to the control.

“While we didn’t set out to chase extra yields, this extra growth was potentially the result of the excellent job the tall fescue did at smothering out the weeds,” says Mr Ball.

Of the remaining varieties, all of them established apart from the clover and vetches in the amenity grass mix, as these were taken out by the post-emergence herbicide Callisto (mesotrione), which was applied at the three leaf stage.

“The performance of the amenity grass was interesting as it raced away until 1 August but then it got shaded out by the maize canopy and rotted away almost completely by the time the maize was harvested,” says Mr Ball.

“Like the ryegrass, its early vigour means that it has a high competition potential in early establishment, which could have been a problem in a more challenging year, and it had less rooting than the fescues, which would reduce its potential to prevent nitrate run-off,” he adds.

Over in the direct drilled plots, the ryegrass mix came out on top as its extremely aggressive early establishment was a bonus, allowing it to get going in spite of there already being some shading from the maize.

While establishing a companion crop may be something that growers will be considering for next season, there is plenty that can be done with the stubbles from this season to avoid being penalised under cross-compliance legislation, explains Nicola Hall from the Campaign for the Farmed Environment.

“The bad winter of 2013 led to a strengthening of 2015 cross-compliance soil protection standards, which state that you can fail an inspection by having erosion over any single area greater than 1ha.”

She urges all growers to chisel-plough their stubbles immediately after harvesting as an absolute minimum, adding that harvest shouldn’t be considered over until that had been done.

Other techniques that should also be practised include putting in buffer zones between crops and watercourses, and ploughing across slopes rather than down them.

She also reminds farmers that while maize stubbles are commonly regarded as a place to dump slurry throughout the winter there is a legal application limit of 2,500gal/acre in February, rising to 7,500gal/acre annually.

The law also states that slurry should be ploughed in after it has been spread on stubble.