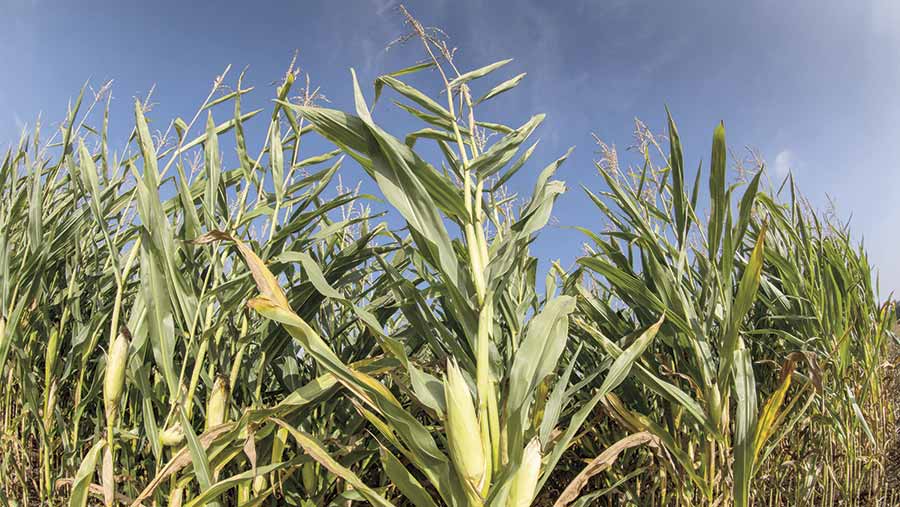 Spraying maize crops with fungicides is essential to control eyespot as the disease becomes more widespread.

Neil Groom, technical director at Grainseed, told attendees at the Maize Growers Association conference last Wednesday (28 February) that results of a trial on a south Wales farm showed applying an eyespot fungicide to maize crops is worth about £180/ha.

The trial revealed that fungicide-treated crops on Simon Davies’ farm in Camarthen saw yield increases of about 6t/ha (see table below).

“I don’t care what product you use. If you have eyespot, spray it.”

Mr Groom believes any damage done by a high-clearance sprayer is negligible given the “massive” benefits of fungicide treatment.

Good maize stubble management and using maize in rotation can also help reduce the effect of the disease.

The trial showed a good response to all fungicides tested, with an increase in green leaf area at harvest, as well as a higher fresh yield and dry matter percentage.

Three fungicide products were tested in the trial:

They were applied on 20 July, when the crop was 6ft, just before tassel, showing no eyespot lesions.

The average green leaf area of the treated crops at harvest was 35.1%, compared with 20.3% for the untreated crop. This corresponded to an increase of fresh yield, dry matter percentage and, therefore, dry matter yield.

The average dry matter yield of the six treated crops was 12.02t/ha, compared with 9.5t/ha from the untreated crop.

Mr Groom explained that, at current maize prices, an increase in fresh yield of 6t/ha, which was achieved with some products, would be worth £180.

The disease causes premature drying of the leaves and therefore a decrease in grain yield.

The disease has typically been quite regional, with more seen in the South West, as it favours cool and wet conditions. However, it is becoming more widespread.

“In the East, we don’t seem to get it as much. Spores are halted at temperatures over 30 degrees,” said Grainseed’s Neil Groom.