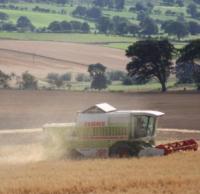 Winter barley yields in Norfolk are about average – and are likely to be the best of this year’s crops, reckons Andrew Dewing of Dewing Grain.

“Winter barley has done well – although yields are just average, the samples are lovely and almost all malting varieties are going into the malting bin.

“It has been coming in at incredibly low moistures – our average is 13-13.5%, although the later cut crops have been caught more by the rain.”

Farmers on the heavier land still had winter barley to cut – and in the next couple of weeks all crops would be ready to harvest, he said.

“We’re going to have some logistical issues.”

Oilseed rape yields were below average, but not as disappointing as expected, and spring barley had been reasonable so far, with the odd exception of some Oxbridge, which yielded just 3t/ha (1.2t/acre) on light land, and some Tipple, which yielded poorly and had a nitrogen content of 2.2%.

“I am expecting poor yields and screening issues in both spring barley and winter wheat.”

Some early wheat had yielded just 4.9t/ha (2t/acre) on light land. “I am fearing the worst – some of the stronger land will have 10t/ha (4t/acre) but there will be some very ordinary light land crops.

“I am concerned about bushelweights and screenings – and we’re assuming a 10% reduction in the national average yield, which will give us a crop of 15m tonnes, dramatically reducing our exportable surplus.”