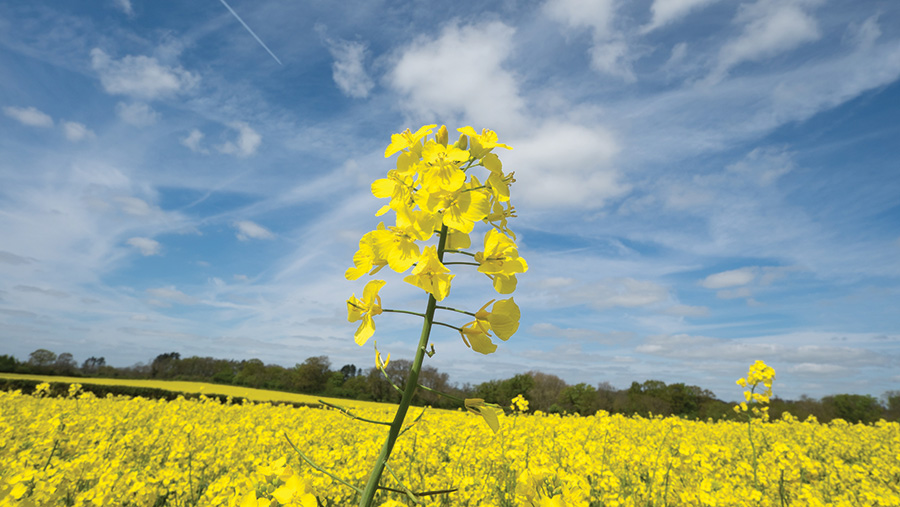 Three leading oilseed rape growers are relying on oil content and other bonuses to make money from their crops due to a tight squeeze of profitability.

Their total costs of production virtually matches the basic ex-farm price for rapeseed so they only make a profit from high oil contents and supplying food-quality oil.

Lincolnshire grower Andrew Ward, James Price from Oxfordshire and Fred French based in Kent all see their growing costs hovering about £255/t, mirroring the ex-farm price.

Despite a range of soils from Cotswold brash to heavy clays and average yields varying from 3.3t/ha to 4.1t/ha, all are just breaking even at a rapeseed price based on 40% oil content.

“We need the Holl premium and oil bonus simply to make a profit,” says Mr Ward, who explains that these two have added up to £70/t to a standard 40% oil rapeseed price.

All are long-term oilseed rape growers who have pared back costs to a minimum with one-pass establishment systems, trimmed back on herbicides where possible and use just a three-fungicide spray programme.

They have drilled a near identical area of rapeseed to last season despite the national fall in cropping and say the crop is still one of their best margin earners.

“It is still the most profitable break crop to grow, and if we don’t grow rapeseed what else can we grow,” says Mr French.

Mr Price adds: “When we look at gross margins over five years there is nothing to compare with oilseed rape.”

Farms 660ha of arable land in south Lincolnshire which ranges from light heath land to very heavy clays with oilseed rape grown in a one-in-three or one-in-four rotation.

He has been growing all high oleic, low linolenic (Holl) varieties for a number of years and this season’s area of 212ha is virtually unchanged from last year, and he uses V316 OL and V324 OL varieties.

Medium-term average yields at his Glebe Farm at Leadenham, 10 miles south of Lincoln, is 4.5t/ha but dropped to 4.1t/ha last harvest which he saw as disappointing.

“Spring malting barley and Holl oilseed rape are neck and neck in terms of profitability, and well ahead of feed wheat,” he says.

He farms 2,340ha of combinable crops on 12 holdings across northwest Kent on  soils ranging from chalk downland to heavy clays, and oilseed rape varies between a one-in-three and one-in-six rotation.

His is growing 547ha of rapeseed, some 80% Extrovert and the rest Excellium and Holl varieties, while his 2,000t plus of rapeseed goes to make Hellmann’s mayonnaise with a £15/t premium.

Based at Clements Reach Farm, Meopham, three miles south of Gravesend, yields last harvest at 4.0t/ha were slightly ahead of his medium-term average of 3.8t/ha.

“Oilseed rape and milling wheat are set to be my most profitable crops this season,” he says.

Farming 680ha of predominantly Cotswold brash, he is growing 127ha of oilseed rape largely in a one-in-five rotation.

The main varieties in the ground this year are Incentive and the conventional variety Campus, and he aims to home save this variety for seed.

Yields in 2015 slipped to 3.3t/ha against a five-year average 3.6t/ha at his Perdiswell Farm, Woodstock, just a few miles north of Oxford.

“Oilseed rape is the only crop that is going to make me a margin this year,” he says.

All three growers are using one-pass establishment methods which cut cultivation costs, while the low soil disturbance can help with blackgrass control.

Nitrogen and phosphate fertiliser are seen as key to get the crop off to a good early start, and get away from any pest problems such as cabbage stem flea beetle

“Fertiliser in the seed-bed helps with establishment, although it can take a while to kick in,” says Mr French.

Mr Price adds getting a crop off to a good start in the autumn can help save on some nitrogen in the spring.

Minimal disturbance at drilling can help reduce herbicide costs and he is saving on a pre-emergence herbicide, and uses just an early post-emergence and then a propyzamide (Kerb) application later.

All are planning on a three-fungicide spray approach, autumn and early spring sprays primarily against light leaf spot, and only one flowering sclerotina spray.

Mr Price sees his variable costs as largely fixed so he is focusing on cutting his fixed costs with his one-pass Claydon drill and low labour requirements.

All three growers have variable costs close to the John Nix Farm Management Pocketbook average of £439/ha for seed, fertiliser and sprays, with Mr Ward on £445/ha and Mr French £458/ha.

With fixed costs such as machinery and labour added then total growing costs come in at just above £1,000/ha for the three growers.

Mr Ward sees his total costs at 1,060/ha so needs premiums on a base rapeseed price of £255/t to make a profit from the crop which last summer yielded 4.1t/ha.

All say trimming variable costs is difficult, although cutting out a pre-emergence herbicide, one fungicide application and trimming nitrogen use could save £50/ha plus.

Mr Ward has been growing all Holl varieties for a number of years, and sold his last crop at a premium of £70/t over the base price for 40% oil content oilseed rape.

These Holl varieties are being increasingly demanded by fast food outlets such as McDonalds and KFC, and £20-25/t premiums for the 2015 harvested crop were useful as prices slumped.

This premium is worth £15/t which comes on top of any oil content bonus, but there are only about 100 growers who are signed up for these contracts.

Mr Price is looking to maximise his oil contents to boost returns and would look at Holl varieties if he took on some virgin oilseed rape land and so reduce any contamination risk with non-Holl oilseed rape.

This roundtable with the three growers took place at the UK headquarters of major oilseed rape seed supplier Monsanto.