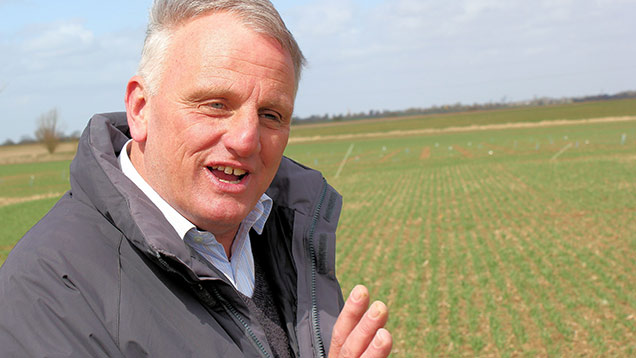 Colin Lloyd is looking to tear up the blueprint for growing spring malting barley and sees a new place for the crop on heavy land to meet new markets.

Malting barley is traditionally drilled early on light land with low levels of nitrogen fertiliser to meet maltsters’ needs, but he believes it can be grown on more fertile soils and still used for brewing.

In addition, a high-yielding spring barley malting crop can beat the profitability of second winter wheats due to its lower inputs, and also give the chance to control ubiquitous blackgrass.

He sees an opportunity for heavy land growers to turn to malting barley to produce for brewers who demand grain with slightly higher-than-normal grain nitrogen contents.

Therefore, he is looking at breaking some of the taboos by growing spring barley on good wheat land, sowing after end-March and using more than 120kg/ha of nitrogen fertiliser.

He says that spring malting barley is attractive as a 7t/ha crop is forecast to give a gross margin for harvest 2015 of £615/ha compared with an 8t/ha yielding second winter wheat at £494/ha.

One market has now opened up for higher-than-normal grain nitrogen malting barley from the world’s biggest brewer Anheuser-Busch InBev, which is looking to source UK barley for its Budweiser beer.

This gives growers the chance to meet maltsters’ requirements while pushing up yields by using more nitrogen fertiliser and boosting profit.

The old adage for growing spring malting barley is to grow it on light land, sown as early as possible, apply only 100kg/ha of nitrogen and all by early tillering to keep grain nitrogen below 1.65%.

“This is giving us more yield but still keeping within the malting specification of nitrogen grain content of 1.8-1.9%,” he says.

AB InBev, which also brews Stella Artois and Beck’s beers, has had to import malt from the continental Europe to produce Budweiser due to the absence of a suitable barley variety in the UK, but it is now looking for domestically produced malt using UK grown Explorer spring barley.

For this season, Agrii is linking with grain trader Glencore and has located growers to grow Explorer to be malted by Crisp Malting Group at its plant in Great Ryburgh, Norfolk, for the production of Budweiser.

Mr Lloyd has been growing Explorer for three years at Agrii’s heavy land research and development site at Throws Farm in Essex with some success, and the group now has the rights to the variety in the UK.

He says the variety has matched the yield of popular malting variety Propino, while being earlier to mature so it could be useful in giving growers an early entry into a following crop of oilseed rape.

For this season all the area required has been contracted, but there is an expectation of an increased area requirement for harvest 2016.