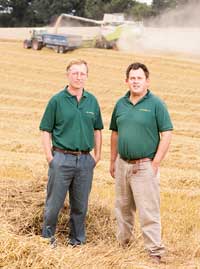 As harvest gets into full swing at HBH Farming in Oxfordshire, Paul Spackman discovers how the massive workload is managed across the 6500 arable acres

Since forming the HBH Farming joint venture six years ago, neighbouring farmers Guy Hildred and Edward Bishop have gone from managing their own farms of 2000 acres and 1700 acres respectively to a combined arable area of more than 6000 acres this harvest. What’s more, it has all been achieved with the same number of staff and less kit, resulting in machinery costs being slashed by half (see box).

Neither appears daunted by the logistical challenge of farming such a large area and both say that joining forces has freed up enough time for them to focus on running the business – even at busy times – rather than being “stuck on a tractor seat 12 hours a day”.

“Compared with six years ago, when we were all running around flat out, harvest really isn’t that difficult for us now,” says Mr Bishop. “We’ve got such a range of soil types – from light gravel to heavier clay – that naturally helps to manage the workload.

“The biggest challenge is making sure everything is in the right place at the right time, but once that’s sorted, things generally run ok, although you need motivated staff who can get on with the job.”

HBH runs two Claas Lexion 600 combines, each supported by a dedicated team of two or three tractors and trailers, depending on how far grain has to be moved to store. Four or five casual staff are also employed during harvest to help with tasks such as corn carting, discing, rolling and grainstore cleaning. “The extra staff cost us about £15,000 in total, which is probably £5000-£6000 more than the minimum we could get away with,” says Mr Hildred. “But for the sake of £1/acre, that extra help is worth it for the peace of mind and the fact it allows me and Ed to focus on other things and sort out day-to-day problems.”

With a total combinable crop tonnage across HBH approaching 20,000t, he admits that a large amount of their time is spent loading lorries. “We probably see about 600 lorries in a year and a lot come at harvest for seed crops and oilseed rape, so it’s quite a task in its own right.”

HBH has enough bin and on-floor grain storage for most of the arable area, which allows both partners more flexibility for when crops are sold through the season. Overall about 20% of the HBH tonnage has been sold forward, with both partners having committed most of their oilseed rape earlier this year, and two-thirds of Mr Bishop’s spring barley has also been committed at £130-£140/t. However, both regret selling only xx% of the HBH wheat crop forward, especially as the price has fallen significantly over recent weeks. “We didn’t sell enough forward, but I’m optimistic prices will come back and at least we’ve got the storage capacity to hang onto it,” Mr Hildred says.

After getting caught out by buying all fertiliser early last year and watching the price fall later in the season, Mr Hildred was initially sceptical about a repeat performance this year. However, the new season prices announced by GrowHow and Yara in June proved too attractive and after lengthy discussion with fellow HBH partner Vaughan Williams – who has a background in commodity trading – three-quarters of HBH’s total requirement was bought early.

“We’ve still got some of the expensive fertiliser from last season to use because we replaced some of the winter rape with spring-sown rape. We’ll also probably use a similar amount of green waste compost again. The compost has a high potash content, so fits in quite well given the price of potash is still up at £410-£420/t at the moment.”

The business has also just taken delivery of 50,000 litres of red diesel to see them through the first part of harvest. “By buying in bulk, we got it for less than 40p/litre, which is back where it was 18 months ago and pretty much half of the price this time last year,” says Mr Hildred. That’s welcome news, especially considering that when HBH’s two combine and corn cart teams are running at full tilt, they get through up to 3000 litres of fuel a day and at least 1500-2000 litres a day is needed for autumn cultivations. “Fuel’s such a massive cost for us it’s a relief to see the price come down this year.”

Most inputs are bought through the Orion buying group, as this allows them to benefit from bulk purchasing economies of scale and means that much of the time needed to find the best deal is outsourced.

Total production costs for the 2009 HBH crop may be up 28% on last harvest due to expensive fertiliser and fuel last autumn, but pooling machinery has allowed HBH Farming to halve machinery costs for the two parent farms, compared with before the joint venture started.

With all four main tractors and both combines on dealer service agreements and monthly finance payments, there is also a more even cost structure throughout the year, he adds. “We’re actually farming our own farms pretty cheaply now.”

Mr Hildred estimates that most equipment on the farm is running at about 95% of total capacity, although this varies between machines and depends a lot on the weather. “If it’s dry this year we should race through, but if it’s like last year, we could struggle and may need to get extra help in.”