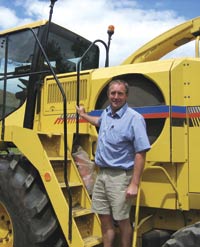 George Perrott doesn’t go much on crystal ball-gazing industry reports, but he does agree with recent conclusions from DairyCo and Kite Consulting that say there is a bright future for efficient dairy units.

Clinton Devon Farms has two 250-cow herds, now fully organic. Yields of the spring-calving cows are running at 24-25 litres/day, equivalent to an average of just over 7000 litres/year. “It’s a way off the 8300 litres we were getting conventionally but, at 32p/litre, I’m still confident the move to organic was the right one. I don’t think Dairy Crest is paying us enough, but hopefully things will improve when the economic situation picks up.

“We’re lucky we’ve got the economies of scale, a fantastic climate for grass growth and the backing of a big family committed to agriculture and forestry with the foresight to invest in the future.”

But, even with this backing, scale and capacity to expand the herd, Mr Perrott acknowledges times are tough and he is constantly “tweaking” the system to trim costs. “I do believe there’s a bright future, but at the moment we’re just going to batten down the hatches and ride out the storm.”

Reducing feed costs is a key part of this belt tightening and a number of changes have been introduced this season. Ironically, this started with spending £50,000 on a second-hand New Holland FX48 forage harvester, to reduce the reliance on contractors and allow more timely silage production. “The £45-50/acre we would have spent on contractor silaging easily covers the cost of the machine and, by getting timelier clamping, we can remove the need for additives, which can lead to big savings.”

Output of over 100 acres/day is about double that of the old trailed forager, and with grass/clover leys now spread across the whole arable rotation for soil fertility building rather than all being close to the dairy, Mr Perrott says it is a bigger logistical challenge to manage the clamping team. “Depending on how far we have to cart grass, we run up to five trailers to keep the forager going.” 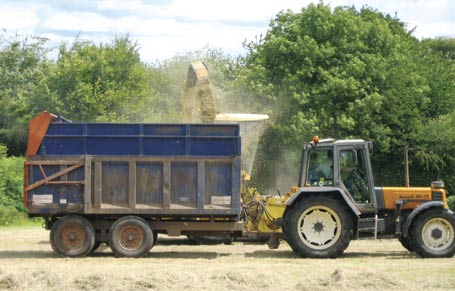 Very little silage will be baled this season, as most of the youngstock will be fed clamp silage instead to reduce costs and cut down the amount of plastic waste, he adds.

Another significant change is that most of the farm’s 750-800 acres of cereal crops – wheat, oats, triticale – will be used to feed the livestock on Clinton Devon Farms. “We used to sell a lot to local feed compounders, but we have got the facilities to roll our own grain and can get a contractor in to crimp what we need.” Each cow requires around 1.5t grain/year, so over 600t of grain will be needed in-house, he reckons.

Another 200-300 acres will be harvested early as wholecrop silage, depending on how crops look. “I favour combining as much as we can because you get the grain and straw, but wholecrop does give us the opportunity to tidy up weedy fields and hopefully stop weeds shedding vast amounts of seed later in the summer. We’ve made good quantities of red clover grass silage – 3000-4000t so far – so hopefully we will be able to minimise the amount of cereals used as wholecrop.”

Any grain surplus to requirement – thought to be around 200t – will be crimped or rolled and sold directly to neighbouring organic farms. “We haven’t sold anything forward and won’t until everything’s gone over the weighbridge and we know exactly how much we’ve got,” says Mr Perrott.

Storage is not an issue at Clinton Devon Farms, as there is enough on-floor capacity for a conventional 1600-acre farm. “We’ve got space for about 4,000-4,500t, but with yields of 1.5t/acre instead of just over 3t/acre, we will probably only need around 1200t for the organic cereals. We didn’t want to convert stores to animal housing, because if we do ever go back to conventional cereal production, we’ll need the extra storage.”

But the space is not wasted as Mr Perrott uses it to store bedding and feed bought out of season, as well as other estate materials. He believes around £5/t can be saved by purchasing bedding in August, compared with buying it in October or November when most cows are housed.

He doesn’t employ the same bulk forward-purchasing when it comes to red diesel though. “I’m concerned about the security of having 10,000+ litres around all the time, so generally I buy 4,000 litres or so at a time, which is just enough to keep us going for a few weeks.”

He says prices have come back about 2p/litre recently and, after shopping around, a load bought last week cost 40.65p/litre. “Cheapest isn’t always best though. I have noticed that it is becoming more prevalent that the cheapest price often can’t be delivered within a week or two. So, part of the quote procedure now is to get suppliers to agree to the amount and the date I want it by.”

Commenting on the future of stewardship schemes, Mr Perrott firmly believes they are good for Clinton Devon Farms, which has been part of the Organic Entry Level scheme for the past two years. Over 120km of hedges are covered by the hedgerow management options – not surprising on a farm where the average field size is just 5ha (12 acres). “We had no trouble meeting the 30 points/ha requirement; it’s just a shame we are limited to that, as it would be nice to be rewarded for doing more.”

Mr Perrott is considering entering the Higher Level Stewardship scheme; the farm has an historical settlement just below one field, and it could be worth 600 points/ha not ploughing it. “It is a 10ha field, so could be worth quite a bit,” he remarks. Other fields could also suit wetland conservation options.

Over 420 people visited Clinton Devon Farms when it took part in Open Farm Sunday on 7 June.

“The whole event was a huge success,” says Mr Perrott. The farm laid on tractor and trailer rides, milking and shearing demonstrations, plus a display of farm products. “It can only have done 400 people’s worth of good PR for the estate and the farming industry in general. It was a lot of work for the team to organise though, so I don’t think we’ll do it every year.”

At the start of July the farm also played host to 10 economists and advisors from DEFRA’s London office. The group was brought down for a day to improve their understanding of practical farming and the challenges faced. “We got them up milking at 5am, took them around the farm and spent some time in the farm office, so hopefully it gave them a real taste of what goes on,” says Mr Perrott.