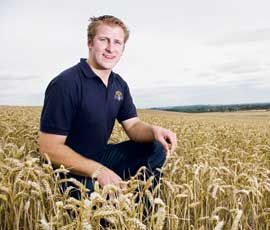 Aerial mapping could be key in the battle against blackgrass, according to Cambridgeshire farmer Edd Banks, who is in his first year of trialling this method.

Mr Banks, who inherited a large blackgrass problem a few years ago, sees using GPS satellite mapping via an aircraft as another useful tool in his fight.

“The main problem is that I have absolutely no post-emergence control over blackgrass, as there are both types of resistance present, and using GPS to target specific areas will undoubtedly save money,” he says.

This integrated approach has helped to reduce his severe blackgrass down to some patches in his fields and he hopes the aerial approach will help further.

Mr Banks is working with Bayer CropScience on his weed mapping, with the company looking to see if aerial photography will be a useful tool against blackgrass and other weeds.

“On larger farms it is often very hard to get a visual inspection done on all the fields at the right times of year,” says Tim Holt at Bayer.

“In the past, manually assessing fields and patch-treating has not been all that successful, as missing just one plant can create new problems next year”, he adds.

One blackgrass plant is capable of producing up to 2,000 seeds, and so can hit crop yields dramatically.

Bayer is already looking further into the future with URSULA technology, which uses drones, and the group is using both technologies on trial sites in Lincolnshire and Cambridgeshire.

The aim of the project is to create a detailed picture of each field and its blackgrass populations.

This will mean any blackgrass patches can be monitored annually in terms of size and location, with a view to eradication.

The aerial photographs will be processed to create maps where glyphosate can be used pre-harvest as well as other GPS-based programmes, including variable seed rate application.

“Now is the time to consider what your plan of action will be for the next growing season,” Mr Holt says.

Mr Bank’s long-term plan is to reduce blanket spraying in favour of spot-treating areas of blackgrass and other weeds using weed maps.

His first introduction into the world of GPS technology was through his combine for mapping, so moving to weed mapping was an obvious move.