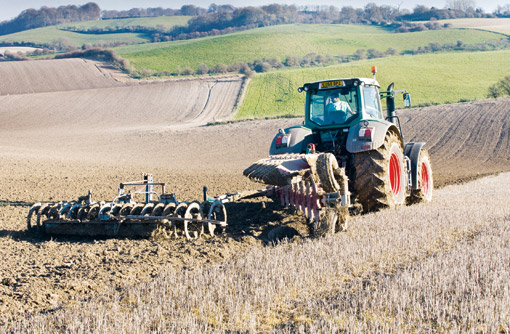 Gross margins are set to narrow next season as input prices increase. Olivia Cooper takes a look at the options and how they compare for 2013

Wheat and oilseed rape prices remain relatively strong for the 2013 harvest, so one might imagine a continued shift to these winter options. But a growing problem with blackgrass and other grassweeds, as well as persistently high input costs, could see a move to spring break crops.

According to Graham Redman, partner at The Andersons Centre, gross margins for all the main crops will narrow next year, but the order of profitability will probably remain unchanged.

“For some farmers, wheat will come out on top in terms of gross margin,” says Mr Redman. “If the biofuel plants start operating at capacity, as we’ve been told they will, it will undoubtedly change the face of agriculture in the UK. It will add 2.2m tonnes to the UK consumption requirement, and farmers along the east coast will be more likely to grow barn-filling feed wheat.”

However, demand for milling wheat remains strong, and despite poor milling premiums throughout 2011-12, forward premiums are considerably more promising. “If premiums are rubbish in one year, it tends to drive people away from growing the crop, which usually means premiums will go back up again.”

But it is not just about the headline price and gross margins, he adds. “The gross margin is a tool to compare the performance of crops that use the same overheads, and is far from a measure of profit.” Farmers also need to consider spreading the workload during harvest and other busy times of year, and the importance of rotation to boost soil fertility or reduce the pressure of disease and weeds.

“Legumes have fallen out of favour this year; there may be fewer combinable peas in the ground than linseed, which has been gradually building up and is now covering more than 30,000ha. The bean area is also down about 20%, but a lot of people find spring beans are an important part of the rotation, even if they don’t provide the highest margin.”

With so many blackgrass problems in cereals, more people are planning to re-introduce spring break crops, says Andrew Wraith, head of agri-business at Savills. “However, if the margins look good, come the autumn they will probably just go with wheat and oilseed rape again.”

Nitrogen fertiliser is looking slightly cheaper than this year, with imported AN opening the season at about £280-285/t and domestic AN at £290-295/t, compared with £310-315/t last year. “Phosphate and potash are still relatively expensive, so it’s important to test your soil and only apply as much as you need.”

Red diesel costs will be slightly higher than last year, at almost 70p/litre, and although seed will be much the same, dressings could add to seed prices, he adds. “Because we’ve seen quite a lot of disease this year, people might choose to use more seed dressings this autumn to reduce their exposure to risk.”

Although cash is king, Richard Levin, partner at consultant Brown & Co, says that keeping the land in good heart is vital. “For most farmers, the recent rotation has been two wheats followed by oilseed rape, but with prices where they are, some have dropped the second wheat and are down to just first wheat and rape. As a result, they are seeing more disease and weed problems, which is affecting yields. It’s definitely better to stick to a good rotation rather than opt for the short-term buck.”

Whatever farmers choose to grow, it is important they budget for all farm costs on a per tonne basis rather than simply considering headline prices and gross margins, he warns. For example, milling wheat yielding 9.5t/ha will have variable costs of about £500/ha, plus fixed costs (including storage) of about £565/ha. Add in general overheads and the cost of production could easily reach £130/t without including interest on bank overdrafts and loans.

“With milling wheat at about £160/t, that leaves a decent profit, without accounting for the single payment and stewardship scheme payments,” says Mr Levin. “But if the price drops, or milling quality is not achieved, you will need these as a buffer.” Of course, the most profitable crops also have to be balanced against less profitable break crops. “Once you know your true costs of production you can develop a marketing strategy – don’t leave it to the last minute.”

Prices for harvest 2013 look slightly weaker than this year, and will follow this season’s trend until planting estimates start to dominate the market, says Jon Duffy, trading director at Frontier. Group 1 milling premiums are considerably better than 2011 harvest, at about £22/t, but will clearly vary depending on the quality of the harvest.

“If you are traditionally a good milling wheat grower, there is no reason to change. But if not, high-yielding feed wheat is probably the way to go.” The same is true of malting barley, he adds. “There is a huge amount of spring barley in the ground this year across Europe, and the danger is that premiums will drop as a result. Often, that means people will drill less malting barley – but quite often the best choice is to do the reverse, as reduced supply could boost prices back up again in 2013.”

Prospects for oilseed rape remain extremely good, with many growers again likely to achieve about £400/t including bonuses. “The EU is in ongoing deficit and the UK is usually in surplus, so I’m fully expecting a big crop to go back in the ground this year.”

Export demand to Africa for good-quality beans will also remain firm. “If you can get the right quality, they will pay, but you’ve got to be growing for a premium market. Once feed beans get up to £50/t over feed wheat demand will drop off rapidly.”

Any cropping decisions made now will soon be costing farmers money in the form of seed, fertiliser and so on, he adds. “It would, therefore, make sense to lock in some of your margin now. Prices might go up further, but if we get two bumper world harvests in a row, markets will come down, so it would only be right to sell something forward if you can see a profit.”

Of course, farming doesn’t always go to plan – and if we have another wet harvest this year, drilling oilseed rape by the end of August may prove a challenge, says Mr Levin. “You could look instead at winter or spring beans, linseed, spring oats or barley. None of the margins may be as good, but they carry significant agronomic benefits – just make sure you are growing for an identified end market.”

Other considerations include maturity dates, cash flow and future cropping plans. “A lot of farms are pretty stretched in terms of labour, which is why block cropping is so popular – if you have too many different crops it is more demanding on your time and storage. If you stick with what you’re good at, keep a decent rotation, know your costs of production and lock into a margin when you see one, you won’t go far wrong.”